As part of our new “Meet Your Farmers & Makers” series, here is a Q & A with Rob DiTursi (RD), General Manager of Ana’s Empanadas. Keep reading to learn more about Ana, Rob and their scrumptious  handmade empanadas. 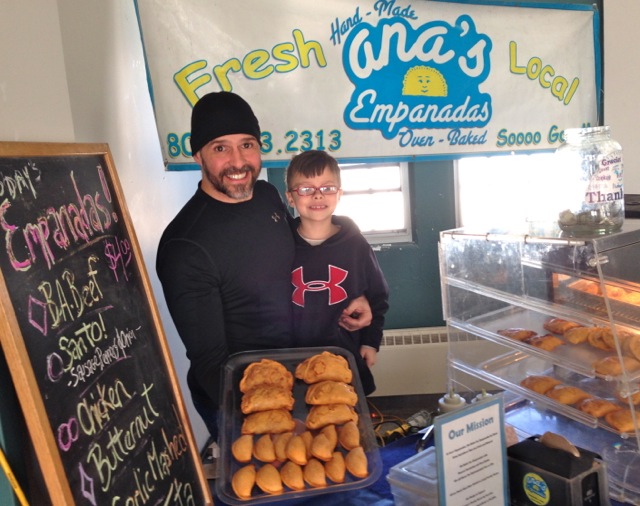 (SFM) Where were you born?

(SFM) What was the first album you bought?

(RD) “Oh it was The Monkey’s Greatest Hits on a two vinyl set.”

(SFM) If you could only eat one meal for the rest of your life what would it be?

(SFM) What is your guilty pleasure (travel, food, recreation, etc.)?

(RD) “Recreation for sure.”

(SFM) What is your favorite book?

(SFM) If you could go back in time, what year would you travel to?

(RD) “Wake up early, in the summer, have breakfast picking raspberries and blueberries mixed with some fresh yogurt, sit on the grass, listen to the birds and eat it. Then, clean up around the house a little bit, maybe mow the lawn, maybe garden, then I’ll go for a workout, or a run in the forest, or swim in the reservoir (middle of Green Mountains). Then end the day with a campfire and BBQ with my two boys.”

(SFM) If you could have dinner with anyone (past or present), who would it be?

(SFM) How do you recharge?

(SFM) If you could have a super power what would it be?

(RD) “Oh that one! Invisibility for sure.”

Rob DiTursi: “Ana and I moved to Vermont from NYC in the fall of 2002, but Ana’s originally from Buenos Aires. She’s actually a professionally trained dancer who loves flamenco and a variety of other Latin dances. She started Ana’s Empanadas about 7 years ago when our second son was just a few months old. She was going stir crazy at home in Rutland, VT and started making empanadas as an outlet. Everyone loved them! She soon began selling them at the Farmers’ Market in downtown Rutland– before Farmers’ Markets were the cool place to be, like they are now.

At her first Market, Ana set up a little table with about 50 empanadas while carrying my eldest son on her back, and sold out. The next week she brought 100, and sold out. The next week even more and [she] continued to sell out. I started out by helping her on weekends, but then I got laid off from my job and we decided to dedicate ourselves to Ana’s Empanadas and go all in.

My favorite empanada (and Ana’s) is the ‘Santo’ – named for my Sicilian grandfather. My family is from Italy and Ana’s is from Argentina. Our ‘Santo’ empanada contains his recipe for Italian sausage that is simply perfect! It is made with locally raised pork, peppers, onions, and mozzarella cheese.

The homemade sauce we make to compliment our empanadas is a Chimichurri that came about during the first 6 months of being in business. No one in Vermont knew what an empanada was when Ana first started selling them at the Farmers’ Market and everyone kept asking where the sauce was. All of these people wanted a sauce for something they had never had before. (Americans love their sauces!) Ana came to me and said, ‘We need a sauce!’ so I created our own unique style of Chimichurri to accommodate our customers’ requests.

In Argentina they don’t put Chimichurri on empanadas. In fact, Chimichurri is traditionally used on steaks and it’s much thinner and more watery. So I got to work and came up with a thicker version that we’ve been using on our empanadas ever since–It was one of those proud, up-all-night-til-3 AM-and-finally-got-it-right cooking moments.”

SFM:  In case you’ve never had one, an empanada is a stuffed, hand-held pastry similar to a turnover, made by folding a circle of dough around a filling of spiced meat, vegetables, and/or cheese. The finished product forms a crescent with the edges crimped by hand, or sealed with the tines of a fork. Trust us when we tell you that Ana’s Empanadas are in a class all their own. Their mouthwatering empanadas are handmade and baked with real ingredients (Many of which are locally sourced!). Most of their dozen or so varieties use recipes from Ana’s native Argentina, and some have a unique American twist.

This is Ana’s Empanadas 3rd year at the Saratoga Farmers’ Market. You can find them on Saturdays, under the big, white Market Cafe’ Tent with the other local prepared food vendors. Be sure to stop by their table and pick up a few (or a dozen) empanadas and bottle of their Chimichurri sauce; a finger-licking blend of parsley, garlic, and spices that pairs beautifully  with their empanadas, and is also a fantastic addition to grilled meats and hearty dishes. You can thank us later! 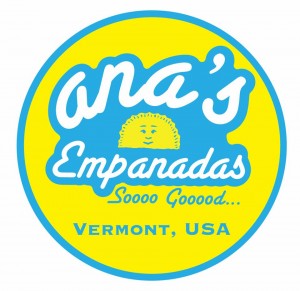