(SFM) Where were you born?

(SFM) What was the first album you bought?

(SFM) If you could only eat one meal for the rest of your life what would it be?

(SFM) What is your guilty pleasure (travel, food, recreation, etc.)?

(SFM) What is your favorite book?

(SFM) If you could go back in time, what year would you travel to?

(CC) “I always say I never want to go back in time, if I had the choice I would go forward in time.”

(CC) “All the bills would be paid, it would be sunny, partly cloudy, you know those big poofy clouds, 75-80 degrees, and not having anybody or anything needing anything from me.”

(SFM) If you could have dinner with anyone (past or present), who would it be?

(SFM) How do you recharge?

(CC) “Let’s see, the best way I recharge is usually taking a nice ride on my motorcycle.”

(SFM) If you could have a super power what would it be?

(CC) “My kids [and I] talk about this all the time, for me it would be the power to recuperate from injuries sort of like Wolverine you know? No matter what hits me I can be cured of it!”

Argyle Brewing Company (ABC) opened their doors on March 28th, 2014. Argyle, NY is a dry town so this “Farm to Glass” brewery is located at 1 Main St. Greenwich, NY. Its three partners, Chris, Matt, and Rich have a passion for beer and make an effort to support local farms. In fact, ABC operates under a New York Farm Brewery license, meaning the beer must be primarily composed of locally grown farm ingredients. Among the partners, they have 30 years of brewing experience between them. So you’re in store for some really great, skillfully crafted beer when you visit Argyle Brewing Company.

ABC crafts many tasty, truly New York State beers including their 100th batch, a limited edition Vanilla Porter. This special milestone was reached on July 28, 2015, so be sure to keep an eye out for the celebratory brew in the coming months!

Here’s a list of what’s always on tap at Argyle Brewing Company:

Blonde Ale: this brew was named for partner Matt’s daughter. It’s a smooth ale with mellow malty sweetness. For an excellent shandy, mix “Cute Little Blonde” with some fresh lemonade!

India Pale Ale: ABC’s IPA uses New York and Northwest hop varieties and has foundations of caramel malt, tobacco, and toasted bread crust. “Hop To It” has a lightly bitter and dry finish.

Altbier: “Alter Your Brew” has a spicy hop bitterness, a dash of roasted barley, and German red wheat malt – giving the brew a nice amber haze. This is a crowd favorite!

Oatmeal Stout: “Oat Me” has hints of dark chocolate and roasted coffee. With a light carbonation and rolled oats, “Oat Me” provides an enjoyable smooth mouth feel and is a great compliment to the bitter winters we know all too well here in upstate NY.

Red Ale: “Red Ale” is an Irish style Red that is smooth, roasty, and also provides a nice smooth mouth feel due to the flaked barley ingredient. *

In addition to delicious craft beer, ABC also has two awesome Stainless Steel Growlers you can purchase to transport your beer. With racing season in full swing here in Saratoga, these shatter-proof growlers are the perfect solution for bringing your ABC beer to the racetrack (for the 21+ of course). In addition to the 1-liter growler, a larger 2-liter option is now available! You can also find lots of other cool “beer gear” on ABC’s website, at argylebrewing.com.

Not only does ABC support local farms, they are also invested in the community! In April, ABC put on the “2nd ABC Run,” which helped raise $1,930 for the Breast Cancer Research Foundation. Argyle Brewing Company can be found every Saturday at the Saratoga Farmer’s Market. Stop by their tent on the North lawn, to sample what’s on tap, pick up a growler, and learn more about these delicious craft brews from Leah, who represents ABC at the Market. Better yet, take a ride over to their brewery in Greenwich, NY for a taste and a sneak peek of all of the “hop-pinings” in the tanks. Argyle Brewing Company is a brand new addition to the Saratoga Farmers’ Market family this summer season, and we are so happy to have them! Cheers! 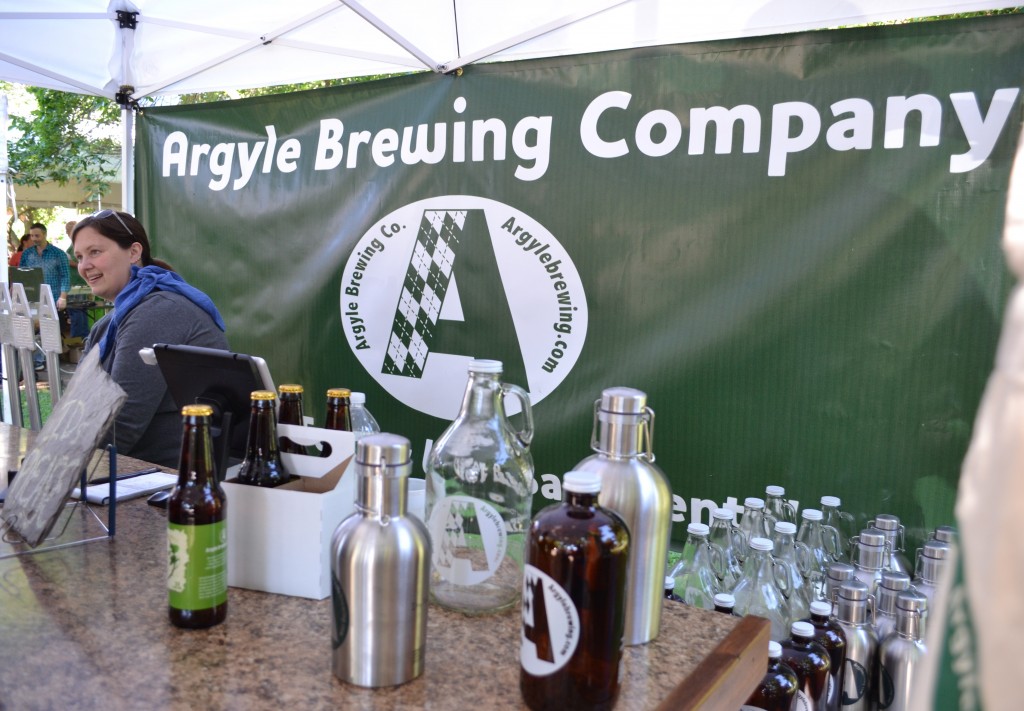