As part of our new “Meet Your Farmers & Makers” series, here is a Q & A with Rick Green (RG), owner of Ballston Lake Apiaries. To learn more about his delicious local honey and honey products, keep reading! 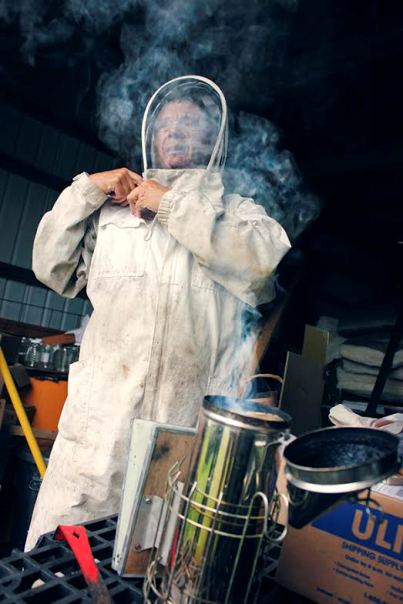 (SFM) Where were you born?
(RG) “Plattsburgh”

(SFM) What was the first album you bought?
(RG) “Three Jolly Coachman by the Kingston Trio”

(SFM) If you could only eat one meal for the rest of your life what would it be?
(RG) “Lobster”

(SFM) What is your favorite book?
(RG) “Cosmic Consciousness by Richard Bucke”

(SFM) If you could go back in time, what year would you travel to?
(RG) “The 60’s – for the hippy movement and anti-war rallies”

(SFM) What does your perfect day look like?
(RG) “Busy and productive.”

(SFM) If you could have dinner with anyone (past or present), who would it be?
(RG) “Einstein–to explain Relativity”

(SFM) If you could have a super power what would it be?
(RG) “To have a more perceptive writing ability”
More on Ballston Lake Apiaries:

What does raising chickens, Scottish Cattle, a masters in computer science, being an RN, an author, an educator and the buzz of bees all have in common? Rick Green! But what is it that Rick is most passionate about? The mystery and magic of bees!

For the past 40 years, Rick has given over 500 bee seminars and is the author of the book, “Apis Mellifera: A.K.A. Honeybee.” But where does his story begin? Rick’s family ran a restaurant in Rochester, New York. One winter a tree fell and customers were amazed at the bees alive, crawling on the snow, and the honey all over. The notion that honeybees actually lived during the winter, sparked his curiosity.

Rick began with only two hives, then expanded to four, and soon his operation grew to over 140 hives that house roughly 70,000 bees in each. That’s almost 10 million bees! In the year 2000, he loaded his hives onto a truck, re-located to Ballston Lake, NY and started Ballston Lake Apiaries.

The busy bees at Ballston Lake Apiaries currently produce over 5 tons of honey each year. Rick agrees that his honey harvest produces quite a lot of the sweet, golden nectar; but thanks to an increase in local demand and a loyal customer base, he doesn’t have to worry about having any leftovers.

Rick houses his bees in man-made “hives” which are wooden crates stacked on top of one another. Each hive contains rows of frames where the bees build their honeycombs. When it’s time to harvest, Rick calms the bees and persuades them to leave their hives by using a smoke blower fueled with a mixture of pine cones and alfalfa pellets. Once the bees are calmed and vacated, he then removes the frames from the hives and extracts the honey. As careful as Rick is, he estimates that he has accumulated over 500 stings in the 40 years he’s been be farming!

Bee communities operate with a hierarchal system that revolves around a single queen who can live up to 3-4 years. She is much larger than the rest of the bees and her job is to lay between 1,500 and 2,000 eggs every single day. In each hive there are a few hundred drones (male bees), whose only job is to mate with the queen.

Worker bees live for a total of six weeks, and they have a few more responsibilities than the others. The first three weeks of their lives are spent inside the hive — working as a guard, cleaning up the hive and helping in the nursery — and the last three weeks are spent collecting pollen. They communicate with one another through a pattern of dances to explain what food they have found while out and about, and to give directions on how far to go to find it.

And as Rick curiously discovered all those years ago, bees are one of the few insects to live in the winter. They store up an extraordinary amount of pollen to be able to make enough honey to feed on during those cold six months. Inside the hive the bees huddle in a ball around the queen, taking turns to stay warm on the inside of the cluster while also providing warmth for the others on the outer layer. The temperature inside the cozy winter huddle can reach up to 90 degrees.

Ballston Lake Apiaries can be found under the main pavilion every Wednesday and Saturday at the Saratoga Farmers’ Market. Rick offers a variety of products including: raw creamed honey, bee pollen, honey in various sized jars, beeswax candles, and Mead— an alcoholic beverage, popular in Medieval England, made from fermenting water and honey. For more information visit his booth at the Market, or contact Rick Green at (518)-384-2539 or email him at: gothoney@aol.com. 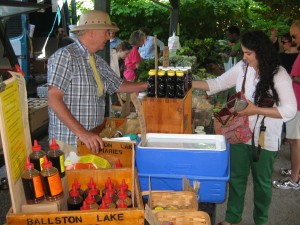