And, if all else fails, Farmers’ Market tokens make a perfect gift.

By Himanee Gupta-Carlson
The Jewish festival Hanukkah begins this year on December 24, which also is the final shopping day before Christmas. Throughout this season, the Saratoga Farmers’ Market has invited shoppers to to get creative by giving longstanding traditions an innovative twist.

Now, as the countdown to both Christmas and Hanukkah come, we turned to our local latke making expert, Kelley Hillis, owner of Puckers Gourmet Pickles, for her best tips on making these savory fried potato cakes.

Hanukkah celebrates the reclamation of the Holy Temple in Jerusalem from the Greeks in the second century before the Christian era. With only a single cruse of olive oil, the Jewish army led by Judah the Maccabee kept the temple’s menorah lit for eight days. In honor of that oil, it is customary to dine through the eight days of Hanukkah on fried foods. Over time, latkes, which are of Eastern European origin and are made in a manner similar to pancakes, became a central item for at least the first night’s meal.

But, says Hillis, a one-time winner of a latke cook-off at the temple she attends, it is not just oil and potatoes that make the savory cakes special. “It’s also the toppings. Play with them, experiment, get creative.”

Hillis favors sweet potatoes as the base for her cakes but also will use Yukon golds for their soft yellow hue. Regardless of what type is used, fine shredding is essential. “Also, be sure to press out the excess liquid,” she says. “Otherwise, they won’t fry properly.” Hillis likes to flavor her latkes with green onion, a touch of garlic or garlic salt, as well as a “touch of cayenne” for some heat.

Hillis serves matzoh ball soup, a special Hanukkah beer, and doughnuts, also Hanukkah fare. She sometimes tops her latkes before serving them, matching colors and flavors of both the cakes and the toppings but also advocates giving guests choices.

“Create a toppings bar,” she says. “It’s all about having fun and being creative.”

The Saratoga Farmers’ Market will be open Christmas Eve and New Year’s Eve from 9 a.m. to 1 p.m. at its usual location at the Lincoln Baths Building in the Saratoga Spa State Park. 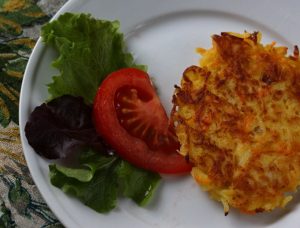 2. Fill a large skillet with about 1/2 inch oil. Place over medium heat until oil is almost smoking. (To test, drop a small bit of batter into the skillet; it should sizzle upon contact.)

3. Working in batches so as not to crowd skillet, carefully spoon about 2 tablespoons batter into oil for each latke. Lightly tamp down to flatten. Cook, turning once, until golden on each side, 2 to 3 minutes. Using a slotted spatula, transfer to a paper-towel-lined wire rack to drain. Repeat with remaining batter. Serve immediately with desired toppings.