Our honey vendor at the Saratoga Farmers’ Market, Rick Green of Ballston Lake Apiaries, has been interested in beekeeping since he was a child and is a wonderful resource about the science and the art of bees and beekeeping.

“My parents ran a well known watering hole, and one winter day some men came in with a tale of a tree that had fallen over and how the snow was covered with bees,” Rick remembers. “They brought fresh comb and shared it with everyone at the bar.”

The thought of bees alive in the middle of the winter intrigued Rick and he’s been learning about them ever since. “They’re one of the few insects that live through the winter, eating their stored honey,” Rick explained.

He started with a few hives and soon was producing more honey than he could sell. Through the Southern Adirondack Beekeepers Association, Rick met some of the founding members of the Saratoga Farmers’ Market. About fifteen years ago, when they needed a honey vendor at the Market, Rick was ready. Rick maintains about 140 hives, and also sells honey at several local shops.

No one should have trouble finding Rick at the Market; he’s tall enough to stand out, but the key identifier is his white beekeeper’s helmet with his name on the front, shaped like a pith helmet that Dr. Livingston might have worn. He uses everything the bees produce in his business.

The primary product of course is the honey, which he offers as raw in comb and cream form, or as extracted honey which has been heated slightly, but which will revert to the crystalline form in a few months. According to Rick, “One way to know if someone has adulterated honey with corn syrup is that the crystals will delay forming in a jar, if they form at all.” Most of his honey is clover with a mix of wildflower, but Rick also knows where some farmers plant buckwheat, and he moves a few hives there in August.

Rick also collects pollen from the hives, and saves the beeswax from the combs. The solid beeswax votive candles he makes will burn for fourteen hours. Some customers buy chunks of beeswax for making furniture polish or cosmetics. Face cream is also another popular product made from the beeswax. A few years ago he introduced two concentrates (honey-balsamic and honey-teriyaki) for salad dressings, marinades and for stir frying.

In addition to providing us with delectable honey and other products, bees are important for pollinating crops. “The Pilgrims imported them from Europe and now they account for over $16 billion worth of pollinated foods,” Rick said. For instance, some of Rick’s bees will soon be at work pollinating apple orchards.

Raising bees used to be a fairly risk-free operation, and few hives died over the winter. Once he would lose only two or three percent of his hives each winter, now ten times that many can perish. Rick feels that the bee is analogous to the canary in the coal mine as an indicator of the health of our environment. Bees are affected by pesticides used on crops, are attacked by mites that can infest the hive, and infected by bacteria. 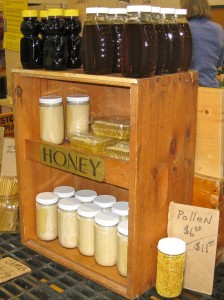 Customers will find Rick at the last three weeks of the Saratoga Winter Farmers’ Market at the Division Street School, and at the Summer Markets at High Rock Park, starting Wednesday May 1 and Saturday May 4. To learn more about Rick and his bees, attend one of his library lectures, or pick up a copy of his book, Apis mellifera A.K.A. Honey Bee, published in 2002 by Branden Books, either from Rick or on line. He visits local schools, from kindergarten through high school, giving talks about honey bees, and of course enjoys answering questions at the Farmers’ Market

A new product he sells is also easy to make and is popular all over the world. “You combine equal weights of honey, and roasted sesame and flax seeds. Form it into a sheet on a plastic cutting board and cut into any shape you like.” It is delicious, as is the following recipe for gluten-free honey-buckwheat cake.

(Adapted from Great Italian Desserts by Nick Malgieri. All ingredients marked * are available now at the Saratoga Farmers’ Market)

Butter a cake pan, 9 inches in diameter and 2 inches deep; line the bottom with parchment or wax paper.

With an electric mixer, beat the olive oil and honey together in a bowl and put in the freezer for about 15 minutes or until thickened.

Remove from the freezer, add half the honey, and beat until mixture becomes somewhat light and fluffy.

Add egg yolks one at a time, beating until completely blended.

Stir in vanilla and ground almonds.

Using clean beaters and a clean bowl, whip the egg whites until they form soft peaks. Add the remaining honey and beat until the peaks become glossy.

In another bowl mix the buckwheat flours and salt.

Gently fold in about a fourth of the egg white mixture into the egg-honey-oil mixture, then a third of the flour mixture. Continue alternating until all the ingredients have been added.

Pour the mixture into the cake pan, and bake for about half an hour, until a skewer inserted into the middle of the cake comes out clean.

Remove from the oven; rest for about ten minutes, then invert on a rack until cool.

Cut the cake into two layer with a sharp serrated knife. Spread the preserves on one layer, and top with the second layer. Sprinkle the top with confectioners’ sugar.

Cut into wedges, and serve each slice with a dollop of whipped cream on the side.