Once the temperature heats up, our slow cookers tend to become a little neglected—after all, no one

wants heavy soups and stews when it’s 90 degrees outside! Crockpots are an obvious cold-weather

essential, but I’m here to tell you it’s time to dust yours off and take this appliance for a spin during the

warmer months too. If you’re accustomed to putting your slow cooker away from March to September,

you may want to reconsider; using this handy appliance during the summer will not only spare you from

turning the oven on and turning your kitchen into a sauna, but it will allow your dinner to slowly cook

itself all day while you head off to work, drive summer camp carpool, or hopefully play outside in the

warm, sunny weather. The best part is dinner’s all ready to go when you finally decide it’s time to eat!

Using a slow cooker in the summer is ideal for developing awesome flavors, feeding a crowd, and frankly

won’t leave you stranded over the stove for hours. Forget traditional slow cooked stews and cozy

casseroles, and try your hand at Crockpot fajitas, corn on the cob, pulled pork, or vegetarian lasagna

instead. Better yet how about a slow cooked summer dessert like fruit cobbler or s’mores bars! Armed

with a few summer-friendly slow cooker recipes, you can enjoy convenient slow cooked family meals to

get you through the second half of summer. Thanks to the Crockpot, cooking meals this summer just got

Here are four great reasons to dust off your slow cooker this summer:

Fahrenheit. Because of this, leaner and less-expensive, fibrous cuts of meat become more tender — and

keeps the food at the right temperature, and you can serve it straight from the pot. Just plug it in, and

Cooking with a slow cooker, saves energy without compromising taste. According to the Southern

Maryland Electric Cooperative, using a slow cooker at 200 degrees for 7 hours costs about 9 cents, while

using an electric oven at 350 degrees for 1 hour costs about 25 cents.

You Name It, It Cooks It.

Slow cookers don’t just cook up entrees; you can also make appetizers, side dishes, and even desserts

with surprising success. There are a variety of recipes in print and online to add to your summer slow

cooker recipe collection; including this favorite for Cajun Pork Sliders… 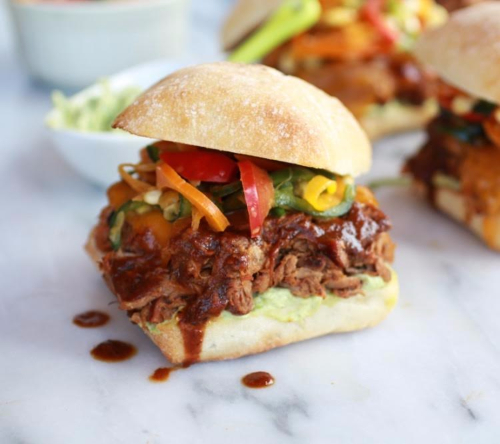 in a Slow Cooker.

salt and pepper. Heat a large skillet over medium-high heat and add oil. Rub the pork all over with the

seasonings. Once hot, add pork and sear on all sides until golden brown (about 2 minutes per side).

After 8 hours, remove the pork from the Slow Cooker and set aside to cool slightly. Skim off any excess

fat from the cooking liquid, then strain into a large skillet and bring to a boil. Cook until reduced by one-

Shred the pork with forks and toss with the newly reduced sauce.

mustard to make a crème. Stir until combined and set aside.

Slice and toast the slider rolls. Spread a little of the avocado crème on the bottom of each roll. Add the

pork, top with pepper & corn slaw, and the top of the roll.