It’s a Saturday morning in mid-October at the Saratoga Farmers’ Market. It’s cold this morning, gray and drizzly. Rain patters on the roof of the High Rock Park pavilion, which houses the market, and vendors are sporting wool caps, mittens, and heavy flannel and fleece jackets. Hot cider has replaced iced tea at Something’s Brewing, and customers are talking not about salads and grilled meats but about soups and grilled cheese sandwiches.

Clearly, there’s been a change of seasons. With it comes the market’s annual transition: The final outdoor market for 2016 is 9 a.m. to 1 p.m. tomorrow. On Saturday, Nov. 5, the indoor market opens at 9 a.m. at the Lincoln Baths in the Saratoga Spa State Park.

“Going indoors brings us close together,” said Armin Hrelja of Euro Delicacies. “You can’t miss any one of us because we’re all bunched up together.”

The Saratoga Farmers’ Market, which started in 1978, held its first winter market in 2009 at the Division Street Elementary School. The market shifted its winter location to the Lincoln Baths in 2013. Winter plans include a Taste of the Market, holiday bazaar, weekly kids activities and other events. Most importantly, however, said Market Director Julia Howard, is the fact that the winter location provides access to locally raised produce, meats, dairy and other products year round. All of the market’s vendors hail from farms or businesses in Saratoga, Washington, Schenectady, and Rensselaer counties, and nearly all items sold at the market are produced in these areas.

Like agriculture, the market’s winter location is rooted in Saratoga history. The area that now houses the state park was established in 1911 as a state reserve to preserve Saratoga’s natural springs for future use. The Lincoln Baths building opened in 1930 to make healing baths in the waters available to the public. While the building stopped being used for this purpose in 2004, its ties to the area’s natural environment and healing atmosphere linger.

Mary Pratt of Elihu Farm, a longtime Washington County farmer, appreciates that connection. “I like being in such a historic building,” she said. “For farmers who continue to do traditional practices, it’s a natural connection.”

Janet Lampman, who sells for Lewis Waite Farms, agrees. While she admits that she’ll miss the experience of being outdoors, she says, “the indoor camaraderie is wonderful.”

“We’re grateful to have such a space.” 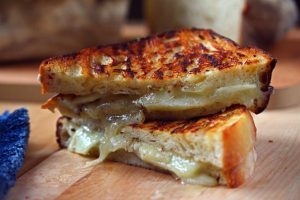 1. Heat a cast iron skillet or grill pan to medium.

2. Stir together the mayonnaise and butter in a small bowl. Spread one side of each piece of bread with this mixture. On the other side of one slice, spread mustard, then one slice of cheese, apples, then another slice of cheese. Top with the second buttered slice.

3. Fry on both sides until the cheese is melted and the bread is toasted and golden, 2 to 4 minutes a side.