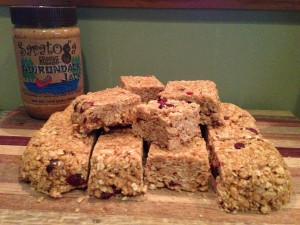 At the Saratoga Peanut Butter Company table at the market in High Rock Park last Saturday, there were lots of families gathered around, sampling different flavors. It is a fun spot for anyone planning new menu items for hearty back-to-school breakfasts or lunchbox options.

As the company’s slogan aptly says, “We started at nuts. And then went crazy!” Adults and kids alike had big smiles as they tasted the different kinds of nut butters, served up on small pretzel sticks.

For purists, “Plain Jane” peanut butter and “Almighty” almond butter are available, made just with nuts and a small amount of salt. For those preferring organic foods, Saratoga Peanut Butter Co. sells organic peanut and almond butters, in addition to conventional varieties.

The company makes its nut butters in small batches, and does not add palm oil, trans fat, preservatives, or any added sugars. All products are gluten- and GMO-free.

From its origins in 2005, owner Jessica Arceri has grown her company significantly, so that it now includes distribution not only at local farmers’ markets and festivals but also in large retail outlets throughout the Northeast.

The nut butters are delicious spread on bread or slices of fruit, and can also be used to flavor smoothies, entrée dishes, and in a variety of baking treats, such as this easy back-to-school granola bar recipe.

Line an 9 by 12-inch baking dish with foil or parchment paper leaving a 2-inch overhang.

In a large mixing bowl, toss together oats and cereal, set aside.

Cover with plastic wrap and chill in refrigerator 30 minutes.

Lift bars from dish using foil overhang and cut into squares. Store in an airtight container.

Who has missed Mister Edge? 🙋 Catch him at our