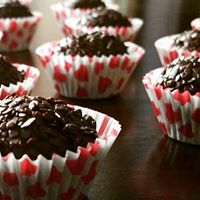 When you visit the Saratoga Farmers’ Market this Saturday, we invite you to start your trip with a stop at Something’s Brewing and have a hot drink: coffee, tea, cider, or perhaps chocolate. Then, make a stop at the Chocolate Spoon for a cookie flavored perhaps with black pepper, ginger, cayenne, or chocolate. Amid the shopping for your week’s produce, meats, and dairy products, check out some of the delectable, dark-chocolate treats prepared by Brazilian Bon-Bon. And, of course, don’t forget that Battenkill Valley Creamery at the back end of the market has chocolate milk among its many products.

These offerings of chocolate at our fresh and local market tap into a rich and amazing cultural past. My colleague at Empire State College, Dr. Dana Gliserman-Kopans, offers a few insights, gleaned from her studies of this sweet, soothing ingredient:

Monastic memories: Chocolate consumption has origins in ancient Mexico, and was primarily a substance comprised of cocoa, sugar, cinnamon, and vanilla consumed in liquid form. It was diluted with hot water, milk and sometimes wine. It was taken warm. Often as it migrated from Mexico to Spain in the early 17th century, it became a beverage that fasting monks could use as a nutritional substitute for food.

Courtly cups: In Spain, the king was regarded as “the most Catholic majesty.” That position, reports Gliserman-Kopans, allowed chocolate to gain favor in courts and ultimately made drinking chocolate a stylish endeavor and a symbol of status. The practice spread across Europe after Anna of Austria, who had grown up in Spain, married Louis XIII of France, and brought her favorite beverage with her.

Bordello beverage: Chocolate generally was a late-morning drink, associated with luxury, languor, and love. It often was served in bordellos, and gained a following for reputed aphrodisiac qualities.

Children’s cocoa: All of these adult connotations of chocolate changed around the turn of the 19th century when technological processes for producing chocolate changed, creating powdered cocoa. This lightened the beverage and over time made it accessible to children who were generally discouraged from taking in other morning beverages as coffee and tea, and of course evening spirits. 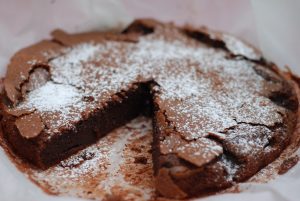 As of the early 21st century, hot cocoa, in Gliserman-Kopans view, is most popularly enjoyed by children although chocolate is appreciated by virtually everyone, regardless of age, gender, race, ethnicity or social status. The chocolate at the Saratoga Farmers’ Market embraces that past and present. As you consume it, embrace its past and enjoy its varied forms that in which we can partake in the present.

Recipe: The following link offers a new twist on the late afternoon pick-up, replacing hot chocolate, tea, or coffee with brewed cacao. It suggests preparing the beverage with milk or water, adding a sweetener such as honey, and adding the ground cacao beans to your compost, enriching our soil.