The other night I came home at sunset to find a kitchen turned upside down. With about ten minutes, I needed to prepare vegetables for dinner.

I turned to three key words: color, impulse, and quick.

In the garden, I picked a handful of the last of our deep green komatsuna (one of the many varieties of Asian greens that are especially sweet after the first frosts of fall), and on an impulse, plucked a couple of purple kale leaves, as well.

Inside, as I cleared space on the counters to wash and prep these greens, my eyes fell on a red bell pepper that I had purchased at the previous day’s Saratoga Farmers’ Market from the Owl Wood Farm. Quickly, I sliced off one of its walls and diced it up. 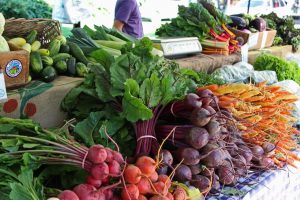 I opened the refrigerator to get out a bottle of Bragg’s Amino Acids (a low-sodium substitute for soy sauce) and spotted an ear of sweet corn, leftover from an earlier dinner, wrapped protectively in Saran wrap. My eyes also fell on a bag of carrots that I had purchased from Denison. I pulled one out.

On the chopping board, a rainbow of vegetable color lit up: green from the komatsuna, red from the bell pepper, slivers of orange from the carrot, nuggets of yellow from the corn, and finally a flourish of purple from the kale.

I got out a wok that I often use for cooking vegetables, though any deep skillet or saucepan will do. I turned on the heat and put in a teaspoon of olive oil, a dash of sesame oil, a squirt of the Bragg’s, and then all the vegetables, all at once. With two wooden spoons, I tossed them to coat them with the oil and the amino acids, and gave them about two minutes to cook.

I turned off the heat, and brought the wok to the table with a hot pad. The vegetables were crisp in their freshness and the quick preparation allowed them to retain their distinctive flavors while complementing each other.

The best part about this dish was its sheer spontaneity. No plan, no rhyme, no reason. All I had to do was think color and act quickly on my impulses. 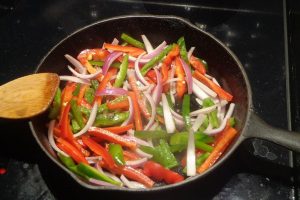 Recipe
6-8 leaves of a leafy green such as pac choi, cabbage, collard or kale
2-4 leaves of a purplish green such as purple cabbage or kale
¼ red bell pepper, diced.
½ carrot, slivered
½ ear of corn (or perhaps a few strands of spaghetti squash)
oil and Bragg’s amino acids (or Balsamic vinegar or soy sauce)

1. Wash and dice leafy vegetables.
2. Heat oil and add amino acids in a cooking pan.
3. Toss vegetables into oil, and toss for 2 minutes with two wooden spoons.
4. Remove from heat and serve.