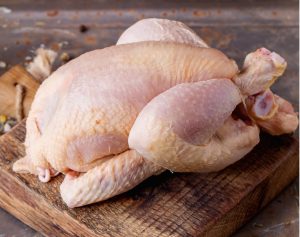 What’s more American than apple pie? Along the Eastern Seaboard, the answer could very well be clam chowder, specifically New England clam chowder. Despite the variations – Manhattan, Rhode Island – the classic chowder is New England.
Chowder originated in fishing villages along the coasts of France and Britain. Fishermen returning from their trips would celebrate with a large chaudiere – or cauldron – of their catch. The name of the mix of fish, aromatics, and vegetables cooked in the chaudiere came to be known over time as chowder. Because clams and oysters were plentiful on America’s northeast coast and a favorite with Native Americans, they came to be adopted by the Europeans who settled in the Americas, too. From these coastal beginnings came New England clam chowder.
Not all of us, however, are from the coast. Some of us grew up landlocked surrounded by cornfields and forested mountains. For us, too, chowder has become a favorite dish – one that features the farm-raised meats of our region: chicken and pork.
Making a successful chowder starts with a good base. I begin with a whole chicken from the Saratoga Farmers’ Market. That goes into a Dutch oven with onion, celeriac, a bay leaf and plenty of water. I cook the chicken until it’s done, pull off the meat, and toss the bones back into the pot. I set the meat aside and continue to let the bones simmer until I have an awesome rich stock.
Pork is a traditional ingredient whether as sliced bacon, slab bacon or salt pork. But it’s not the pork as much as the method that’s important. In an empty pot, cook the bacon slowly at a low temperature and don’t let it burn. While it cooks, scrape up the browned pieces from the bottom of the pot. Those brown scrapings matter: they hold the code to a great chowder – the flavor. Then come vegetables: The standard is cor

n, which makes chowder a perfect dish for the corn you might have frozen if you stocked up on the fresh corn available last summer at the farmers’ market. Other vegetables might be diced potatoes or carrots, or perhaps a sprinkle of pea shoots just before serving.
Add the shredded chicken and stir in some heavy cream at the end for a creamy consistency. And there you have it, a rich, chunky, serious cup of chowder.
Visit the Saratoga Farmers’ Market 9 a.m.-1 p.m. Saturdays at the Lincoln Baths Building in Saratoga Spa State Park; follow us on Twitter, Facebook, and Instagram; and contact friends@saratogafarmersmarket.org for volunteer opportunities.