Market Wine and Port Pair Well with Many Flavors

When most people think of New York wine, it’s the vineyards in Long Island or the Finger Lakes that jump to mind. But, for the past nine years, John Cameron and his partner, Fran Morrison, have been shaking it up with their own take on Empire State grapes. Since starting at the Troy Farmers’ Markets almost a decade ago, Colebrook Wine has now expanded to ten different markets, yet still maintains a steadfast presence at the Saratoga Farmers’ Market every Wednesday and Saturday. 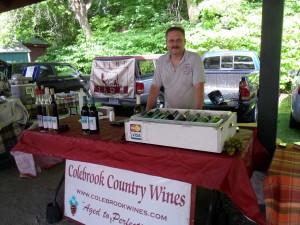 Despite its growth, Colebrook Wine remains a two-person operation, true to its humble beginnings. “Wine-making started as hobby for us,” recalls John, adding that he and Fran began their venture into vino with a batch of dandelion wine. “From there, we decided we’d give it a try as a business,” he explains. Nine years later, it’s still up to Fran and John to get the wine made and distributed. The duo does everything from obtaining grapes from around the state, to fermenting them in their small winery in Wilton, to bottling and labeling the wine, to selling it at the markets.

By “eliminating the middle man,” as John calls it, he’s been able to keep the wine priced reasonably, from $13 to $15 a bottle. He’s also maintained the flexibility to explore all sorts of unique flavors—an area in which Colebrook Wines seems to have found its niche. From black raspberry red to cran-apple, strawberry blush to green apple Riesling, and even peach and blueberry wines, Colebrook has an array of flavors that won’t often be found in an ordinary liquor store. There are also flavored ports in the repertoire, including white chocolate, toasted caramel, and orange chocolate.

According to John, it was the desire to expand beyond the basic reds and whites that drove him and Fran to start experimenting with different flavors. “We wanted to diversify,” he explains, “Some people like sweet wine, some people dry, but I like to have something for every taste bud.”

For those wanting to pair a Colebrook wine with another market product, the market has a wide variety of meat and poultry items, many types of cheese, crackers, as well as sweet baked goods to pair with port.

Here’s a recipe for a quinoa pilaf, using market scallions and onions, that pairs nicely with Colebrook’s Black Raspberry Merlot. If you don’t have quinoa, substitute rice or couscous.

½ teaspoon salt, or to taste

A sprinkle of black pepper

Bring quinoa to a boil with 2 cups of water, then let simmer until most moisture is absorbed. Meanwhile, heat oil in a skillet while cooking the white section of the scallions. Add the quinoa and stir in the cranberries, salt, and pepper; add the onion last, and simmer until dry. Finally, stir in the scallion greens if desired, and then add almonds. Fluff the quinoa and let it stand; serve warm.