“Flowers are natural beauty from the earth that everyone can appreciate.”

This sentiment, voiced by Ryan Holub of Scotch Ridge Berry Farm, captures a sense of how flowers are growing into a business of beauty, inspiration, and love for the longtime family farm business and Saratoga Farmers’ Market vendor. 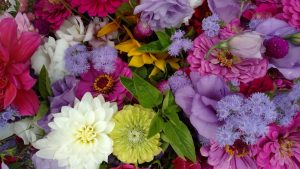 Scotch Ridge is known for its baskets of berries and cherry tomatoes in the spring and summer, as well as its Christmas trees and holiday greens in the winter. Now, flowers are becoming a prominent part of the family business, as well.

The reason for this is, in part, Ryan Holub’s passion for flowers, particularly those that thrive in our growing region.

“I start just about everything from seed,” Holub said, adding that he likes “to focus on unique heirloom varieties that you wouldn’t see at other farms or florists.”

The growing of flowers begins soon after the fall season ends, as Holub starts thinking about which varieties to grow in the spring. He considers not only the flowers themselves but also grasses, fillers and secondary blooms to create cut flower bouquets. He also thinks in terms of growing seasons and the blooming cycles of different varieties.

“Some flowers like sunflowers bloom only once so you have to plant them every week,” Holub said, “while flowers like dahlias and zinnias produce more blossoms each time they are cut.”

Lisianthus is a favorite of Holub’s and a prominent flower in his arrangements. He grows it under a high tunnel, and uses no pesticides or sprays on it or any of his other flowers. He describes watering as one of the biggest challenge because “you never know what the elements will bring.”

Scotch Ridge will sell its flowers at the Wednesday and Saturday markets until the first frost occurs. The flowers also are available at Healthy Living Market, and for weddings and other special events as the growing season allows.

Holub is collecting seeds for next year and dreaming of adding even more joy to the lives of others.

“Working with flowers allows me to be creative,” he says. “Every year we take flowers to the next level.”

The Saratoga Farmers’ Market is at High Rock Park 3-6 p.m. Wednesdays and 9 a.m. to 1 p.m. Saturdays through October 29. 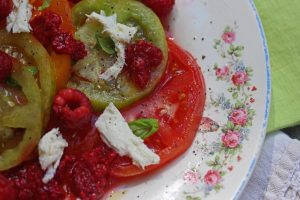 1. Arrange the tomato slices on a plate. Season with pepper and olive oil.
2. Douse the raspberries with a drizzle of raspberry vinegar and crush with a fork. Top the tomatoes with the torn mozzarella, drizzle over the raspberry dressing and scatter with basil to serve.

Note: White wine vinegar can substituted for the Raspberry vinegar.