Did you know that …

Eating locally grown food is not only good for you. It’s good for the economy, too.

For instance, a 2011 study by Skidmore College students found that even though Saratoga Springs itself is urban, nearly 650 small farms and 75,550 acres of agricultural land surround the city. This makes local farming a viable source of food for area residents and the farmers an important contributor to the overall economy. The connection between these two are market shoppers who buy the food that farmers grow, spending on one data-gathering day in 2011, an average of $30 per capita at the market.

Other stats from the Farmers Market Coalition highlight the value of buying local on a national scale. The coalition reports that:

• Farmers who are able to sell their products in local outlets generate 13 full-time jobs for each $1 million of revenue that such sales bring in. Non-local sales, by contrast, generate just three new jobs.

For more reasons to shop local, check out Market Director Julia Howard’s article in this week’s edition of Saratoga Today. And if you’d really like to get creative with a local dish, try this recipe for Goat Cheese Fondue. After you’ve picked up the cheeses, garlic, wine and herbs from the vendors who offer these products at the market, take a look at potential dippers:

• Cherry tomatoes from the hydroponic plants grown by Shushan Farms;

• And finally apples from Malta Ridge and Saratoga Apple. 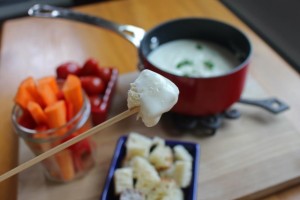 1. Finely chop parsley, basil, and garlic. Place in bowl and set aside.

2. Bring wine to boil in fondue pot or medium saucepan. Simmer 5 minutes or until reduced by

goat cheese mixture and cook 3 minutes or until thickened, whisking constantly. Whisk in

Gruyere cheese and cook 1 to 2 minutes or until smooth and all cheese has melted. Stir in