Tucked into a corner of the Saturday Saratoga Farmers’ Market is a truck, a set of tables bearing tomatoes in multiple shapes, sizes, and colors, and a grinning wood donkey, clad in overalls. The donkey, named Paco, welcomes visitors to Old World Farm and its of growing good food to nourish a community.

“We specialize in heirlooms,” owner Paul Moyer said, “Partly because we love the flavors, and partly because it’s a part of our heritage. It’s a way of helping people also connect with their pasts, and to gain an understanding of the value of saving these varieties for their flavor and beauty.”

An heirloom vegetable is one that is grown from seeds that are open-pollinated and saved from one season to the next, often for generations. Heirlooms differ from hybrids that result from crossing selected varieties. Despite the bountiful harvests that hybrid seeds produce, a growing number of farmers and customers are seeking out heirloom varieties. Moyer, a former chef, is among them. 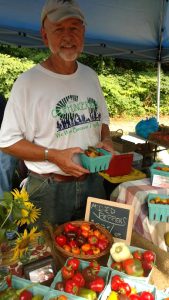 Moyer began growing vegetables and herbs at his home while teaching culinary arts. His garden grew and he decided in 2009 to expand his passion for growing food into a small farm. He acquired a former horse farm in Stillwater in 2010, and works with Rich Tooker, Sandy Perryman, and a handful of others to raise produce on 1-1/2 to 2 acres. Their crops include 33-plus varieties of heirloom tomatoes, broccoli, garlic, cucumbers, eggplants, brussels sprouts, greens, and ground cherries. Into the mix also are chickens, eggs, herbs, and flowers. All of the work is done with minimal equipment, no pesticides, and an attentiveness to nature.

“We plant deep and always uneven,” Tooker said. “Nature doesn’t like even numbers.” We use hay to mulch and to help wick off excess water. We save all of our seeds.”

Besides being a carpenter and third-generation farmer, Tooker created Old World Farm’s donkey sign. The idea came as a result of a friendship between Paco the donkey and a mule at a neighboring farm. “They seemed to represent what we were trying to create,” Moyer said. “A community that is healthy from eating good food.”

Old World Farm sells at the farmers market on Saturdays from July through September. Moyer can be reached at chefmoyer@gmail.com, or 518-428-1244. 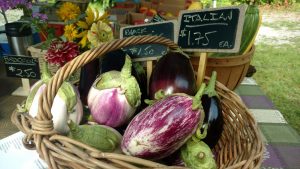 The Saratoga Farmers’ Market is open through October from 3-6 p.m. Wednesdays and 9 a.m to 1 p.m. Saturdays at High Rock Park.

1. Place cut tomatoes in a roasting pan.
2. Top with garlic, basil, salt and pepper.
3. Pour olive oil over top and toss until combined.
4. Roast at 400 degrees Fahrenheit for 1 hour.
5. Remove excess liquid and save for soup stock or tomato sauce.
6. Roast for an additional 30 minutes.

Enjoy over pasta, crunchy bread, or any other way that you would use tomatoes.