Carl Deppe, owner of Row-to-Hoe, is the main man behind his farm’s steadfast selection of green beans. Having grown up in Brooklyn, Carl moved upstate a “long time ago”—and as for why, that story is just as long, he says. He left a career in marketing to become a master gardener in Washington County. “I got my start in strawberries,” Carl recalls, “But vegetables just worked out better.” 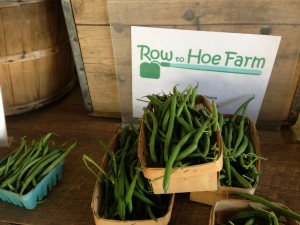 Now, 20 years later, about two-and-a-half of Carl’s 12 acres in Hudson Falls are used for vegetables. From the slender haricots verts, or green beans of a “French variety,” to “good old regular green beans,” it’s all up to Carl to get his produce from farm to table.

Although his wife, Diana, a newspaper editor, occasionally helps out, “Mostly it’s just me,” remarks Carl. That’s why his raw garlic remains a rich, unwashed brown. “I haven’t gotten around to washing it yet, but next week it will be washed,” he says with a chuckle.

For a man who does most of his farming himself, it makes sense that his agricultural skills are mostly self-taught, too. Although he had some experience on a dairy farm, he honed his own gardening skills when he moved upstate.

At this time of year, the Row-to-Hoe table in the market’s center pavilion has boxes of beans, new potatoes, garlic, peppers, eggplant, and cucumbers.

Carl says he very much enjoys living in Hudson Falls and working full-time as a farmer, but his past life appears to play a role, too. “A big part of this job is marketing,” says Carl, “It doesn’t do any good to grow beautiful vegetables if you can’t sell them.”

This colorful and flavorful recipe features the plentiful beans and garlic from Row-to-Hoe.

Using a large skillet, cover green beans half-way with water and add salt. Boil until almost all of the water has cooked away and the beans are crisp according to taste. Decrease the heat to medium-high, and add the oil and garlic.

Allow the garlic to sizzle, and then toss in the tomatoes. Finish with basil, and then season with salt and pepper. Serve immediately.