The bold orange hue of pumpkins makes fall festive in Saratoga. But as the vivid glow of fall gives way to the wetness of winter, a question arises: What to do with the bounty of pumpkins, gourds, and other winter squashes?

The best answer, of course, is to eat them, especially at Thanksgiving. In doing so, you’re continuing a history of feasting that might stretch back thousands of years.

Nate Barksdale, writes in “The History of Pumpkin Pie” that pumpkins likely were a part of the first Thanksgiving feast. The orange gourds were first grown in the Americas around 5500 B.C.E. When European explorers traversed the New World, pumpkins were among the foods brought back to Europe. By the time the Pilgrims left England, pumpkins were well known throughout the Atlantic.

Pumpkin is an acquired taste — both then and now. Europeans made it palatable through pies. These pies involved steaming or roasting a pumpkin to cook and soften the flesh, scooping it out, and combining it with eggs, cream, and spices. This concoction was then poured into a pie crust and baked.

Such pies have deep roots in New England Thanksgivings, with one town, Colchester, in Connecticut postponing its celebration of the holiday in 1705 because of a lack of availability of molasses to make pumpkin pie.

These days, pumpkin pie often is made with canned pumpkin, as a result of the Libby’s company introduction of the product in 1929.

While the introduction of canned pumpkin has given pie making a boost in the convenience realm, we at the Saratoga Farmers’ Market stick to the idea of appreciating pumpkins fresh. Like other winter squashes, pumpkin can be roasted, slow cooked or stewed. While perfect in pie, it also can be a side dish stuffed in the style of the accompanying recipe. Give it a try.

As for all of those spent jack o’ lanterns that might be lingering in garages or on doorsteps, pumpkins and other winter squashes compost beautifully to create new soil. The Friends of the Market would be delighted to accept lingering remains of jack o’ lanterns and any other squashes in its compost bucket at the Saratoga Farmers’ Market each Saturday.

For more on pumpkins, visit www.history.com/news/hungry-history/the-history-of-pumpkin-pie.

The Saratoga Farmers’ Market is open 9 a.m. to 1 p.m. Saturdays at the Lincoln Baths Building at the Saratoga Spa State Park. 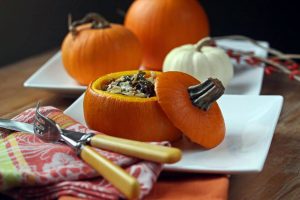 While pie is the go-to preparation for pumpkins, we invite you to consider this recipe, adapted from Kim Serverson of the New York Times. This recipe features market pumpkins and vegetables, Murray Hollow bread, and Longview Farm’s High Rock Cheese in place of the Gruyere below. Other small winter squashes such as acorn or sweet dumpling also can be used in place of the pumpkin.

1. Heat the oven to 350 degrees. Wash the pumpkins and remove the tops as if for a Jack-o’-lantern.

2. Scoop out the seeds and stringy insides with a spoon, leaving the flesh intact. Rinse out the cavity.

3. Melt butter in a saute pan over medium heat, then add the scallions and cook for a few minutes. Add the garlic and saute for another minute or so until fragrant. Add the swiss chard and cook until it just wilts, about 3 or 4 minutes.

4. Remove from heat, stir in the lemon juice and transfer to a bowl. Add the bread crumbs, cheese, pine nuts, and nutmeg. Mix well, and then stir in cream.

5. Divide the filling into the pumpkins and replace the tops. Rub a baking dish with olive oil and arrange the filled pumpkins in the dish.

6. Bake for 1 hour, watching to make sure the tops don’t brown too much. Test the pumpkin by piercing with a fork. If the skin doesn’t pierce easily, remove the tops and bake for another 15 to 20 minutes. Replace the tops and serve hot.