In 1966 Alan Brown, a mere 23 years old at the time, purchased the farm in the town of Jackson that is now Lewis Waite Farm, one of the Saratoga Farmers’ Market’s main meat providers. At that time, the farm was deserted, and the historic 19th century house was in need of extensive repair and was without power or running water, Brown recalls. “We started with some pigs and beef cattle and plugged along slowly, clearing land, improving, getting the brush out of fields and all of that,” he remembers, adding that the farm grew as the years went on. 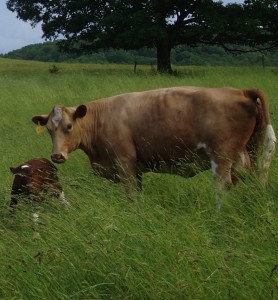 Fast-forward to 2013, and that original plot of land is now included in the 450 acres that makes up the present-day Lewis Waite Farm, which is still run by Alan and his wife, Nancy. The pair are “big believers in keeping things as close to nature as possible,” and the farm prides itself on its beef and pork, raised using organic methods on certified organic land. They also lease 140 acres for hay, which are also NOFA-NY certified organic.

The “tranquil lives” of the cattle—which graze in open fields on a rotational system, which aids native grass growth and contributes to soil health—result in meat that is not only tender and tasty, but also healthy. “Our cows never get any grain, ever,” Alan and Nancy emphasize, and it is this more natural food that creates meat that is lean and nutrient-rich. The beef is also dry-aged for two weeks, which contributes to concentrating the great flavor.

Lewis Waite’s pork is of similar quality. The pigs are allowed to frolic in the mud, bathe in the sun, and root in open pastures. Fed local corn and soybeans, as well as kelp, alfalfa, diatomaceous earth and garden leftovers, Lewis Waite’s pork is free of, hormones, animal byproducts, antibiotics and preservatives. 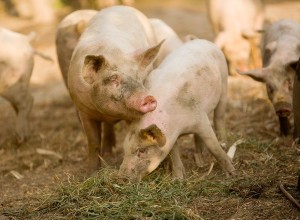 With such high-quality meat, it is no surprise that Lewis Waite’s ground beef, steaks and pork chops and shoulder—the best-selling products at the farm’s stand—are so popular at the Saratoga Farmer’s Market.

To prepare your own piece of Lewis Waite meat, make sure to cook it at a lower temperature than you would a grain-fed product, and check it regularly to avoid over-cooking.

This article was written by Katie Doyle, a summer intern at Saratoga Farmers’ Market. A resident of Saratoga Springs, Katie will be a senior in the fall at Boston University, where she is majoring in English and journalism.

Grass-Fed Steak on an Outdoor Grill

Recipe adapted from Farmer and the Grill:  A Guide to Grilling, Barbecuing and Spit-Roasting Grassfed Meat…and for saving the planet, one bite at a time, by Shannon Hayes, Left To Write Press.  Submitted by Lewis Waite Farm with permission of the author.

Combine the salt, pepper and garlic in a small bowl.  Rub the mixture into both sides of the steak, then allow the meat to come to room temperature while you prepare the grill.

Start the grill and warm it until it is hot.  If you are using a gas grill, turn off all but one of the burners once it has come up to temperature.  If you are using charcoal, be sure all the coals have been raked to one side.  Use the hand test: the grate will be hot enough when you can hold your palm 3-4 inches above the metal for no more than three seconds.

Sear the steaks for 2-3 minutes on each side directly over the flame, with the lid down.  Then, move the steaks to the part of grill that is not lit.  Set the lid in place and allow the steaks to cook, without flipping them, until they reach 120-135 degrees on a meat thermometer (depending on your preference for doneness), about 10-20 minutes, depending on the size of the steak.

Remove the steaks to a platter and allow them to rest a few minutes before serving.

*Grass-fed steak can be purchased at Saratoga Farmers’ Market.