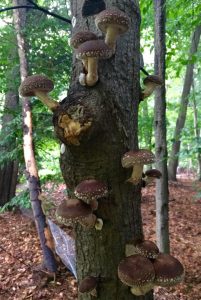 My husband and I are slowly creating a mushroom garden. We filled two oak logs with oyster mushroom spawn in 2015. After harvesting a handful of mushrooms that fall, we added about more logs last summer, to grow shiitake and lion’s mane.

This spring, we are adding wine cap and cinnamon caps with different methods. We purchased two bags of wine cap spawn from Bobby Chandler of Mariaville Mushroom Men at the Saratoga Farmers’ Market, and following a diagram he drew for us, have created a bed of woodchips. We’re cultivating our cinnamon caps in grow kit bags.

For Chandler, mushrooms are a “lifestyle” that encompasses pleasure for the palate, medicine for long-term health, and nutrients for the soil that produces future food. While Chandler sells a range of mushrooms at the farmers’ market, his grow kits are aimed at market goers who want to try growing their own.

“I want people to use me as a resource,” said Chandler. “Education about mushrooms extremely important, and growing them is one way to learn more.”

Chandler’s grow bags sell for $25. He also sells the plug spawn commonly used to cultivate mushrooms on logs for $5 for 50 plugs. The grow bags hold 10 pounds of sawdust inoculated with the spawn of a specific mushroom. These, according to Chandler, are the easiest to grow mushrooms. Simply cut open the bags, mist the spawn every few days, and let the mushrooms grow inside. Each bag will produce about three to five pounds of mushrooms over two to three harvests, over a few months.

Plug spawn requires more work. Growers need to obtain logs, ideally cut in late winter or early spring, and drill holes into them. They then must hammer the plugs into the holes and wax them shut. The spawn permeates the logs and then after several months the logs almost magically fruit with mushrooms.

Both the bags and logs will offer repeat harvests and can be composted or buried into gardens after they stop producing to create a natural nutrient boost.

For us, both methods offer an opportunity to expand what we grow while also nourishing our soil. That’s a part of the “mushroom lifestyle” we hope to cultivate.

Pasta with Ricotta and Mushrooms

2. Meanwhile, bring a large sauce pan of salted water to a boil. Cook pasta until ad dente. Drain pasta, reserving ½ cup water. Add pasta, water, half the ricotta, walnuts, salt and pepper to skillet and toss to combine. Transfer to a serving platter and garnish with remaining ricotta and thyme. Drizzle with honey.

Notes: Other mushroom to use include: chanterelles, cremini, porcini