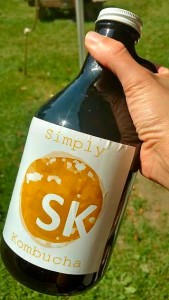 A desire to create a simple, healthful alternative beverage has quickly evolved into a new business known as Simply Kombucha.

Kombucha is a live, fermented drink made by combining yeast and bacteria with tea and sugar. It is generally low in sugar and calories and full of organic acids that are rich in antioxidants. It also is known for containing probiotics, which have been known to “aid digestion, support the immune system, reduce inflammation, and may even contribute to decreased depression and anxiety,” Bremser said.

Bremser said he and his family began brewing kombucha at home when his wife was being treated for breast cancer to aid in her recovery. Bremser did not like the sugar contents of commercially available kombucha and sought a simpler preparation. Homebrewing turned out to be a rewarding experience that the Bremsers decided they should share with others.

“We liked the simplicity and taste of making our own,” Bremser said. “I began to see it as something that could have a larger impact on the community and as a way to make my dream of being an entrepreneur a reality.”

The Bremsers begin their brewing process by adding an organic sweet tea to an active starter culture known as a SCOBY, or a symbiotic colony of bacteria and yeast. The yeast then eats the sugar to produce ethanol, which is eaten by the bacteria and produces organic acids. During the fermentation process, a new colony of bacteria forms and can be used to start other batches.

The Bremsers opened their brewery as Simply Kombucha in Hudson Falls in January, and currently sells kombucha at the Saratoga Farmers’ Market in 16 ounce bottles as well as refillable 32-ounce growlers. Simply Kombucha’s line of flavors is constantly growing with apple cinnamon, pineapple, and ginger cayenne as some of the regular offerings. The Bremsers also sell their product at the Troy Waterfront Farmers Market in Troy.

Visit the Saratoga Farmers’ Market at High Rock Park from 9 a.m. to 1 p.m. Saturdays and from 3 to 6 p.m. Wednesdays. 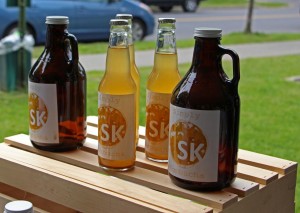 When you’re craving something sweet with a healthy twist, try this old-fashioned ice cream float with a new-fashioned flavor. The honey and kombucha meld together, bringing a sweet-sour overtone to your ice cream of choice.

Fill an ice cream float glass with your favorite ice cream. Mix the honey into the kombucha. Swirl over the top and enjoy!