Pass through the Saratoga Farmers’ Market at High Rock Park in the springtime and you’ll surely smell the flowers. The Market is glowing with locally grown hanging baskets, flowers in pots or six packs, along with perennials, herbs, and a riot of vegetable plants ready for the garden or a pot on the deck. 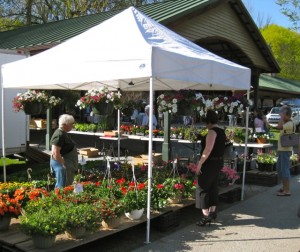 It’s the perfect time to gather up plants that the farmers grew themselves. Starting at the south end of the Market, stop at Dyer’s Farm, an original Market vendor. In addition to hanging baskets at variety of prices, Sherri Dyer said, “We have a large selection of hot peppers, and sell several thousand geraniums each year.”

After leaving Dyers’ stand head towards the main pavilion, stopping as you leave the south pavilion to visit two farms on your left and right. Steve Otrembiak and his family, of Otrembiak Farm, grow unusual varieties of herbs such as berrgarten sage, garlic chives and French tarragon, and often have pots of basil nearly ready for pesto. Don’t miss their dahlia tubers and seedlings of collards, Brussels sprouts and more.

Chris Lincoln of New Minglewood Farm raises at least 25 varieties of tomatoes, with 20 of those being heirlooms. “For some plants, I use soil blocks, which I make with a mold,” Chris explained, “The advantages are less plastic, and the plants don’t become root bound.” Chris already has tomato plants three feet high, for gardeners who just can’t wait.

Just past the Market’s shed, in the main pavilion on your right, is Scotch Ridge Berry Farm, which offers more than the berries. During a recent visit, Charles Holub pointed out potted herbs and said, “We offer a many tomato varieties, grown mostly from seed, including heirlooms,” He combats disease with a spray containing the beneficial Bacillus subtilis. 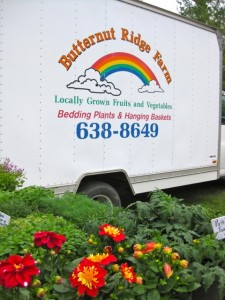 Butternut Ridge Farm and Burger Farm are just a few paces away. Both feature hanging baskets, potted flowers and vegetable starts. Debbie Stevens of Butternut Ridge commented that her father in law was one of the original vendors and today his great grandchildren sometimes help at the Market. Their tables overflow with colorful flowering and green vegetable plants, and a profusion of flowering plants hang in every corner.

Linda Burger of Burger Farm remembered their early days, “Our first crop was radishes which we took to the Menands Market on a motorcycle.” Their farm has grown considerably, and today Linda said, “We have two greenhouses full of herbs, begonias and hanging baskets.”

Turn toward the sidewalk in the north pavilion to visit Balet Flowers and Design. Suzanne Balet Haight, another second generation Market vendor said, “We like to specialize in traditional perennials such as delphiniums, sedum and sweet william. But we also offer the ‘Perennial Plant of the Year’, chosen for long blooming and easy maintenance.” This year’s winner is a variegated Solomon Seal. 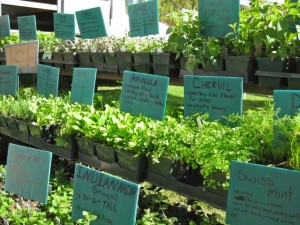 Across from Balet, Jim and Melissa Stannard of Stannard Farm have seen changes in customers’ preferences since they their early days. “In Saratoga,” Jim said, “People lately have been looking for individually potted plants, so they can mix and match, rather than buying six-packs or full flats.” Among their best sellers are potted herbs, and hanging baskets featuring two or more varieties, such as mixtures of Wade petunias, or Calibrachoa (“Million Bells”).

The northernmost vendor is on the lawn and past Stannards. Dawn Foglia of Wild Things Rescue Nursery packs her tent with all sorts of native plants. This year she has some lovely smaller sized varieties, such as Iris cristata, which is only five inches tall when in bloom, Uvularia (Merry Bells), and bloodroot.

If your hands are full, you can drop off purchases (Saturday only) at the ‘Veggie Valet’ tent. The volunteers from Friends of the Market will hold your purchases until you return with a vehicle.