Did you know that farmers markets play a role in fighting food insecurity?

That’s one of many findings that the federal Nutrition.gov website offers. In a report prepared by the U.S. Department of Agriculture on “The What and Why of Local Foods,” researchers argue that the food security of a particular locality in the United States might very well be dependent on the strength and vitality of its local food system.

The report notes that 50 million Americans lack food security, and that at least part of the challenge that they face is that they reside far away from outlets that distribute healthy food. Nearly 25 million individuals who lack food security live more than a mile away from a supermarket, which make access to food a challenge when the individuals also lack cars or access to public transportation. The issue grows more significant in rural areas where the nearest market might be an hour’s drive away.

These statistics highlight the role that highly localized, producer-oriented farmers’ markets might play in strengthening overall access to healthy foods. By having an ability to sell fruits and vegetables at a local market, local farmers are not only able to sustain themselves but also can create more nearby local outlets by which elderly residents and lower income individuals are able to easily access these foods. In addition, a growing number of farmers markets are accepting SNAP benefits and participating in other publicly funded ventures to help make their products available to such individuals. 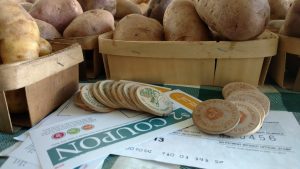 The Saratoga Farmers Market is participating in these ventures. Our market not only accepts SNAP benefits but also Fresh Connect and Farmers Market Nutrition Program coupons, which enable eligible recipients to receive fresh produce. Farmers then are able to redeem the coupons for cash through the state, which helps make the programs viable for them, as well.

The market’s vendors also have been donating produce and other goods weekly to the Franklin Community Center’s food pantry, as part of this endeavor. Friends of the Market members are organizing this pilot venture, and have a box available at the table for customers who wish to purchase items at the market for donation. Please support these worthy ventures.

More information about the role of farmers markets in communities throughout the United States is available at Nutrition.gov. The site, funded by a number of federal agencies, offers a treasure trove of reports, data, interactive charts, and even cooking tips for seasonal fruits and vegetables. Their underlying message is simple: When you shop at a farmers’ market, you’re not just making a purchase. You’re participating in a community movement that ultimately will be beneficial to all.