Saratoga Farmers’ Market customers know Sheldon Farms from Salem in Washington County especially for all kinds of potatoes, featured at the stand from late summer into early spring, and for the amazing sweet corn in summer. Even this late in the potato season, Sheldon Farms brings five varieties to the market. However, if a customer doesn’t look at all the offerings, they will miss one of the best, the maple syrup the Sheldon Farms produces every year. 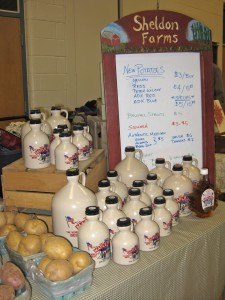 Maple sugaring season continues this week, and owner Albert Sheldon predicts the trees are likely to produce an average amount of syrup, which will mark a huge improvement over last year’s disastrous yield.  To produce a good run of sap, the days must be warm, but not so warm that trees begin to bud and cold enough at night that the flow pauses.

“Although last week the temperatures were too cold,” Albert explained, “And the sap wasn’t running,” he hopes for a more normal flow now. Contrast this with 2012’s abnormally warm weather, when sap season ended almost as soon as it began, and the supply of syrup was minuscule. “Like anything in agriculture,” Albert said philosophically, “no two years are alike.”

“Sugaring is a tradition I want to keep going.” Albert noted that he continues to produce syrup much like his ancestors did in Rupert, Vermont, where he still harvests some sap on land that was part of the original homestead. Sugaring provided dairy farmers with income in early spring in the 1800s, and provided work for farm hands just like it does today. Albert’s employees work in the sugar bush to harvest the sap and make the syrup, just before the rush of plowing fields and spring planting begins.

The Sheldon family history in farming and in the United States traces to Colonial times when a Sheldon settled in Connecticut. Some family members migrated to Deerfield, Massachusetts, and later to Rupert. Growing potatoes, running a dairy farm and maple sugaring are themes that run through the family’s heritage for nearly all that time.

In 1946 Albert’s father and an uncle moved to Salem from Rupert. His father bought land south of Salem which was suited to growing hay and grain crops and potatoes, and met Albert’s mother when buying seed potatoes. His uncle purchased another parcel of land for the dairy farm and used the nearby pasture land. When Albert’s generation came of age, he and some cousins started Woody Hill Farm, which is easily seen on the east side of Route 22, closer to the Village.

After twenty years in the dairy business, Albert returned to growing potatoes, which his father had continued while Albert was with Woody Hill Farm. Soon Albert began to diversify by adding sweet corn, and later a colorful array of vegetables. The farm stand and the stand at the farmers’ market sparkled with green peas and green beans, summer squash, tomatoes, peppers, eggplant and even Brussels sprouts.

But there will always be the maple syrup. It and honey are the primary locally-produced totally-natural sweeteners. The sap is running now, draining through plastic tubes and into collection vessels. At the sugar house, 40 gallons of this sap are boiled down into one gallon of syrup. Finally the pints and quarts and half gallons find their way to the Saratoga Farmers’ Market where we can all enjoy this treat on pancakes or French toast, or as an ingredient in the following recipe, adapted from the Vermont Maple Cookbook.

(Use Grade B syrup, if available, which is more flavorful)

(Prepare the winter squash. Sandy Arnold of Pleasant Valley Farm, reports that the butternut squash still available at the farmers’ market is smooth and creamy and perfect for ‘pumpkin’ cheesecake. Cut in half one butternut squash, remove the seeds, and bake until tender. Mash and use one pound of the squash meat for the cheesecake. Reserve the rest for another use.)

In a large mixing bowl, beat the cream cheese until fluffy, and then gradually beat in sweetened condensed milk until smooth.

Add ¼ cup Sheldon Farms maple syrup and the remaining ingredients, and pour into the prepared pan.

Bake at 300°F for an hour and a quarter or until set (center will be slightly soft). Cool, then chill.

Toast the pecans on low heat in a frying pan in butter until just golden and fragrant.

In a saucepan, combine ¾ cup maple syrup and ½ pint whipping cream. Bring to a boil and continue to boil rapidly while stirring occasionally for 15-20 minutes until the mixture is thick.

Cool the glaze, and add the toasted pecans. Cut the cheesecake into servings, and drizzle the glaze over each piece.