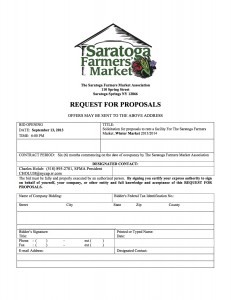 Saratoga Farmers’ Market Association has issued a Request For Proposals as it begins a search process for a new winter market location. Each year from November through April, every Saturday from 9 a.m. to 1 p.m., the market hosts roughly 30 farms and vendors selling a full range of locally grown and  produced items.

Earlier in July, the market received notice from the Saratoga Springs City School District that the market’s vendors will no longer be able to set up on Saturdays in the Division Street Elementary School, which has housed the indoor market for the past several years. The district has received recent legal advice stipulating that city schools are prohibited from allowing private entities to use school facilities to make a profit, “unless 100% of proceeds collected are distributed in the community for charitable purposes.”

“Our search for a new space will include outreach to local educational institutions, city leaders, real estate offices, and others who may know of a suitable location,” notes Charles Holub, president of Saratoga Farmers’ Market Association. “We’re moving quickly to secure a site, and we look forward to continuing to bring farm-fresh products to the community during the winter.”

For vendors interested in applying for the winter market, the application period begins August 1st and runs through August 14th, and applications can be submitted online at www.managemymarket.com. Additional information on becoming a vendor is outlined on the market’s website.

The Saratoga Farmers’ Market is celebrating its 35th anniversary in 2013. During the outdoor market season at High Rock Park, 50+ vendors bring a wide variety of products to the twice-weekly market, which runs from the beginning of May through the end of October. The Association also runs outdoor markets in Malta (Tuesdays) and Clifton Park (Thursdays).

Saratoga Farmers’ Market Association maintains a “producer-only” standard for all of its markets, requiring its members to grow or produce their goods in Saratoga, Schenectady, Rensselaer, or Washington counties to ensure that products are fresh and unique, not purchased for re-sale. The market makes a few exceptions to this rule for foods not available locally, including fresh fish and mushrooms. By adhering to this standard, the market ensures that sales provide economic, ecological, and social support to local communities.