Celeriac: Looks Can be Deceiving 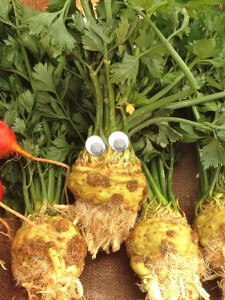 Celeriac may be one of those root vegetables you saw at the Saratoga Farmers’ Market and thought, “What is that ugly thing and why would anyone buy it?”

Well, looks can be deceiving. Beneath its tough exterior lies a wonderful concentrated celery flavor. This softball sized root vegetable may also be referred to as turnip-rooted celery, knob celery or celery root.

Celeriac, a cousin of anise, carrots and parsnips, is a variety of celery cultivated for its edible root. As a root vegetable, celeriac is a great substitute for potatoes and other starchy vegetables. Unlike other root vegetables however, it contains only 5-6% of starch by weight, similar to carrots.

Celeriac is a good source of vitamin C, vitamin B6, phosphorus and potassium. As you can see from the recipe nutrient analysis below, it’s also a significant source of sodium, similar to celery.

When purchasing celeriac, be sure the root is firm and brown with no green tinge. Store it for up to one week in the refrigerator. The optimal conditions for longer storage (3-4 months) are at a temperature between 32 – 40 degrees (above 45 degrees it becomes woody and starts to sprout) and in a very moist environment.

A refrigerator will not give the moisture level required for long term storage, so it’s recommended that celeriac and similar root crops be layered in moist sand and placed in a cool basement.

To prepare celeriac for cooking, use a paring knife to slice off the thick, knobby skin. There will be quite a bit of waste – a 1 pound celeriac will yield a ½ pound (2 cups) of flesh.

You may enjoy eating celeriac raw, cut into strips for dipping, or matchsticks to put in a salad. It makes a great addition to soups and stews, or mashed on its own or with potatoes. Try the recipe below and you’ll learn why people love the flavor under the ugly exterior of celeriac.

Trim the skin off the celeriac, and dice into ½ inch cubes. Heat the olive oil in a skillet on high heat. Add the celeriac, thyme, garlic, salt and pepper. Cook for about 5 minutes, stirring frequently. Add the water or broth, reduce heat to a simmer, cover and cook for another 25 minutes or until the celeriac is fork tender, drain. Using a potato masher, mash to the desired consistency, adding more water or broth, if necessary. Makes 4 servings.

Ingredients marked with an asterisk (*) are available at the market. For information about food and nutrition contact Diane Whitten at Cornell Cooperative Extension at 885-8995or dwhitten@cornell.edu.