On a recent Wednesday at the Saratoga Farmers’ Market, Jack Powell and his three-man band the Zucchini Brothers were performing. Powell grinned as a mother and child began tapping their feet to the beats.

Then, as the child started to waddle in rhythm with the music and the mother began to video the moment on her cell phone, Powell asked for the name of the child. He received the answer, began improvising and within seconds was singing lyrics interspersed with the lilting syllables of Gi-o-van-ni.

Moments like this are part of what make making music at farmers’ markets meaningful to such performers as Powell. For him, the people keep bringing them back.

“The calendar books six months in advance,” says market director Julia Howard. “I’ve been booking bands for nearly 15 years and most musicians are all about the money – not so at the farmers’ market. They get so much more.”

Howard says that market musicians are generally not paid in cash. Their income comes from tips from customers and donations by market vendors.

Singing for one’s supper is rarely seen as a sustainable salary. Still, the musicians call playing farmers’ markets one of the best gigs around. For them, it’s about being a part of a community of healthy eaters as well as a chance to promote their art.

The crowd disperses to continue shopping, but then another forms. The ritual continues till the market’s end.

About a half hour before the market’s close, interns or staff start pulling wagons through the pavilion, collecting donations. Soon, a feast surrounds the musicians: lettuce and cabbage, carrots and squash, cheeses, honey, milk and savory pastries.

“The market is all about community and music ties it together,” says Marcie Place of the Chocolate Spoon.

Adds Carl Deppe, of Row to Hoe Farm. “It lifts the spirits.” 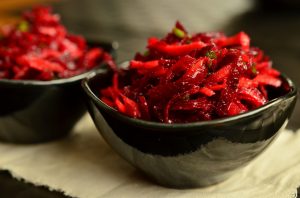 1. Peel the beets and the shallot. Combine them in the bowl of a food processor fitted with the metal blade, and pulse carefully until the beets are shredded; do not puree. (Or grate the beets by hand and mince the shallots; combine.) Scrape into a bowl.

2. Toss with the salt, pepper, mustard, oil and vinegar. Taste, and adjust seasoning. Toss in the herbs, and serve.