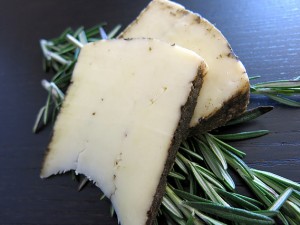 Learning to make cheese is a relatively simple process. Perfecting the art of cheese making might take a lifetime. Even after working with cheese for more than 10 years, Sean O’Connor says he continues to learn new things.

O’Connor owns R&G Cheese Makers, one of the newest vendors at the Saratoga Farmers’ Market. He started the business in Cohoes seven years ago but moved recently to Troy where he was born. The business, named after his sons Ryan and Gavin, produces cheese from locally sourced cow and goat milk provided by Willow Marsh Farm and other farms in Saratoga County.

Today, the company makes a variety of cheeses as well as yogurt. Each cheese starts more or less the same way, with milk. From there, however, each one goes through a different process in order to achieve its particular taste, O’Connor said. For example:

• A fresh mozzarella will take a full day worth of work, but will be ready to eat right away.
• A fresh chevre will take a few hours of work over the span of four days before it is ready.
• A good goats’ milk blue cheese will only take a half a day of work but will then need to be carefully maintained over two to three months before it reaches the perfect flavor.
• A stronger flavored cheese, such as a cheddar, will be aged anywhere from 6 months to a few years.

In addition to the classic cheeses, O’Connor makes varieties that include such items as layers of truffles, fennel pollen, and peppercorns. A couple of favorites include a fresh maple chipotle chevre along with an aged ramp cheese, made from the early spring seasonal ramps.

R&G cheeses are sold at local co-ops and specialty markets in addition to the Saratoga Farmers’ Market. In addition, several area restaurants feature O’Connor’s cheeses in their preparations.

Visit R&G Cheeses at the Saratoga Farmers’ Market, which takes place twice a week May through October at High Rock Park. The market operates from 3 to 6 p.m. Wednesdays and 9 a.m. to 1 p.m. Saturdays, with more than 60 local vendors. 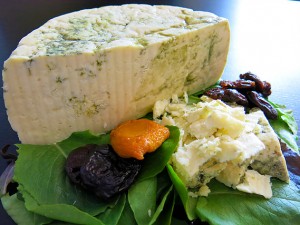 Blend all dressing ingredients together in an immersion or tabletop blender while adding olive oil through cover while running.

Place cleaned salad greens in a large bowl. With a large spoon, run vinaigrette around inside of bowl. Gently toss greens into the center of the bowl. Do not over dress.

To Assemble and Plate:

Place serving of mixed greens on a plate. Cut and place a wedge of goat cheese on top of greens. Slice figs ½ inch thick and stack 2 off set on plate. Scatter roasted pistachio nuts. Drizzle honey and finely chopped chives on top of greens. Drizzle plate with fig molasses.