More sunshine and balmier temperatures are filling the days, despite the overnight frosts that still threaten the tender seedlings being nurtured for the summer. With the increasing warmth, vendors at the year-round Saratoga Farmers’ Market are talking eagerly of “going outdoors.” 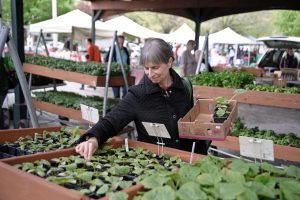 “Going outdoors” means the market will make its annual move from its winter location in the Lincoln Baths Building at the Saratoga Spa State Park to High Rock Park. The move begins next week: the final winter market at Lincoln Baths is tomorrow, 9 a.m. to 1 p.m. The summer season will kick off 3-6 p.m. Wednesday; the grand opening will be at 9 a.m. Saturday.

“I love being outside,” said Marcie Place, owner of the Chocolate Spoon. “We have a nice hearty winter market, but six months indoors is enough.”

“We’re back in the fresh air, and in town,” added Phyllis Underwood, owner of Shushan Hydro Farms. “It feels like coming home.”

High Rock Park has been home for the Saratoga Farmers’ Market since the 1990s. Having an opportunity to operate twice a week allows farmers and other vendors to provide Saratoga area residents with an abundance of fresh food, garden starting seedlings, prepared foods, and other items. It also lets the market reach several different groups of customers ranging from families and downtown Saratoga employees on Wednesdays to these groups along with weekend tourists on Saturdays. This gives each of the weekly markets a distinct identity.

“We get so many schoolchildren on Wednesdays from the Lake Avenue Elementary School,” said Place. “It creates a sense of fun. And Saturdays are like a huge community festival, that everyone joins into.”

Market director Julia Howard encourages shoppers to stop by High Rock Park on Wednesdays, even if they make most of their purchases on Saturdays. The mid-week market continues to expand with 24 vendors in 2017, an end-of-school celebration on June 28, and the second annual Power of Produce Club for children.

“It’s an entirely different experience,” said Howard, of the winter to summer transition. “Indoors, we’re like a tight-knit community. Outdoors, everything gets bolder, brighter.”

Visit the final indoor Saratoga Farmers’ Market 9 a.m. to 1 p.m. April 29 at the Lincoln Baths Building in the Saratoga Spa State Park. Then, join us for the summer 3-6 p.m. Wednesdays and 9 a.m. to 1 p.m. Saturdays at High Rock Park.