From engineer to fruit farmer, Charles Holub, proprietor of Scotch Ridge Berry Farm, has come a long way since retiring a little over 20 years ago. “I spent 35 years as an engineer and contract administrator with the state of New York,” recalls Charles, “We started growing Christmas trees before I retired, and expanded into fruits.” In addition to farming, Charles is also the current president of the Saratoga Farmers’ Market Association, the organization that manages the market locations in Saratoga, Malta, and Clifton Park.

Charles’ interest in Christmas trees, which started out as a hobby business almost 35 years ago, is still flourishing. He has a dedicated group of customers who buy their trees every holiday season at the Saratoga winter market, and at any given time, he and his wife, Katherine, have almost 10,000 trees on their 80-acre property in Duanesburg.

“On the rest of the land, fruits are the main thing,” Charles says, adding that 20 total acres are used for the fruit crop. In the coming week, customers can expect to find blueberries, as well as 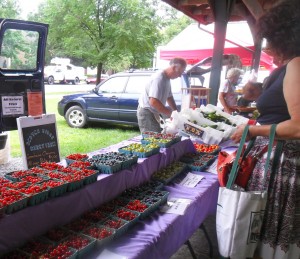 currants and gooseberries, Charles says. Although the latter two are very popular in Europe, they haven’t quite caught on in the United States, according to Charles. But, in the ten years that he has sold them, they have acquired a little following in Saratoga.

“They’re very unusual berries,” he says, describing the flavor of gooseberries as “sweet-tart,” and currants as “tart-sweet.” In addition to those two “specialty fruits,” Charles’ primary products are strawberries and raspberries, which are grown in high-tunnels with no spray or chemicals.

Charles expects to have a crop of ever-bearing strawberries in about two weeks. “We plant them every spring and they bear every year, for one year,” he explains, and although they’re very labor intensive, they result in a near year-round strawberry crop. Although the summer raspberry crop was ruined by hail, customers can soon look forward to fall raspberries, which will be available in late August, all the way through Halloween.

To learn about the taste of red currants, Scotch Ridge Berry Farm recommends these recipes (from Cornell Cooperative Extension) for a wine cooler and a salad vinaigrette. 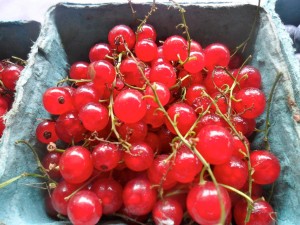 Crush the berries through the sieve of a food mill, or mash them through a strainer with the back of a wooden spoon. It’s okay if some of the tiny seeds get into the puree. Makes 3/4 cup puree.

Stir honey into wine until dissolved. Combine all ingredients and serve over ice. Garnish with a sprig of mint. Makes 6 servings.

Combine all ingredients for use as a salad dressing. The intense flavor of this vinaigrette is a good accompaniment to strongly flavored greens such as arugula. Makes 12 servings.