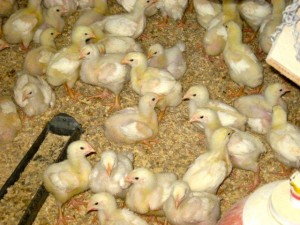 Chicks definitely can travel long distances from commercial hatcheries to the farms because their bodies have stored egg yolk to supply them with nutrition for the trip. This is also true for baby chicks hatched out by a mother hen in a barn. The broody hen doesn’t even leave her nest for a day or two, and only then starts to show the peeps what to eat.

Our four farmers who raise these fryer- or roaster-sized chickens have extensive experience with these birds and have learned what works for them. All raise the birds humanely and carefully, so they have plenty of room to move around and be normal chickens that can flap their wings and scratch in their bedding indoors, or chase bugs and eat grass outdoors.

All raise a fast growing hybrid called a Cornish-Rock, bred for especially large breasts and fast growth, which was developed from the White Cornish originally from Great Britain, and the larger White Plymouth Rock produced in the United States nearly 200 years ago. The Kilpatrick farm also raises a somewhat slower growing four-way hybrid, the Freedom Ranger which originated in France. 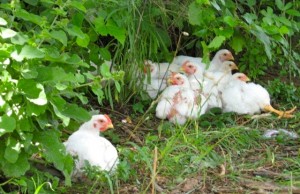 Liza and David Porter of Homestead Artisans, as well as Michael Kilpatrick of Kilpatrick Family Farm, raise the chicks first in a heated brooder, then move them outdoors to pasture. Liza said, “We intensively pasture our chickens outdoors on the grass, with their houses moved daily. They live as chickens, rather than ‘poultry units,’ where thousands of birds might be in one house. And they return their manure in small quantities all over the grass.”

Michael Kilpatrick commented that their chicks spend two or three weeks in a brooder then move to the outdoors, “They’re grown in floorless pens we move once, if not twice a day, where they eat grass and bugs and whatever tasty morsel that happens by, along with their chicken feed.”

Arnold and Marilyn Grant of M&A Farm and Dick and Peggy Ayers of Brookside Farm keep their birds inside. Peggy recalled, “We used to raise them outside, but weather and predators were causing problems. Now we raise them in a heated (when needed) and well ventilated barn.”

The Grants manage their birds in a similar way. “The barn has three sections and they have a lot of room to move around,” Arnold explained. His chicks arrive every two weeks, and once the first batch is in his customer’s hands, that section of the barn is ready to receive 100 more peeping chicks.

Liza said, “The flavor and texture are excellent. They must be tried to be believed.” Arnold Grant feels, “The most important part of flavor is what we feed them.” His feed is locally mixed at a nearby feed mill. Liza commented that pasturing adds extra nutrients to the chicken meat. 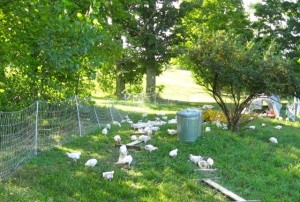 Various studies back this statement. For example, a recent on-line article from National Geographic reported that pasture-raised poultry contained less total fat, less saturated fat and more Vitamin A and Omega-3 fatty acids, than standard USDA data for what is typically found in grocery stores.

The Ayers’ birds will make their summer debut at the opening Saturday of the Summer Market, May 4. They offer whole or cut up chicken. Porters’ and Arnolds’ whole roasting and frying birds will be ready on May 8. Kilpatrick’s cut-up chickens and chicken cuts will be ready at varying times of year; just ask at their stand. These chickens are delicious butterflied and grilled, roasted, curried, fried or stewed, as illustrated by the following two recipes.

Simple Roasted Chicken
Recipe from Liza Porter: “This is the world’s easiest recipe and the rewards are fabulous.”

Put one whole roasting chicken in a pan and roast for 20 minutes per pound.

Remove from the oven, and let the chicken rest on a carving platter for about 15 minutes. Carve the chicken and serve.

Cook in a large crock pot on high for about four hours or until done.

Discard the pineapple, because it loses flavor. Add more pineapple from a second can if desired.

Shred the chicken and serve with rice.