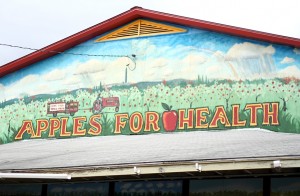 If you can’t decide which type of apple to take home from the Farmers’ Market, stop by the Saratoga Apple table, where Christine Gaud will happily make some suggestions as to what you might enjoy.

Gaud, who together with her husband Nate Darrow, a third generation apple farmer, owns the Saratoga Apple and Farm Market on Route 29 in Schuylerville, brings several types of apples to the market year-round, including familiar favorites such as Cortland, McIntosh, and Honeycrisp, and the lesser known varieties like Jonagold and the exotic sounding Zestar. 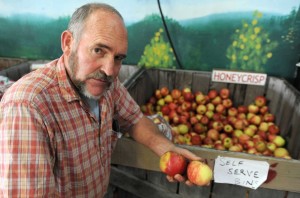 Gaud and Darrow have owned Saratoga Apple since 1994. When they purchased the operation, 125 acres were being farmed. They have since scaled the operation back to 40 acres of apples, with an additional six to eight cultivated acres producing asparagus and other vegetables, sour cherries, plums, raspberries, and more. Some of the items are grown in adherence to “biologique” methods, the French word which means following practices similar to organic farming. 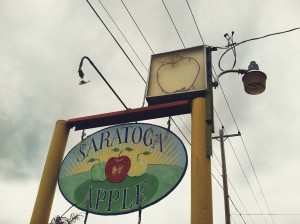 “This is a busy time of year for us, as we continue to bring products to consumers via farmers’ markets in the region, and we also have crowds of people enjoying picking their own apples at the orchard. On the weekend, we have hundreds of people coming out to ride in the wagons, pick apples, sample the cider donuts and pies, and enjoy the fall scenery on the ridge in Schuylerville,” notes Gaud.

In addition to selling at farmers’ markets, Saratoga Apple has its own farm market store, which is open seven days a week year-round, carrying a variety of produce items, baked goods, and pantry items.

Saratoga Apple has the ability to supply fresh apples year-round due to the use of refrigerated warehouses and long-term controlled atmospheric storage which ensure that their products will keep through the winter and the following spring.

“These cold storage rooms [are] opened one by one over time. Each will yield very crisp, juicy apples, due to the low oxygen levels in the rooms, which slows the respiration of the apples,” Darrow explains. That means that customers at the Saratoga Farmers’ Market can enjoy crisp, juicy apples straight through to the summer of 2016! 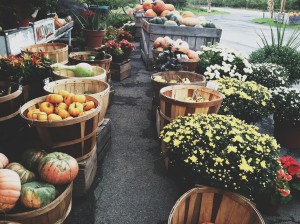 Whether you buy them at the Farmers’ Market or on a trip to pick-your-own at their orchard in Schuylerville, one thing’s for certain, Saratoga Apple’s year-round selection can’t be beat. And here is a delicious fall recipe that will help put your apples to good use — It’s a tender, moist cake full of old-fashioned comfort. For festive occasions try topping it with a dollop of maple whipped cream! Enjoy! 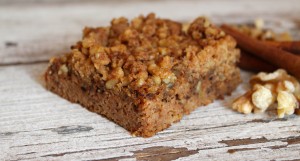 * Ingredients can be purchased at Saratoga Farmers’ Market

In separate bowl, combine all dry ingredients, and then gradually add to liquid ingredients. Add vanilla. Batter will be stiff.

Fold in apples and nuts.