that the Saratoga Farmers’ Market vendors have donated more than 400 pounds of fresh fruits, vegetables, dairy products, and other food items to the Franklin Community Center’s food pantry in Saratoga Springs since October 15? 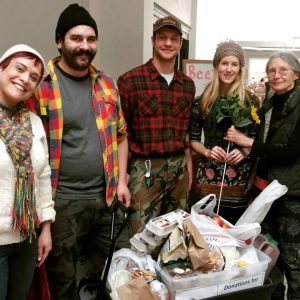 The donations are part of a new initiative launched by the farmers’ market and the food project that is being facilitated by the volunteer Friends of the Market group. Its goals are to:

• ensure that produce from local farmers that might be less saleable by the end of a market day but still healthful and flavorful not go to waste;

• build a stronger alliance between the farmers’ market and the communities it serves;

• encourage consumers of all income levels to see the Saratoga Farmers’ Market as a welcoming space where one can purchase locally raised produce and farm produced items at an affordable price;

• encourage food pantry clients and others to use local produce to bolster the health not only of their budgets but of themselves and their families, as well.

The project began as a result of outreach from the Capital District Food Pantries, which is dedicated to helping farmers and food pantries connect with one another. How it works is fairly simple. Toward the end of each Saturday market, Friends of the Market volunteers visit food vendors and ask them if they have any items that they would like to donate to the Franklin Community Center’s food pantry.

I volunteer with both the market and the food pantry. I gather the donated items and transport them to the center. There, I sort out the donations, weigh them, and store them in appropriate refrigerated or shelving spaces.

Often, I leave notes for the other volunteers at the center as to how to prepare such donated items as pea shoots, braising greens, watermelon radishes, pickles, and herbs. All of these items are greatly appreciated by food pantry users but often create an initial question of what to do. My farm-to-fork sampling program at the center and a garden established on site also are part of the project to interest more people in taking advantage of the diversity of produce that our region has to offer.

We would love to see the program expand so that farmers are feeding not only consumers who seek emergency food assistance at the Franklin Community Center but also other food banks in the region. We also commend the many Saratoga Farmers’ Market vendors who have been donating to the effort and thank those who also contribute to other food pantries. These efforts are changing the perception of food pantries as recipients of only surplus canned or boxed items, and are increasing awareness of the value of nutritional health across all income sectors.

The Friends of the Market encourages market customers to join the effort. Shoppers can buy a small amount of extra produce for the Franklin Community Center’s food pantry while making their regular purchases. Donations can be left at the Friends of the Market table (located on the ramp behind Shushan Hydroponics). Please leave only items purchased at the Saratoga Farmers’ Market. Other goods can be donated directly to the Franklin Community Center.