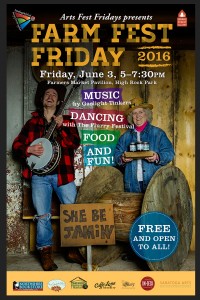 The free, family friendly event will take place at the High Rock Park pavilions where the farmers’ market normally operates on Wednesday afternoons and Saturday mornings. It will feature a variety of arts; music, dancing, children’s activities, and a mini-farmers market. Produced by Arts Fest Fridays, Farm Fest is a collaboration of local arts and business partners coming together to offer the community an artistic experience.

“This event offers members of the Saratoga community an opportunity to experience the vibrant diversity of the Saratoga art scene,” said Saratoga Farmers’ Market administrator Julia Howard. “Part of that scene includes the farmers’ market. Farm fresh produce, meats, cheeses, baked goods, and jams and jellies will be available for purchase along with a variety of prepared foods and beverages.”

A special FarmFest feature will be sponsored by the Saratoga Arts Council on “Tempered by Memory,” the sculpture that artists Noah Savett and John Van Allstine created at High Rock Park. The artists will discuss the piece.

The Saratoga Farmer’s Market Association plans to introduce a new summer program for children during FarmFest known as the Power of Produce Club. The activity, also known as the POP Club, is a farmers market-based program that seeks to teach children about fruits and vegetables, local food systems and healthy food preparation through fun activities. Children who attend POP Club activities will receive a $2 token to spend on fruits and vegetables.

FarmFest also will include wine and cider tastings provided by Oliva Vineyards and Slyboro Cider.

Other FarmFest activities include:

• Contra-dancing, led by the Flurry Festival.

• A petting zoo, hosted by the Sweet Chickadee School.

• A talk on the history and qualities of the High Rock Park springs, hosted by Saratoga Springs Mineral Waters Tours.

• Live music by the Gaslight Tinkers, presented by Caffe Lena; and

The Saratoga Farmers’ Market welcomes such partnerships as a way to promote farming as a vital aspect of the Saratoga community. The market operates from 3-6 p.m. Wednesdays and 9 a.m. to 1 p.m. Saturdays from May through the end of October.