Growing asparagus might be like raising a child. You plant it once. You nurture its tender shoots, and then you watch it grow so fast that you can barely harvest it fast enough.

For farmers, asparagus requires patience and an intense amount of labor. It also brings unending joy.

“It’s really something special,” says Christine, of Saratoga Apple, who sells asparagus at the Saratoga Farmers’ Market from early May through June. “As a perennial, its roots produce every year.”

Unlike most vegetables cultivated in the United States, asparagus harvests cannot begin until the plants have established strong root systems, which typically takes three to four years. Farmers usually start their crops from “crowns”, which are the roots of a year-old plant. After being transplanted in a deep, five to eight-inch furrow, the crown sends up a few shoots. Farmers let these shoots turn to feathery ferns and drop down into the soil for a few years. This gives the plant time to mature, enabling it to push up from the ground plump, juicy spears repeatedly through late spring. At this stage, some say the plants will produce for life.

“It’s one of the easiest plants to grow,” says Eric Darrow, “and, at times, one of the most challenging.”

One challenge is maintenance. Each spring, the Darrows burn and mow the field to rid it of weeds. Although weeds will re-appear, the initial clean up creates space for the asparagus to grow. They usually mow again about half-way through the season when, Christine notes, “the grasses get so high that the asparagus can’t be seen.”

A second challenge is the harvest. Each spear must be cut by hand, just above the soil. In the season’s peak, the spears can grow so quickly that the field is harvested twice a day.

The plants end their yearly life cycle when the spears feather out to ferns, produce berries, and dry up. The berries often get blown elsewhere.

Christine invariably discovers some asparagus growing amid her raspberries every year. 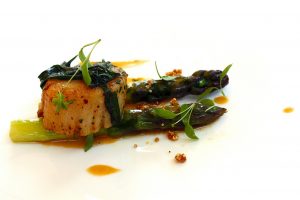 2. Heat 1 tablespoon oil in a 12-inch heavy nonstick skillet over moderately high heat until hot but not smoking, then sauté asparagus, stirring occasionally, until just tender, 5 to 6 minutes. Transfer to a plate, reserving skillet off heat (do not clean).

3. Pat scallops dry and sprinkle with pepper and 1/2 teaspoon salt. Add 1 tablespoon oil to skillet and heat over moderately high heat until hot but not smoking, then sauté half of scallops, turning over once, until browned and just cooked through, 4 to 6 minutes total. Transfer scallops to another plate as cooked.

4. Wipe out skillet with paper towels, then add remaining tablespoon oil and heat until hot but not smoking. Sauté remaining scallops, turning over once, until browned and cooked through, 4 to 6 minutes total, transferring to plate. (Do not wipe out skillet after second batch.)

5. Carefully add wine to skillet and boil, scraping up brown bits, until liquid is reduced to about 2 tablespoons, about 1 minute. Add any scallop juices accumulated on plate and bring to a simmer.

6. Reduce heat to low and whisk in butter, 1 tablespoon at a time, until incorporated.

7. Add asparagus and remaining 1/4 teaspoon salt and cook until heated through, about 1 minute.