Wayne and Phyllis Underwood grow hydroponic tomatoes, herbs, greens, and cucumbers in 18,000 square feet of greenhouses at Shushan Valley Hydro Farm. Customers at the Saratoga Farmers’ Market can enjoy these summer-time treats from fall through winter and into early summer.

It feels like spring all winter inside those houses. Phyllis explains, “The tomato plants grow to 45 feet long on elaborate trellises from the time they begin to bear in October until the season ends in early July.” The aromas of basil, thyme and other herbs fill another greenhouse where greens like lettuce and arugula also grow, and cucumbers fill the third.

The hydroponically grown vegetables and herbs are free of herbicides and pesticides. And as Phyllis explains, “The eco-footprint of our operation is much less than for the same ingredients shipped to New York from Mexico or California.” 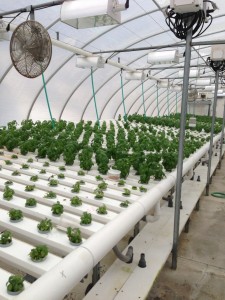 Wayne and Phyllis were not always farmers and nor were they always in this vegetable business, but their own roots are in Washington County. Although Wayne’s parents had been farmers, they sold out when he was four years old. Drawn to farming, Wayne would visit neighbors and eventually worked on some farms. Phyllis’ father had hobby farm to provide good food for the family. Together Wayne and Phyllis rented a dairy farm in Fort Edward, and soon began searching for a place of their own.

One day in 1983, long before Shushan became an in-place to live or to start a farm, a realtor took them along Juniper Swamp Road. “Grass was growing up the middle,” Phyllis remembers, “And I thought, ‘Where are you taking me?’” They settled into the 200-acre farm, and had the dairy for five years.

When they realized that the dairy farm wasn’t going to work out for them, they again began scouting for another farming enterprise. Around that time they took the kids to Disney World and Epcot Center. On a behind-the-scenes tour at Epcot, they saw vegetables growing hydroponically in greenhouses, with the roots in nutrient solution and the greenery pointing toward the sun.

Soon the Underwoods were taking workshops, building greenhouses, buying supplies, planting summer crops at the end of the summer, and marketing the products first to wholesale customers, and today at several farmers’ markets. “Talking to customers at farmers’ markets and providing them with quality, healthy, locally grown products is the most rewarding,” according to Phyllis.

The greenhouses occupy only a small portion of the 200 acres, which Wayne and Phyllis still own. Now they let other farmers use some hay and pasture land and they raise Japanese larch and red pine on about 50 acres. The hydroponic vegetable business has grown enough that five other family members also work on the farm.

Becky Dennison, Phyllis’ niece, is the face of the farm at the Saratoga Farmers’ Market, the second farmers’ market the Underwoods joined. Talk to Becky; she’ll tell you all you need to know about the farm and the veggies.