You might know Arnold Grant as the man behind the grill, making Saratoga Farmers’ Market’s iconic breakfast sandwiches, which draw in hungry customers from all ends of the market. But, you might not know that M&A Farm, 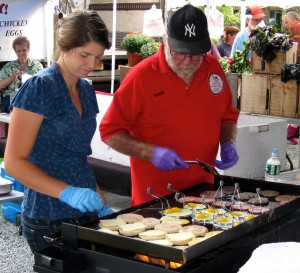 located in Durkeetown (Washington County), between Fort Edward and Argyle, has quite a legacy of its own.

The farm has already surpassed its “golden anniversary,” and so too have Arnold and his wife. They have been partners in all aspects of life since the mid 1950s. “We were sweethearts in high school,” says Arnold, adding that the duo met in 1954, married in 1955, and started farming in 1956.

Interestingly, the 90-acre farm has actually been in Arnold’s family for over 200 years. According to Arnold, his earliest memories are of the farm’s days as a dairy operation, first owned by his great-uncle, and then, his father.

Over half-a-century later, the farm is still located in Durkeetown, although in 1991, Marilyn and Arnold made the shift from dairy to Angus beef. “We had milked dairy cows for 35 years, and thought it was time for a change, something less labor-intensive,” Arnold remarks.

The farm now sells “tender, nutritious and delicious” meat, thanks to what they call a “cow/calf operation,” in which the calves are born on-site and raised on a healthy, hearty combination of mother’s milk and green pasture.

“Right now we have 10 cows with babies by their sides. We even have one pair of twins,” Arnold says. “Two girls, one red Angus and one black Angus,” he adds, chuckling. Arnold explains that the calves spend about six months with their mothers before being weaned in the winter.

M&A Farm’s products include pork and poultry, too. Marilyn and Arnold obtain their Heavy White Cornish Halicross chickens from a hatchery in Connecticut, and then raise the birds cage-free in an open barn. The birds are fed grain that’s free of animal byproducts and antibiotics. The farm’s laying hens enjoy a similar lifestyle, producing the delicious brown eggs that are featured in Arnold’s breakfast sandwiches.

M&A Farm, now a market mainstay year-round, has had a stand for 15 years, and is well-known for both its meat and eggs, as well as its sizzling breakfast sandwiches, which sell at an average rate of 300 per week.

*Items can be purchased at Saratoga Farmers’ Market

In a large pot, cook whole chicken in 3 quarts of simmering water until tender. (Approximately 1.5 to 2.5 hours; the longer the simmer, the richer the broth.)

Once chicken is cool enough to handle, discard the skin and take the meat off the bones. Add 2 cups of chopped chicken to the soup before serving; use the remaining chicken for other recipes.