Anna Mae Clark, of Clark Dahlia Gardens and Greenhouses and one of the Saratoga Farmers’ Market jam makers, has seen farming come full circle.  She spent her childhood years on the family farm in Ballston Spa. She’s among a handful of second-generation vendors at the Saratoga Farmers’ Market, with her parents Harry and Lucy Bliss having been there as long as thirty years ago.

“I started making jams as a ten-year-old,” she remembers. “Mom and my grandmother made jam. When you’re on a farm you make use of everything that’s there.” They raised pigs and cattle for meat, rendered the lard, had a garden. “Going to the store wasn’t an absolute necessity, unless it was to buy what you needed to make something else.” Her grandfather, William Bliss, operated the first cider mill in the area, and even processed cider for come of the earliest Saratoga Market vendors.

“In the past, there used to be more connection between the farmer and the customer,” Anna Mae said. As the circle has closed, she now sees more and more customers come to the Market seeking authentic foods that are not mass-produced but which are sold by the person who made the product. Aside from customers wanting to buy from the producer, she feels her jams are popular because she uses cane sugar not corn syrup. “Cane sugar allows the flavor of the fruit to come through.”

Her venture into making jams in quantity began when she needed to solve a problem. “I had a freezer full of fruit, and had to use it, so I made jams.” As the popularity of her products grew, Anna Mae and her husband Ken added more and more fruit trees and small fruits to their property.

Today they’ve planted enough that seventy-five to eighty percent of their jams contain their own fruit. “When I need extra fruit,” she said, “I buy from other New York farmers, except for oranges and cranberries.” 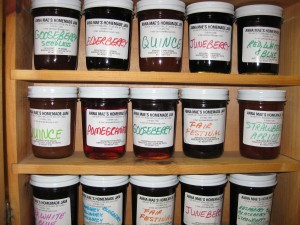 One of her newer products is a jam made from paw-paw fruit, which she obtains from another farmer in Saratoga County. The paw paw has been in this area for a long time, according to Anna Mae. “Native Americans used it as a food source before Europeans settled the area.” Thomas Jefferson is said to have valued the paw paw.

Given that her family has been in Saratoga County for several generations, it’s not surprising that Anna Mae is interested in the history of the area. The store at the Saratoga Battlefield also carried her jams, but all must be from fruits that were grown in this area before 1775. These include sour cherry, quince, currant and rhubarb.

With the short rhubarb season upon us, Anna Mae is featuring rhubarb jams at the Market. However, because her own plants aren’t yet ready for harvest, she’s using up the rhubarb she picked last spring and stored in her freezer. We can probably see strawberry-rhubarb jam soon, because every year she freezes at least 300 quarts of strawberries, or uses the fresh fruit from the garden.

Sour cherry jam is the most popular on Anna Mae’s menu of jams. They have several trees on their farm, among a total of thirty fruit trees. Anna Mae has generously shared her recipe.

Pit and chop the cherries; place in large sauce pan; bring to boil.

Add the pectin, bring the pot to a boil again, and cook for one minute.

Add the sugar, heat to the boiling point, and boil for one minute.

Remove from the burner, pour into sterilized jars, and seal with covers.

Allow to cool 24 hours before eating, so the jam can set.