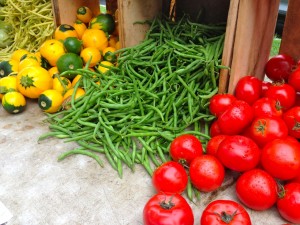 Although Jim Stannard was raised on a dairy farm, you might just say it was his destiny to end up growing fruits and vegetables, for which his namesake farm is known. It was roughly two decades ago that he began farming produce, while studying agricultural engineering at SUNY Cobleskill. There, he met his wife, Melissa, whose family had a produce farm in New Paltz, New York. “I worked for my wife’s cousin for a couple years, and I liked it,” Jim recalls.

From there, Stannard Farm was born. Started in the winter of 1995 in South Cambridge, the farm began as a family operation, and has been one ever since. The Stannards rent and own a total of 150 acres, on which they farm all sorts of produce, from vegetable crops to tree fruits like plums, cherries, nectarines, and apples, which are Jim’s favorite fruit to farm.

“I do like growing apples. It’s very rewarding, but it’s one of those crops you start preparing for a year ahead of time. You’re out in the middle of the winter, pruning, doing several different practices, but we really don’t harvest until Labor Day,” he says. “It’s all worth it when you can get a crop to come through and get it to the market.” 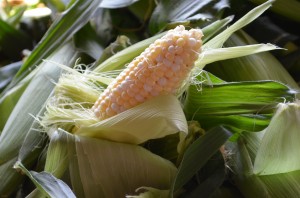 While Jim is a fan of “tooling around with tree fruit,” he remarks that his summer specialties have been customer favorites. “Sweet corn’s always a big hit, and we do sell a lot of tomatoes,” he says, adding that he’s been picking corn for the past 10 days, and expects to have his peak tomato crop from late July through early August.

In addition to the farm’s set-up at the Saratoga Farmers’ Market on Wednesdays and Saturdays (in the north pavilion, next to the sidewalk), Stannard also sells at a roadside stand on Route 22 in Cambridge, and vends Sundays and Thursdays at the New York City GreenMarket, too, at the markets in the East Village, Columbia University, and 92nd Street-1st Avenue.

Stannard also sells wholesale to restaurants and schools, both upstate and downstate. Newest to Stannard’s intra-state operations is the farm’s 26-week CSA  (community-supported agriculture) program, which runs June 1st through Thanksgiving, and is available to customers in both Saratoga and Manhattan as a fruit, vegetable or egg share.

salt and pepper to taste

After chopping tomatoes, put in colander over sink or bowl, and gently press tomatoes with back of a spoon, to remove excess juice. Combine all ingredients and let stand for 30 minutes or more to blend flavors. (If a mild salsa is desired, omit jalapeno pepper.)

Stir before serving with tortilla chips as a snack, or as a condiment for grilled meat, fish, or rice and beans.

*Ingredients can be purchased at Saratoga Farmers’ Market.