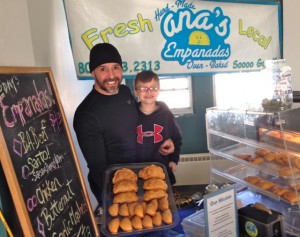 From “Garlic Mashed” to “Chorizo y Cheddar”, the many flavors of Ana’s Empanadas have attracted a large fan base for this Saratoga Farmers’ Market food vendor.

An empanada is a stuffed pastry, similar to a turnover. It is made by folding a circle of dough around a filling of spiced meat, vegetables, and/or cheese, so that the finished product forms a crescent, with the edges crimped by hand or sealed with the tines of a fork. Ana’s empanadas are baked, not fried, and served warm.

“Empanadas are popular snacks with anyone on the go, since they deliver a tasty meal in handheld package,” notes Robert DiTursi, who together with his wife, Ana, runs the business.

Ana’s Empanadas has drawn a loyal following during the last two summer seasons, prompting its decision to sign on for some of the winter months at Lincoln Baths in the Saratoga Spa State Park. (Ana’s Empanadas is on the second floor, in the back room, along with other hot food vendors. There’s also room to sit down and enjoy your food while listening to the live music.)

“We’re looking forward to being in Saratoga through the December holiday season. Then, from January through March, we’ll be focusing on baking empanadas for the skiers and snowboarders at Killington, in Vermont. In April, we’ll return to Saratoga on Saturdays.

Ana DiTursi began making empanadas, a tradition from her Argentine heritage, in her home kitchen in 2008 and selling them at the Rutland farmers’ market. The DiTursis quickly discovered that the empanadas were a hit, since they are easy to eat on the move. The business expanded to a commercial location where it now makes thousands of empanadas each week.

The many flavors of the empanadas are marked with distinct symbols, looking similar to a cattle brand. Sweet Onion includes caramelized onions, aged Cheddar, and spices, and is marked with a teardrop symbol, while Buenos Aires Beef (an Argentinian classic), has local beef, olives, peppers, onions, raisins, and spices, distinguished by a diamond mark.

In addition to empanadas, Ana’s stand also sells chimichurri sauce, a blend of parsley, garlic, and spices. The sauce is delicious on empanadas, as a condiment for grilled meats, or on hearty dishes such as Huevos Rancheros or rice and black beans.

“Traditionally, in Argentina, empanadas are often eaten as appetizers or at parties. We’re happy we can share a bit of Argentinian culture with customers at Saratoga Farmers’ Market. It will be interesting to see what the most favorite flavors are over the next several months. So far, the Chicken and Cheese and our weekly “market veggie” empanada, which uses the best of what is fresh from local farms, are our top sellers,” says Rob DiTursi.

Swiss chard is a versatile green. This simple recipe takes advantage of its autumn abundance and delicious flavor. Rainbow chard makes this empanada as colorful as it is delicious!

NOTE: Empanada dough (“discos”) can be purchased in packages of one dozen from Ana’s Empanadas at the Saratoga Farmers’ Market, as can other items marked with an asterisk.

1/2 lb mozzarella or another mild cheese*

In a large sauté pan, cook the onion in the olive oil until translucent. Add the bell pepper and seasonings. Sauté until the heat returns and everything is sizzling.

Add the Swiss chard and mix everything together. Cover and let cook over low heat until the chard is soft (about 10 minutes).

Transfer the mixture to a colander, placed over the sink or a bowl, to allow liquid to drain out. It is important that the filling is not too juicy, or it will make assembling the empanadas difficult. Let it cool for several minutes.

Once the mixture is cooled and strained, mix in the chopped egg and cheese.

Arrange the dough circles on a clean table and using a small ice-cream scoop, tablespoon or similar utensil, scoop out the filling onto the center of the disco.

Pick up the disco with both hands, stretching outward slightly as you lift and pinch the sides together so that you get a nice stuffed half-moon shape.

Be careful not to get any of the filling into the seam you are making; if you do, the empanada will not stay closed.

To finish assembly, put the empanada on the table and using a fork, go over the seam you made.

Arrange finished empanadas on a lightly greased tray and bake at 450 degrees for approximately 8 minutes or until the empanadas are golden brown and puffy.