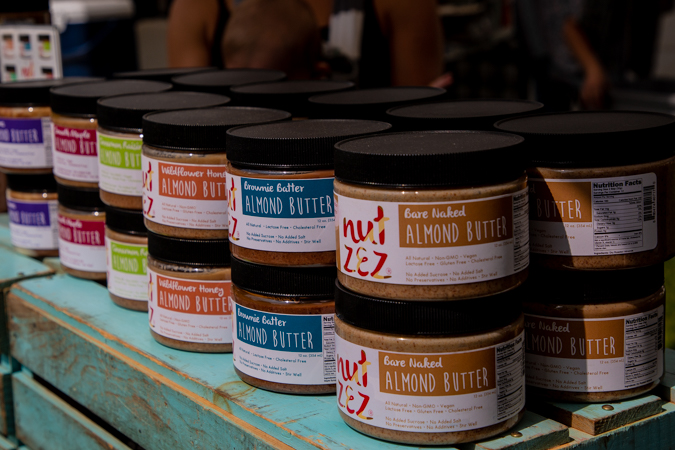 Balance. That is what Amanda Zezima emphasizes about her current life.

Zezima is the owner of Nut Zez, a new vendor at the Saratoga Farmers’ Market this year. Zezima is a school psychologist, personal trainer, former body building, wife, mother, and entrepreneur. She spoke with me at the market while holding her six-month-old son Raphael.

“We all have the same hours in a day,” she says. “It is how we choose to use those hours.”

Zezima has chosen to take care of her health, spend time with her family, and promote health for other people. Nut Zez has been a creative avenue for her to do so.

Zezima was diagnosed with type 1 diabetes at age three. She grew up seeking healthy foods and found that the healthy fats in nuts helped her stabilize her blood sugar level.

She could not find a nut butter product in stores, however, that was free of added sugars, salts, oils, or preservatives. She began making almond butter in her humble home kitchen, experimenting with different flavors. She brought her creations to her personal training clients, who encouraged her to start offering them for sale.

Zezima sells her almond butters to her clients, at gyms and at area farmers’ markets. She recently began online sales.

Many different nut butters exist on the market. All must comply with federal Food & Drug Act rules regarding processing, which strips foods of some naturally occurring nutrients. Zezima uses almonds sourced from a California grower that have undergone the lowest form of processing allowable. She makes her butters in a peanut-free facility and uses ingredients with no cross contamination in consideration of those with peanut allergies.

For Zezima, family life is paramount. She chose to join the Saratoga Farmers’ Market for that reason. She used to sell at a Sunday market but “after Raf was born, we chose Sundays to be family days.”

Look for Zezima on Saturdays at the north end of the Saratoga Farmers’ Market.