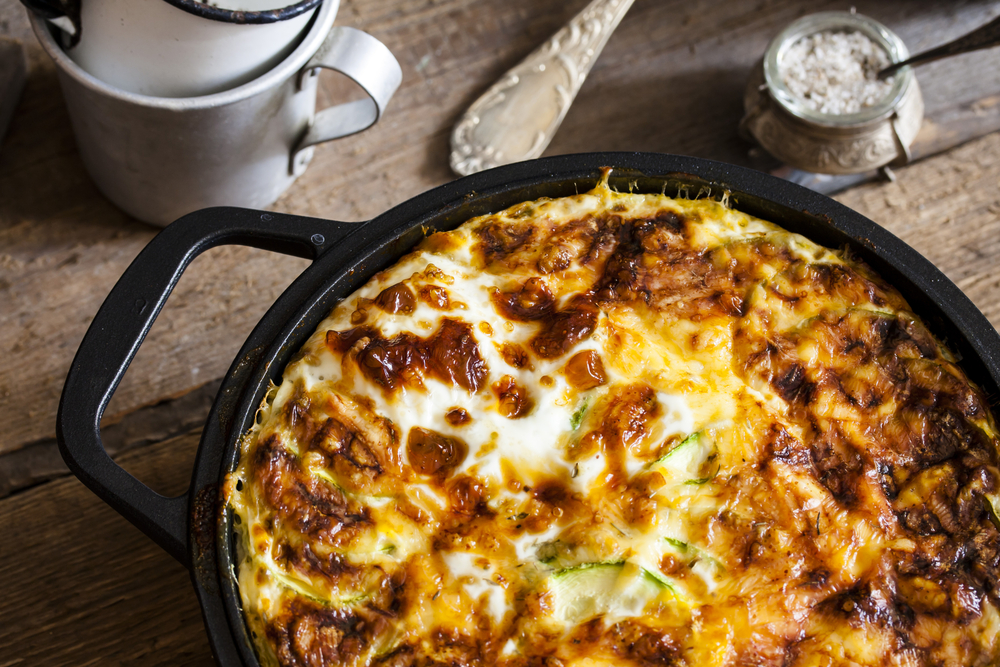 Instructions
1. Heat oven to 500 degrees. Spread croissants on a large baking sheet and toast, cut side up, until golden brown, 5 to 10 minutes (watch carefully to see that they do not burn). Let cool, then tear into large bite-size pieces.
2. In a medium skillet over medium-high heat, warm the olive oil. Add sliced scallions and sausage meat; cook, breaking up meat with a fork until mixture is well browned, about 5 minutes. Stir in sage, and remove from heat.
3. In a large bowl, toss together croissants and sausage mixture. In a separate bowl, whisk together eggs, milk, cream, 1 1/2 cups cheese, salt and pepper.
4. Lightly oil a 9- x 13-inch baking dish. Turn croissant mixture into the pan, spreading it out evenly over the bottom. Pour custard into pan, pressing croissants down gently to help absorb the liquid. Cover pan with plastic wrap and refrigerate at least 4 hours or overnight.
5. When you’re ready to bake the casserole, heat oven to 350 degrees. Scatter the remaining grated cheese over the top of the casserole. Transfer to oven and bake until casserole is golden brown and firm to the touch, 45 minutes. Let stand 10 minutes. Garnish with sliced scallion tops before serving. 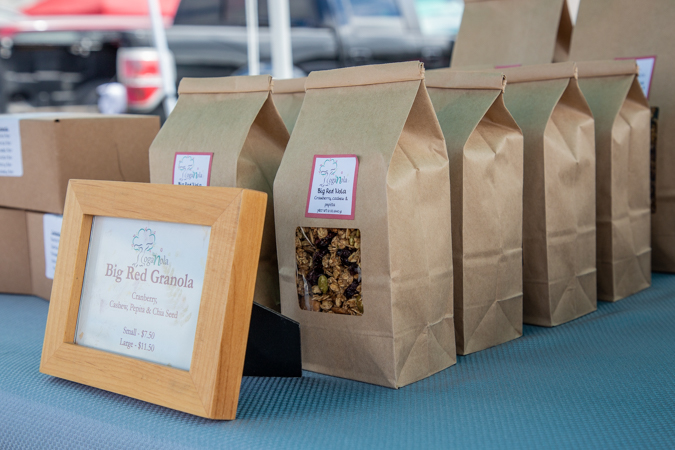 In 2015, Katie Rhodes began training for her first marathon. Constantly hungry from her busy schedule, granola bars became her go-to snack until she took a closer look at the ingredients she was putting in her body. Most traditional granola bars are highly processed and packed with sugar. Looking to keep herself both full and healthy for her training, Katie decided to make her own granola bar using healthier ingredients and the Charlie Bar was born: a dark chocolate, apricot, and almond bar. Not long after, friends and coworkers began placing orders for bars and the personal venture became a business: TogaNola was formed. “With a mission to provide clean energy for everyone who aspires to be a better version of themselves,” says Rhodes.

In the past 6 years, TogaNola has expanded its range beyond its now 5 flavors of granola bars, adding granola clusters and “protein bombs” in a variety of flavors, like Maple Almond Butter and Blueberry & Ginger Sunflower Seed. All TogaNola products are free of gluten, dairy, and soy, and several flavors are vegan, so there are many options to accommodate dietary restrictions of all types. The business is committed to using locally sourced ingredients, compostable packaging, natural sweeteners (such as local honey and maple syrup), and small-batch baking.

Whether it’s a hike on a warm summer morning or skiing on a cold winter day, granola is the perfect snack for all types of adventures. Rhodes can attest to that herself: TogaNola granola bars and clusters have accompanied Katie on countless trips including a single season round of the 46 High Peaks last winter. “The bars are hearty and easily transported in a mess free package. They don’t freeze solid, even in the freezing winter temperatures in the Adirondacks, which is crucial to support Katie on her big hikes,” says husband and co-owner Ken Rhodes.

TogaNola got its start selling at local farmers’ markets and has recently expanded to include an online store and partnerships with local businesses. Katie and Ken are excited to be joining the Saratoga Farmers’ Market as an opportunity to interact directly with their customers and meet other local vendors.

TogaNola’s next adventure? Handmade, locally sourced dehydrated meals to fuel trips that span multiple days. Keep an eye out for this new product later this year at the farmers’ market, and stay full and fueled with TogaNola’s granola bars, clusters, and protein bombs, available every Saturday at the Saratoga Farmers’ Market. 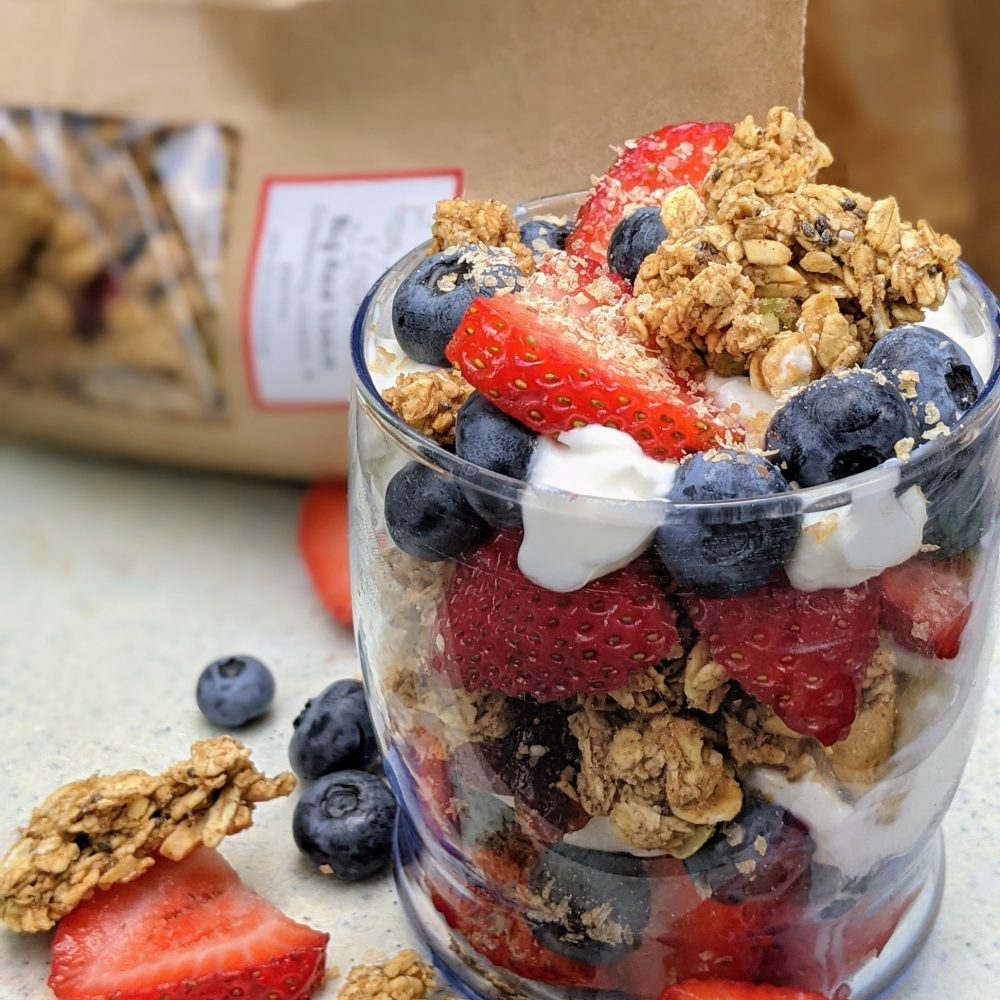 Instructions
Layer 1/4 cup strawberries, 1/4 cup blueberries, 1/3 container yogurt, 1/3 tablespoon wheat germ, 1/3 of the sliced banana, and about 2 tablespoons of granola in a large bowl. Continue to build the parfait, repeating the layers until all of the ingredients are used completely. Enjoy! 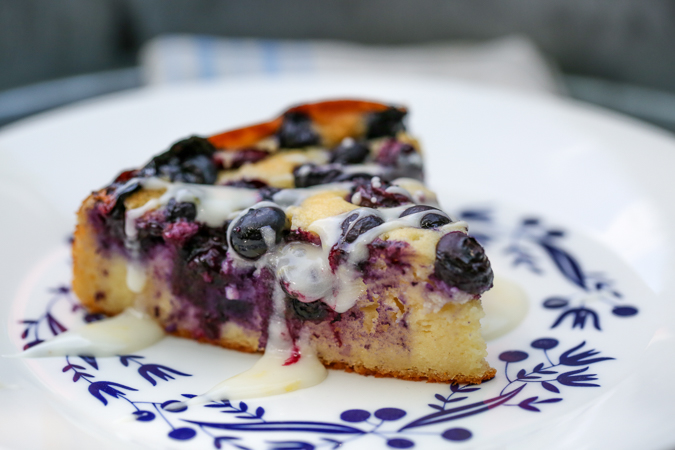 Adapted from the recipe by King Arthur Flour, shared by My Saratoga Kitchen Table
Serves: 8 to 10

Cake:
1. Preheat the oven to 350 degrees. Lightly grease an 8-inch round cake pan that is at least 2 inches deep.
2. Beat together the eggs and sugar until smooth.
3. Add the butter, cottage (or ricotta cheese), yogurt, and vanilla to the eggs mixture. Beat until well combined.
4. Add the flour, salt, and baking powder, to the egg/cheese mixture stirring to combine.
5. Pour the batter into the prepared pan and scatter the blueberries evenly over the top.
6. Bake the cake for about 50 minutes, until the tester inserted into the cake comes out clean.
7. Remove the cake from the oven. Let it rest at room temperature for 30 minutes to firm. 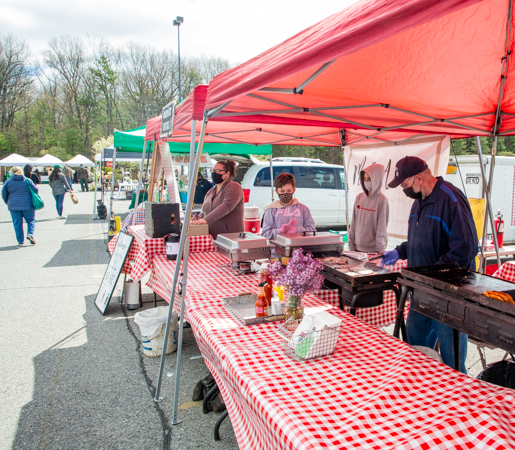 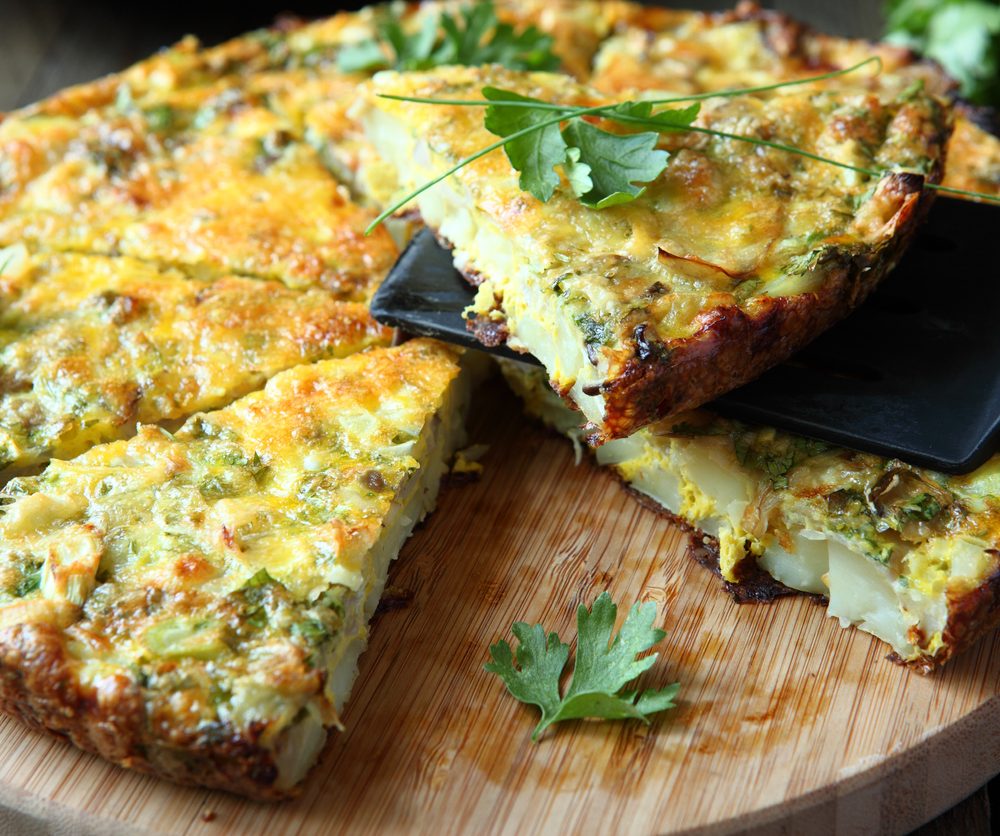 Instructions
1. Preheat broiler and place top rack 4-5” from the element. Whisk together the eggs, egg whites, milk, ¼ tsp salt, and a pinch of pepper and set aside.
2. On the stove top, melt butter over medium-high heat in an iron skillet. Add vegetables and saute until they begin to soften for about 3-4 minutes. Add in the bacon, thyme, half of the parsley, 1/4 tsp salt, a pinch of pepper, and cook stirring 1 more minute.
3. Pour the egg mixture over the veggies and stir to evenly spread the veggies around. Let it cook, about 3-4 minutes. Remove skillet from heat and sprinkle cheese over the top.
4. Place skillet under the broiler until eggs are slightly puffed and cheese begins to bubble and brown, 3-4 minutes. Watch carefully. Remove from the oven, slide frittata onto a serving platter. Garnish with remaining parsley. Slice and serve.