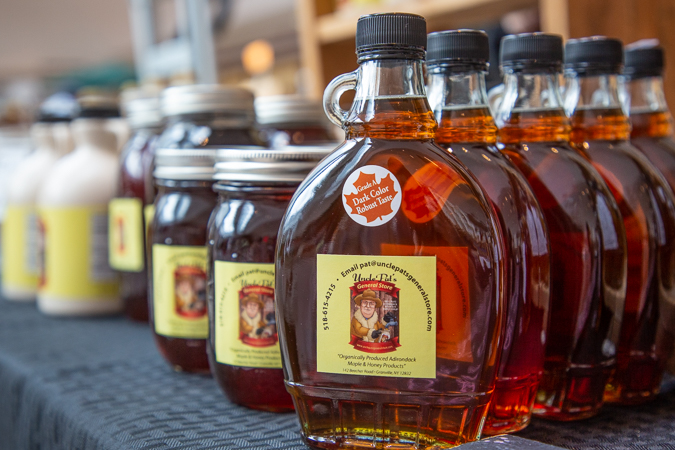 The New York State Plastic Bag Ban, which was implemented on March 1 under the Plastic Waste Reduction Law, continues the effort to reduce plastic waste introduced into the environment.  Plastic grocery bags are no longer available, and consumers are encouraged to bring their own reusable bags for shopping.  For Gina Willis of Slate Valley Farms, post-consumer waste has been a hot topic with her maple and honey production.

Willis sells maple in 16 and 32 ounce glass jars in addition to the standard plastic jugs of maple syrup. This reusable, zero-waste packaging works on a closed-loop system: customers put down a 50 cent deposit on their jars and when they bring them back, they can either get their 50 cents back or put it towards their next purchase.  Willis cleans the jars by boiling and sanitizing them in her autoclave machine.  She explains that her great grandmother also packaged syrup this way when she ran the family farm.  The packaging started as glass jars and switched to ceramic jugs, tins (which Willis still sells as a novelty product), and then plastic.

As I was talking to Willis at the Market, Julia, a customer of Slate Valley Farm stopped by to return her glass jar, calling choosing glass over plastic “the intuitive choice.” She chooses jars as they are reusable, recyclable, and she uses them to store granola at home before returning them.

Willis has noticed a shift among her consumers, who are more concerned about their plastic use.  By giving them the chance to purchase a zero waste product, it’s win-win for her and the consumer.

Given the effect of our changing climate on her operation, Willis explains that “things have definitely changed” over the course of her life. The sugaring season used to start in March and run through April.  Now, the warmer season comes early and she can see the difference as early as January.  A long spring is necessary for a successful harvest, as temperatures must be freezing at night and above freezing during the day for the sap to run.  A maple season, which used to be about eight weeks long, can now be as short as three or four weeks.  “You need spring!” she emphasizes.

For Willis, sugaring is ultimately getting more expensive in addition to the climate-related difficulties.  “It’s testing me,” she explains, but adds enthusiastically that “I’ll always do this.”