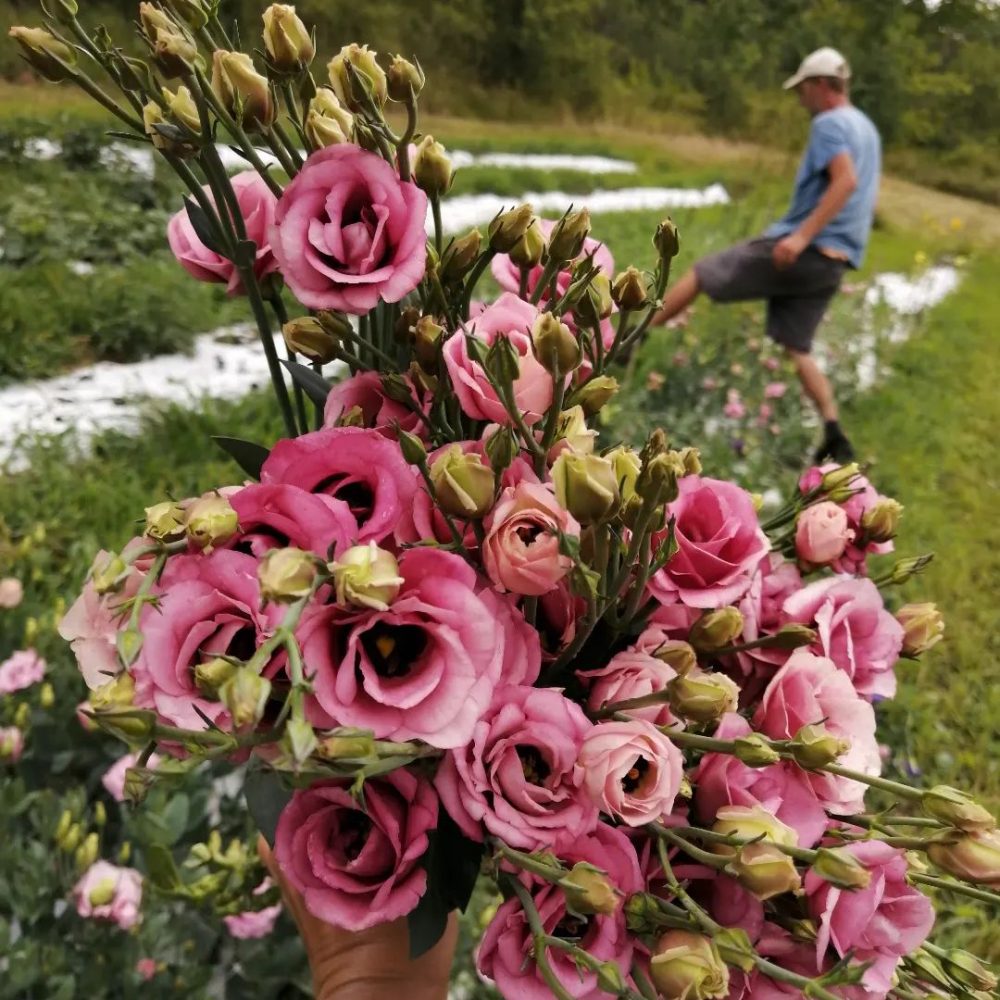 From amaranth to zinnias, local farmers are growing various seasonal flowers and creating exquisite bouquets that represent the rhythm of the seasons from early spring to late fall.

At the Saratoga Farmers’ Market, flowers and mixed flower arrangements of brilliant sunflower faces, elegant snapdragons, dahlias, and lisianthus, just to name a few, adorn tables in buckets and vases every Wednesday and Saturday. Their petals and colors summon the attention of market-goers.

“I am super passionate about flowers, and I enjoy talking with customers and educating them about different varieties we grow,” says Amy Hoge, owner of Bark Hill Farm in Hebron.

Bark Hill is one of several farms offering fresh-cut flowers at the farmers’ market this season. “I am trying to have flowers available as long as possible, seeding flowers in January and over-wintering flowers so that they begin growing even earlier,” explains Hoge.

At Old Tavern Farm in Saratoga Springs, Walt Borisenok and his staff work tirelessly at succession planting native plants, starting seeds in winter. This continual planting of flowers ensures that seasonal blooms are consistent for their bouquets.

Corinne Hansch owns Lovin’ Mama Farm, a certified organic farm in Amsterdam. Hansch attests to the process and rewards of growing flowers throughout the seasons. “Local flowers are the best because they represent so completely the season that we are in. Our fresh flower season begins in April with thousands of tulips grown in our unheated tunnels.”

At Bark Hill, Amy Hoge describes the delicate nature of flowers and how some flowers have a shorter vase life than other varieties shipped to stores, sometimes traveling from other countries.

Ryan Holub of Scotch Ridge Flower Farm in Duanesburg shares another key aspect of locally grown flowers. “We cut our flowers a day before the farmers’ market, so they are truly fresh and long-lasting. They have no carbon footprint.”

Other local flower farmers echo the “freshly cut” fact, and there are also tips to extending the vase-life of flower bouquets. Walt Borisenok of Old Tavern Farm recommends changing the water daily and trimming the stem bottoms with clean scissors or pruning shears.

It’s also important to note that some flowers have a longer vase life than others. For example, according to Ryan Holub of Scotch Ridge, lisianthus and marigolds live longer than dahlias.

Another notable aspect of locally grown flowers includes the positive effects that plant diversity has on a garden ecosystem. Lovin’ Mama Farm experiences this first-hand as they grow diverse flowers and herbs throughout their fields to create a habitat for beneficial insects.

“It is such an honor to be a local florist,” says Hansch of Lovin’ Mama Farm. “I feel a deeper connection to my customers and community when I provide flowers for their special occasions.”

The Saratoga Farmers’ Market is open Saturdays from 9 a.m. to 1 p.m. and Wednesdays from 3 to 6 p.m. at High Rock Park. Find us online at www.saratogafarmersmarket.org and follow us on Facebook and Instagram.