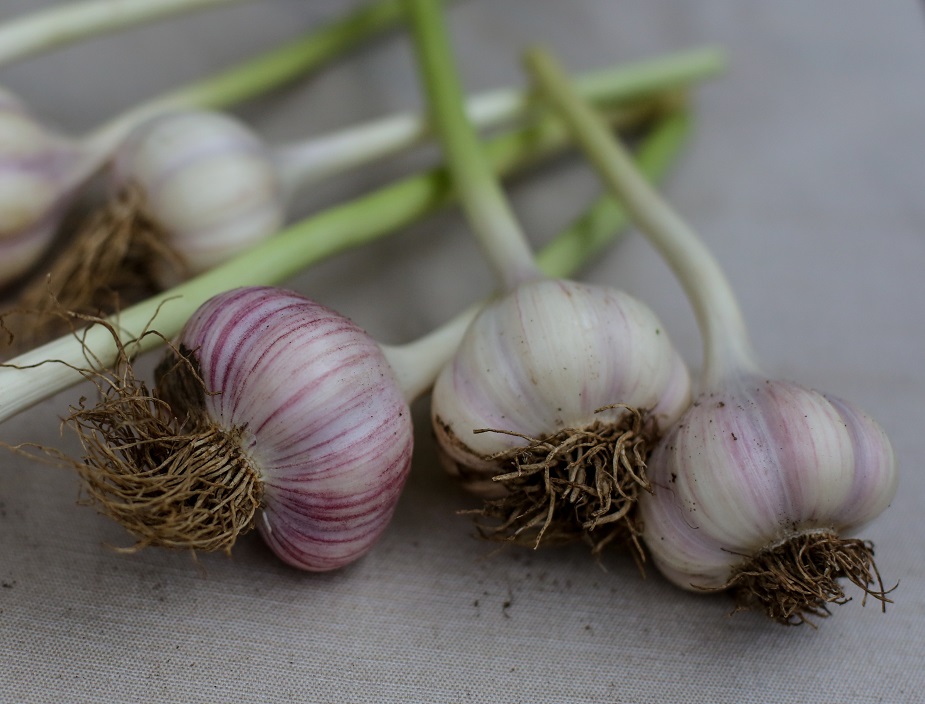 My husband Jim and I love garlic. Not just the sight, smell, and taste of the bulbs, which are at their peak season now at the Saratoga Farmers’ Market, but everything about the planting, tending, and harvesting of it.

We began growing garlic seven years ago, well before our backyard land became Squashville Farm. We started with cloves we got from the Row to Hoe Farm. The following year, we purchased garlic in bulk and began saving seed. By 2015, we were harvesting about 600 bulbs a year.

During those years, we also helped form the Friends of the Saratoga Market volunteer organization. In that capacity, we got to know local farmers, learned more about growing food, grew an increasing variety of vegetables, and began raising laying hens, meat chickens, and goats.

This spring, we became vendors at Saratoga’s Wednesday market. At our stall, just past the central pavilion on the north end, you will find lettuce, kale, chard, and other greens; a range of seasonal vegetables; eggs, chicken, and several cuts of goat meat. And, of course, garlic. This is the food we grow to eat and enjoy offering to others.

Garlic comes in numerous varieties, and we like to sample a lot of them. We do this by traveling to the Hudson Valley Garlic Festival in Saugerties, where we meet growers and taste their wares. We decide what to plant based on what our taste buds like.

This year, we chose three varieties, one from each of the “hard neck” families. Our Red Chesnok is a purple stripe, great for baking and eating roasted; our Georgian Heat is a porcelain, great for general cooking and longer-term storage; and our Ukrainian Red is a rocambole, known for having a lot of cloves in varying sizes and a true garlic taste.

We planted cloves in November. They sprouted in the spring. The sprouts turned into stalks that produced scapes in June, which we cut off and sold. The stalks then turned brown, telling us it was time to harvest.

As my husband notes, garlic is magical. It’s a year-round anticipation, planning, and celebration of farm-grown food.

This Saturday will be a great one: Owl Wood Farm's

We are moving outside this week! We couldn't bear