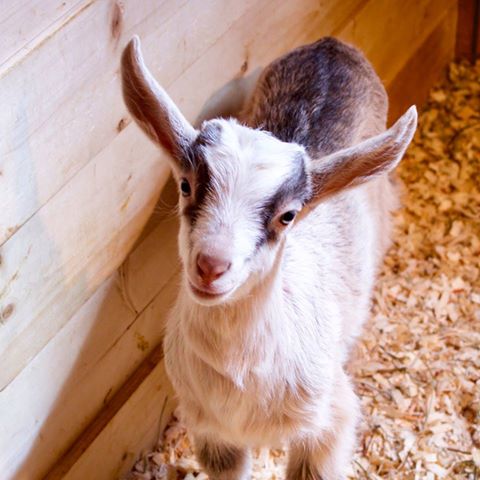 Our goat Tory went into labor Sunday afternoon. My husband Jim Gupta-Carlson, who had been keeping watch overnight, was ready with his “kidding kit”: sterile gloves and lubricant; towels to help dry the kids; iodine for cleaning; and molasses in warm water as a treat for the new mother.

Goats most often give birth to twins. The kids usually arrive one a time. Tory’s nearly tumbled out together. Jim donned gloves, applied lubricant, and helped Tory deliver her kids, one by one.

Within an hour, the kids were standing and suckling at Tory’s udders. Spring is the season of babies for Saratoga Farmers’ Market vendors who raise animals. At Nettle Meadow, Moxie Ridge, Lewis Waite, Mariaville Mushroom Men, Squashville, and other farms, chicks, ducklings, and goslings are chirping; lambs and kids are prancing about; and soon piglets and calves will appear in woods and pastures.

In ideal circumstances, the animals birth on their own. But when complications arise farmers help.

At Elihu Farm, 70 ewes are giving birth this spring. One ewe had been in labor for a long time, so Bob and Mary Pratt intervened. Bob held the animal’s head, and Mary found that one lamb was in a breech position. She straightened the legs and pulled it out. A second one followed. Thanks to the intervention both lambs and their mother are doing fine.

At Longlesson Farm, Christophe Robert is looking forward to 35-40 calves in late June. The cows give birth outdoors, and by the end of the day, the calves are running around their mothers, sniffing curiously, shaking their limbs.

“I never tire of watching them,” Robert says. “All that energy.”

Once, he found a calf that had lost its mother lying alone. He carried it indoors to warm it up, and his family fed it with a bottle until it could survive on its own.

At Ramble Creek Farm, Ann and Josh Carnes are preparing for piglets. Last year, Ann recalls, the sows created shelters in bushes as their deliveries drew near. Josh camped out with them in the woods, prepared to help if necessary. But the sows birthed on their own.