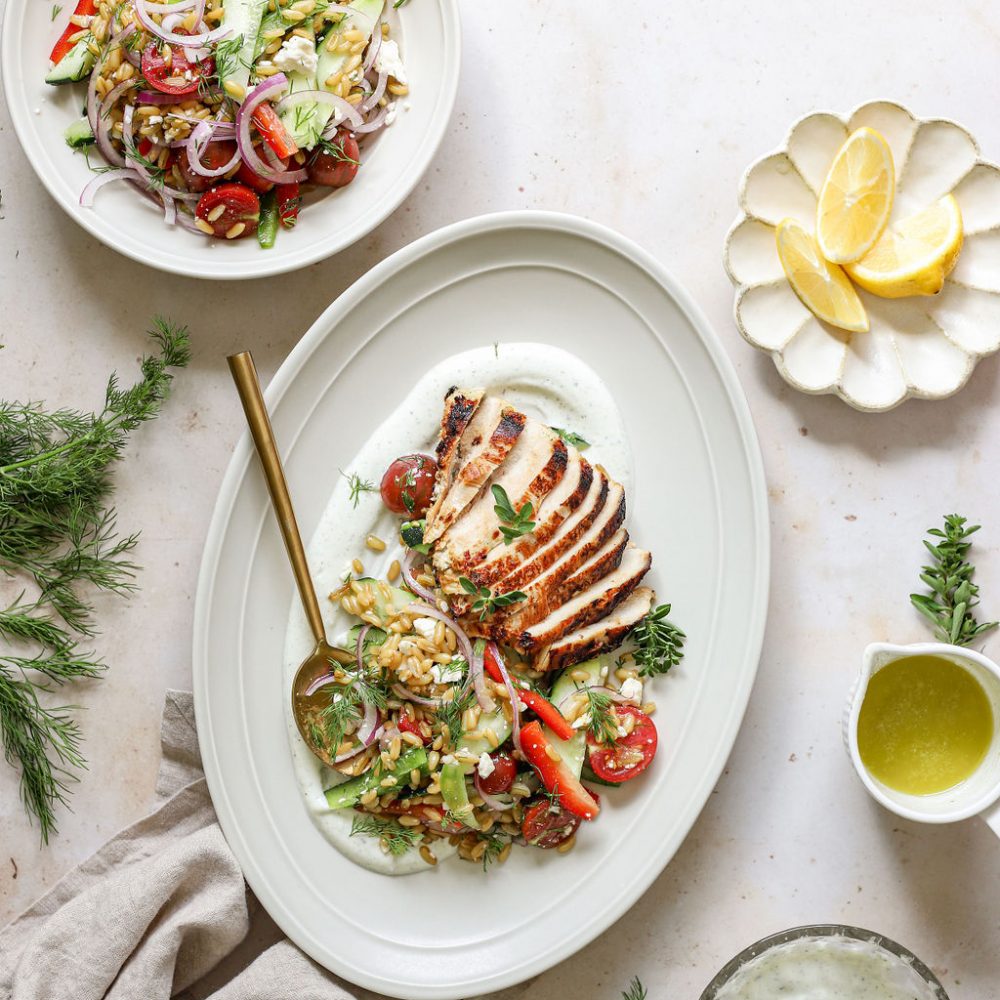 Recipe by Marisa Kerkvliet of lemonthymekitchen.com

1-pint cherry tomatoes*, cut in half 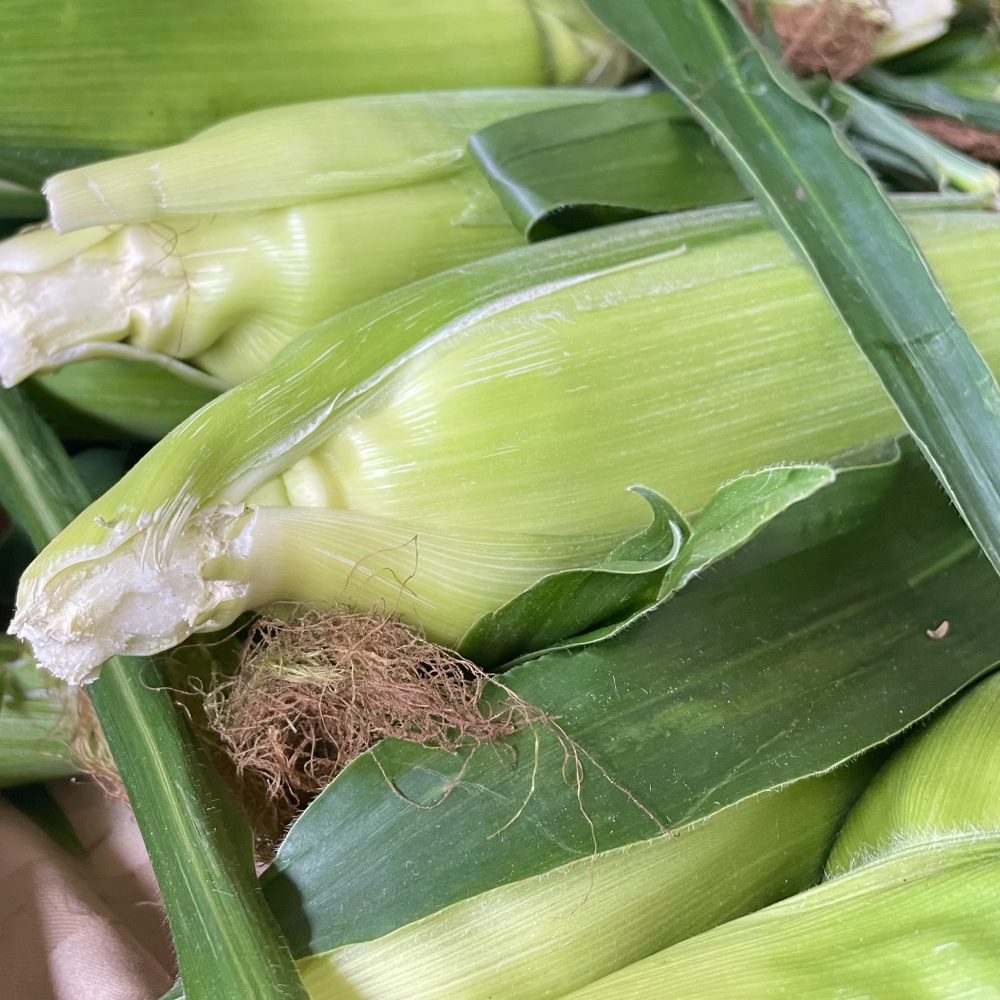 With the recent heat we have patiently been enduring, the last thing most people want to eat is hot food like soup. However, aside from being able to cook with all the delicious in-season fruits and veggies this season has to offer, enjoying a hot, spicy soup, like Mexican street corn soup, offers many practical health benefits.

According to research, eating hot foods like soup in warm weather can benefit your body by cooling you even more than cold foods. Interesting, right? Eating hot food increases your body’s internal temperature, which causes you to sweat more. When your sweat naturally evaporates, your body becomes cooler than before. This effect is even more noticeable when eating a spicy soup, as spicy foods like peppers can cause you to sweat, making your body cooler.

For this reason, hot soups like Mexican street corn soup are perfect for the heat. Not only is it super tasty, but you can enhance its flavor by using fresh, locally grown ingredients like peppers, cilantro, garlic, and onions from the farmers’ market. 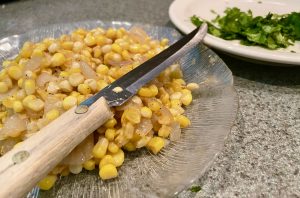 For this soup, the real spotlight is on fresh corn, and Gomez Veggie Ville has a plentiful supply this season. Their farming practices ensure that their corn is sweet and grown without using GMOs or harmful chemicals. So, whether you make street corn soup or use it in other seasonal dishes like grilled corn on the cob or a fresh summer salad, you’ll know that your food is grown with care and comes from a good place.

Is corn not your thing? Plenty of other delicious in-season fruits and veggies are perfect for soup-making. Grab some soup supplies at the farmers’ market on Wednesdays or Saturdays. The market has plenty of watermelons, eggplants, zucchini, carrots, mushrooms, potatoes, peas, peppers, zucchini, tomatoes, squash, cucumbers, and many more summertime favorites. 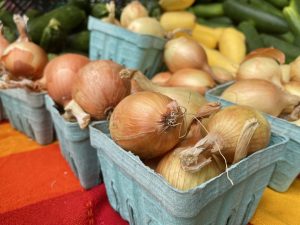 Don’t limit yourself to Mexican street corn soup either! The possibilities for soup-making are endless. Summer vegetable soup, zucchini soup, and even a creamy broccoli soup can be refreshing in the summer heat. Go ahead and raise your body temperature. Ultimately, it will cool you off!

The Saratoga Farmers’ Market is open Saturdays from 9 a.m. to 1 p.m. and Wednesdays from 3 to 6 p.m. at High Rock Park in downtown Saratoga Springs. Find us online at saratogafarmersmarket.org and follow us on Facebook and Instagram. 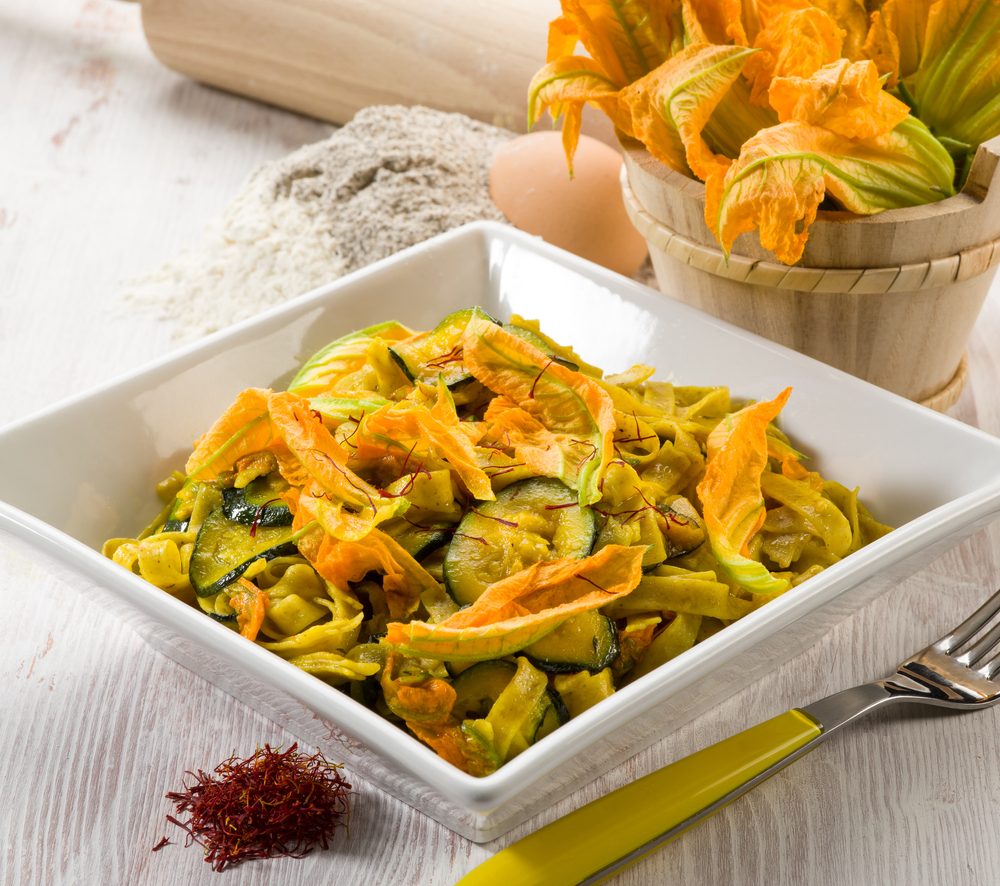 Adapted from the recipe by Jenny at Hellomydumpling.com

Bring a large pot of water to boil, salt generously, and cook the pasta to al dente. Drain and reserve about 3/4 cup of the pasta water.

In a large sautée pan, melt the butter over medium-high heat. Add the zucchini and garlic, cook for 2 minutes. Add the pasta water and pasta, and cook stirring constantly until the sauce thickens, about 2-3 minutes more. Add the cheese and lemon juice, salt (if needed), and pepper. Serve in two shallow bowls topped with the squash blossoms and more cheese. 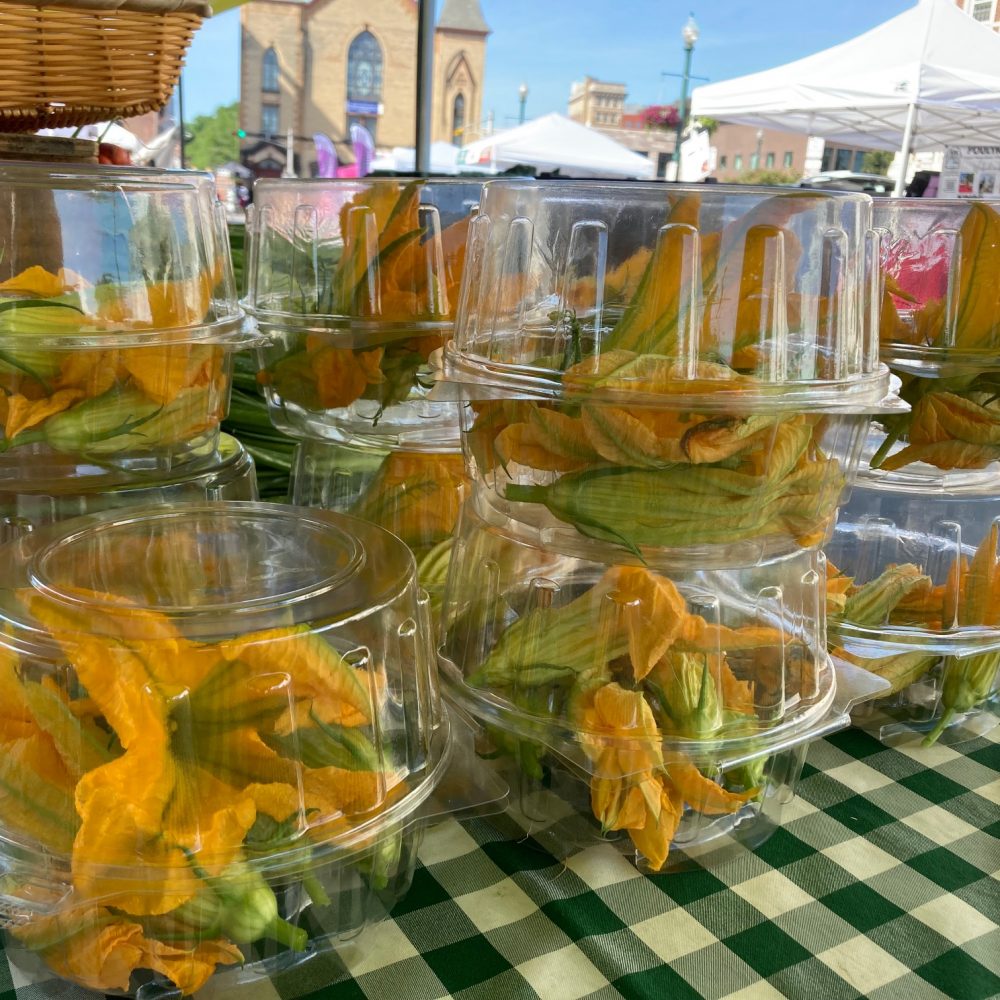 We know the jokes about zucchini: If you leave your car doors unlocked, you might come back and find your back seat filled with them.

But the flowers from zucchini and other squash plants are a different story. Brilliantly yellow, they are just as tasty and versatile as the fruits they produce.

At Leaning Birch Farm, Dan, Rose, and Nic Fera have made squash flowers a seasonal staple.

“Last year, people kept asking us about the blossoms,” says Rose. “We only had a few, and they sold so fast.”

Over the winter, Dan did some research and found a zucchini variety known for producing more male than female flowers. Flowers produce fruits but only if they are female and have been pollinated by their male counterparts. Once the pollination is done, male flowers are best picked off so the plants can focus on producing fruits.

“We ordered the seeds, and planted a row,” Rose says. “They produce flowers like crazy.”

Now clamshell boxes filled with them sit stacked at the Leaning Birch stall, along with some boxes of female flowers with baby zucchini attached. The boxes sell fast.

Rose picks zucchini flowers early each morning. The blossoms from this variety, she says, are bigger and firmer, making them much easier to cook.

“The easiest way is to dip them in a light batter and fry them,” says Rose.

Another way, says her son Nic, is to create simple ricotta cheese filling with herbs and a tempura-like batter of flour, cornstarch, and cold water. Dip the stuffed flowers in the batter and deep fry.

I tried it. The outcome was delicious – and my kitchen a mess.

“Experiment,” urges Rose. “Use your imagination.”

I mixed fresh oregano and minced garlic into the ricotta and filled the flowers. I lightly coated a baking dish with olive oil and rolled the flowers in it. They roasted in a 350F oven for about 12 minutes while I snacked on some chard I had roasted in the same dish beforehand. I arranged the blossoms over the chard and sliced up a fresh tomato. I had a meal full of color and one baking dish to clean.

Rose suggests tearing up the flowers and tossing them into salads, topping pizzas, creating a soup, scrambling them with eggs or adding them to pancake batter.

The flowers are likely to remain plentiful at the Saratoga Farmers Market for a couple more weeks.

The Saratoga Farmers’ Market is open Saturdays from 9 a.m. to 1 p.m. and Wednesdays from 3 to 6 p.m. at High Rock Park. Find us online at saratogafarmersmarket.org and follow us on Facebook and Instagram. 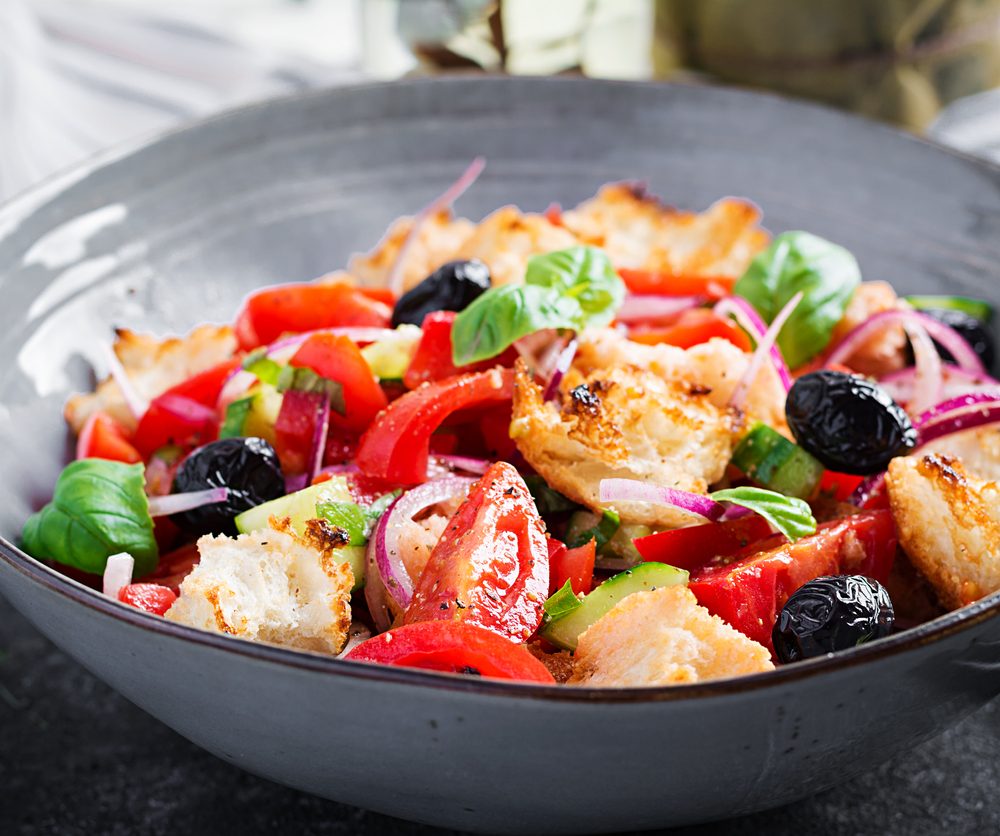 Adapted from the Easy Panzanella Salad recipe by Holly Nilsson 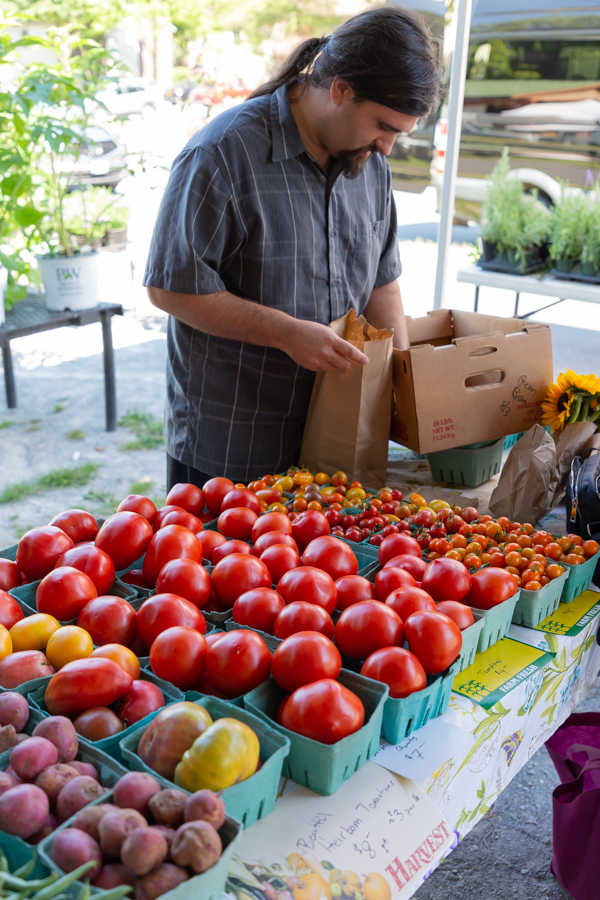 Summer is the season of abundance for fresh fruits and vegetables. However, for some, rising food prices might make this bounty harder to afford.

The Saratoga Farmers’ Market seeks to bridge that gap through several initiatives.

This summer, the market is participating in a partnership between the Capital District Physicians’ Health Plan and Greenwich-based Comfort Food Community that makes $5 vouchers available to CDPHP members for shopping at the farmers’ market. Through the program, participants in CDPHP Medicaid plans can receive up to $100 in vouchers throughout the outdoor market season. The vouchers are redeemable for food items from participating vendors at the farmers’ market. Comfort Food Community representatives distribute vouchers at the market every other Saturday.

This program supplements the market’s year-round EBT token redemption program. Through this program, customers who own an EBT (Electronic Benefits Transfer) card can exchange their SNAP benefits for farmers’ market tokens to purchase fresh foods, including fruit and vegetables, bread and baked goods, meat, fish, and poultry, dairy products, honey and maple products, and value-added foods like soup mixes, sauces, and jams and jellies. Herb plants and plants that produce food are also approved purchases with EBT coins. The market additionally offers SNAP incentive programs, such as FreshConnect, that provide extra coupons or tokens to spend, meaning customers receive more value than they spend. With FreshConnect, for every $5 a customer spends with their EBT benefits, they receive a $2 FreshConnect coupon to spend at the farmers’ market.

Vendors cannot give change for items purchased with such coupons. However, many will work with you to ensure you receive that the goods you receive are of at least an equal value to the coupons used in making the purchase.

To use FMNP coupons at the market, look for the blue poster at participating vendors’ stalls or simply stop by the market information table for a complete list of farms accepting FMNP coupons. The FMNP season runs from June through October.

The Saratoga Farmers’ Market is open Saturdays from 9 a.m. to 1 p.m. and Wednesdays from 3 to 6 p.m. at High Rock Park. Find us online at saratogafarmersmarket.org and follow us on Facebook and Instagram.