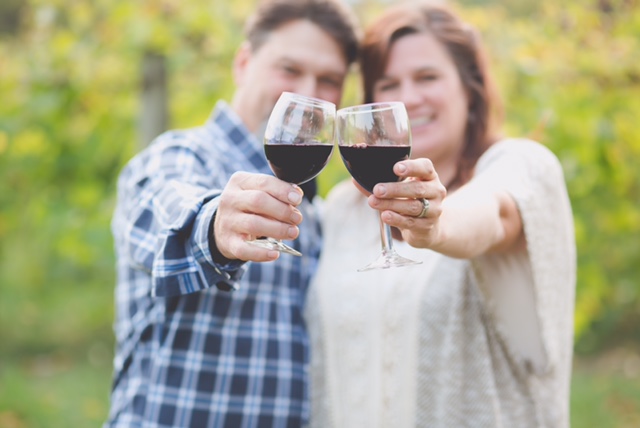 The Fossil Stone Vineyard bottles of wine almost seem to glitter on display tables at the Saratoga Farmers’ Market: The golden hue of La Crescent, the ruby glow of Marquette, the fiery dark pink of their Rose, a blend of the two.

Fossil Stone is among the market’s newest vendors, joining in late August. But for owners Michael and Kelly Spiak making wine is not new. Their journey, like much of farming, is all about having a passion and the patience to transform that passion into products.

For Michael Spiak, passion began while traveling through New Zealand with the military.

“New Zealand was blanketed with vineyards, which I had a strange fascination with,” he says. “I loved everything about them … the posts, the vines, the grapes, and of course the wine.”

He and his wife Kelly owned land in Greenfield Center. They decided in 2006 to try growing grapevines. Their first wines came from vines planted in 2009, and they began selling wine in 2014. Today, Fossil Stone consists of more than 3,000 wines and a winery barn. A tasting room is set to open next summer.

The Spiaks grow cold-hardy French hybrid grapes developed by University of Minnesota viticulturist Peter Hamstead to produce LaCrescent – a crisp white with hints of apricot – and Marquette – a smooth medium-bodied red with hints of cherry and plum. They also craft a Rose from a 30-70 blend of Marquette and LaCrescent.

“It is darker than most Roses,” says Spiak, “but don’t let that fool you. It behaves very much like a Rose.”

At Fossil Stone, winter is a time to craft wines before the growing cycle begins in late February when vines will be pruned prior to bud break in late April/early May. The grapes grow through late summer and are harvested in fall.

Fossil Stone wines pair well with many winter farmers’ market offerings, such as beef brisket. “I used to work for the Saratoga North Creek Railroad as a locomotive engineer,” Michael Spiak recalls. “The chef on board used our Marquette to make a wine reduction and poured it over a broiled brisket and then paired it with our Marquette.” 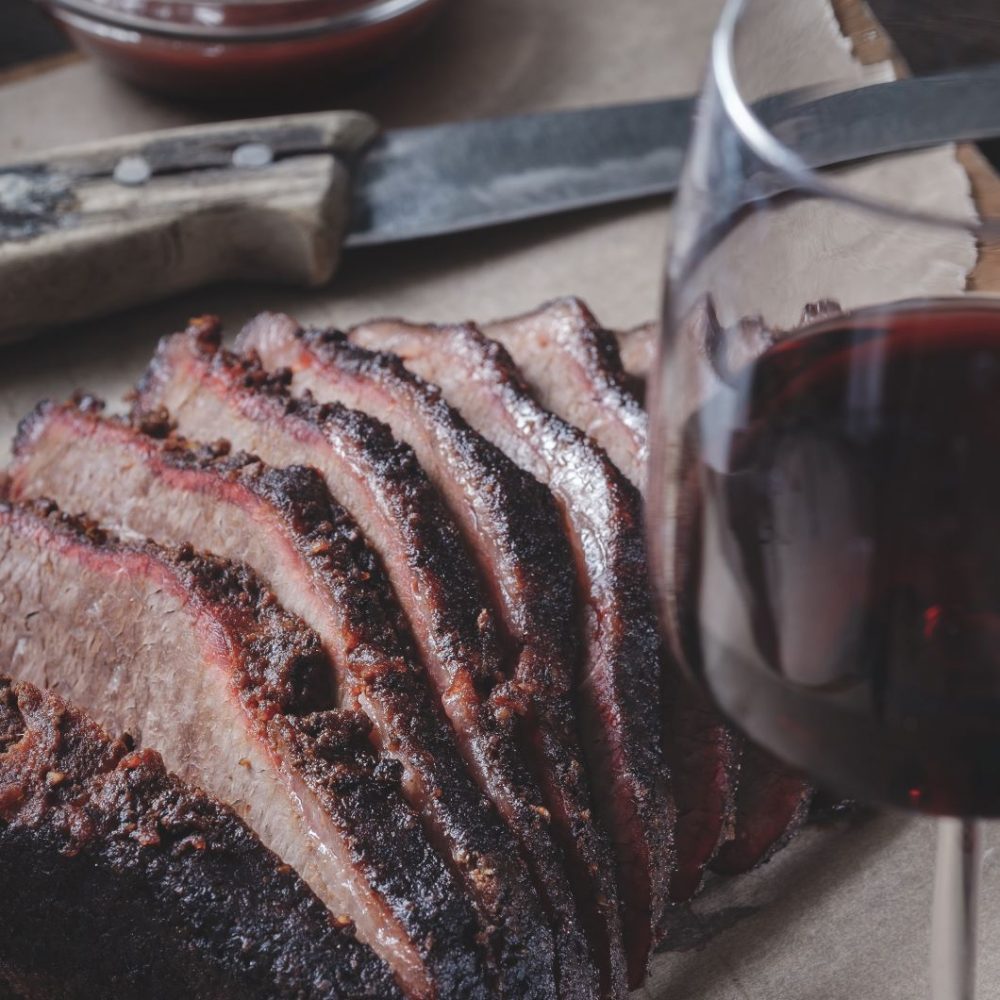 Instructions
● In a large resealable plastic bag, combine the beef brisket with the Marquette, red wine vinegar, juniper berries, white peppercorns, carrots, celery, garlic, and 1 of the onions. Close the bag, pressing out any air, and refrigerate the brisket overnight or for up to 2 days.
● Preheat the oven to 275°. Strain the marinade, discarding the solids. Pat the brisket dry. In a large enameled cast-iron casserole, heat the oil. Season the brisket with salt and pepper and cook over moderate heat until browned all over, 8 to 10 minutes. Transfer the brisket to a large plate. Add the remaining 3 onions and the 2 finely chopped apples to the casserole and cook over moderate heat, stirring frequently, until softened, about 7 minutes.
● Return the brisket to the casserole and add the raisins, bay leaf, thyme, and the strained marinade. Season with salt and pepper and bring to a simmer. Cover and braise in the oven for about 3 hours, until the meat is very tender; turn the brisket halfway through cooking.
● Carefully transfer the brisket to a plate; cover and keep warm. Strain the cooking liquid into a heatproof measuring cup, pressing down on the solids. Wipe out the casserole and add the cooking liquid and chicken stock. Boil over moderately high heat until reduced by half, about 20 minutes. Season the sauce with salt and pepper. Thinly slice the brisket across the grain and garnish with the chopped apple. Serve with the sauce and a glass of Fossil Stone’s Marquette.

Make Ahead: The brisket can be refrigerated in the sauce, whole or sliced, for up to 2 days. Rewarm in the oven. 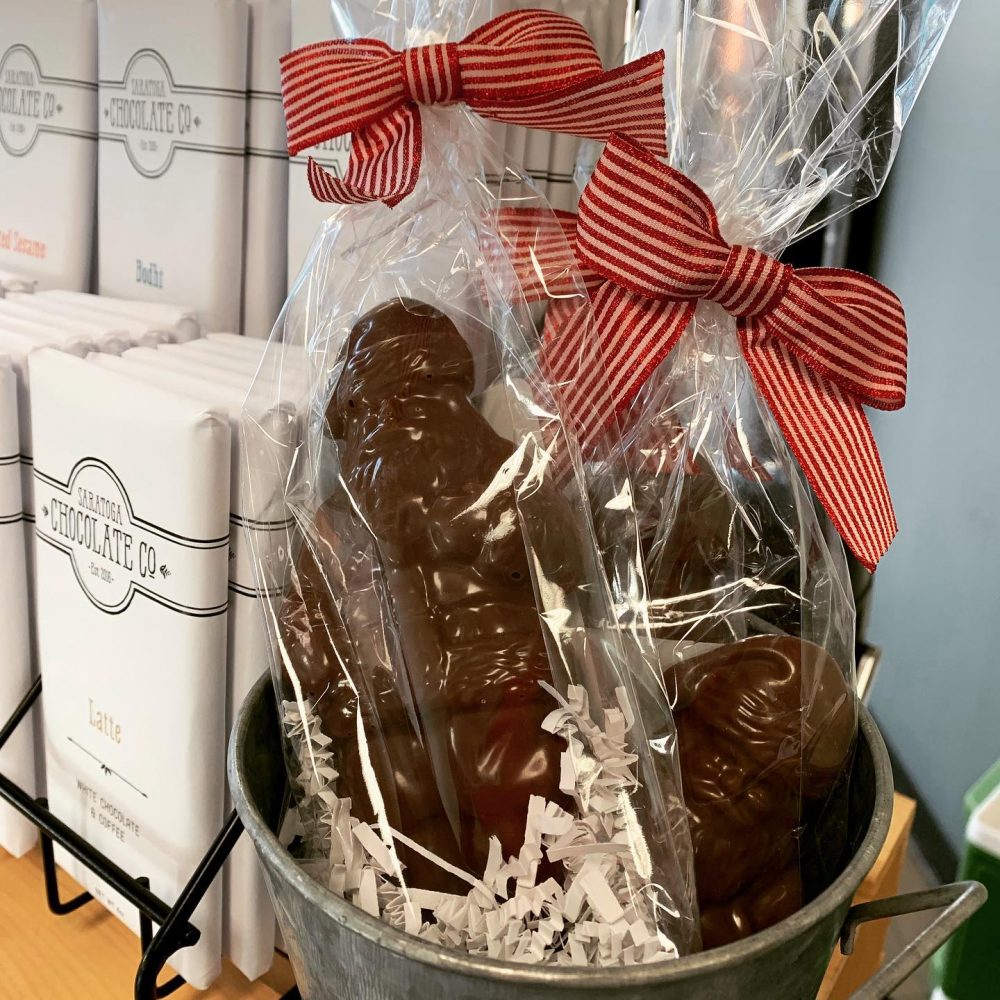 As challenging as 2020 has been so far, the holiday gifting season feels like a bright way to end a dark year. Perhaps more than ever, gift-giving is a means of reconnecting with friends and family, some of whom we haven’t seen in person for nearly a year. We also get that gift-giving can be a source of stress even in the best of times, so we have some strategic ideas to make gifting during a pandemic a little more seamless, meaningful, and even enjoyable.

● If you prefer shopping from the comfort of home, find our vendor directory and shop locally online. Find links to local businesses’ websites, Instagram, and Facebook pages. Use the DM functions or pick up the phone to ask for suggestions and place orders.
● This year, some of the most thoughtful gifts are things that make time at home more enjoyable for your friends and family. Think practical and useful.
● Get creative with whatever budget you have. A great gift does not have to cost a lot of money.

Now let’s get gifting with local businesses at the farmers’ market!

Home Decor
These days we work, exercise, relax, and even attend school at home. We recommend Feathered Antler’s original paintings and framed prints of animals and landscapes to define and decorate living spaces. Feathered Antler also has hand-painted wooden fence posts adorned with positive sayings and nature scenes that can function as leash hangers, key hooks, and jewelry organizers.

Gift Certificates & Subscriptions
Give the gift of something to look forward to, like Saratoga Farmers’ Market gift certificates. Elihu Farm offers a subscription for flavorful and nutritious eggs from their “hens on pasture.” Moon Cycle Seed Co. sells subscriptions for nutrient-dense seeds for hormonal balance. The 2021 CSA season will be here before we know it, so check with local farmers at the market to purchase a subscription for a friend or family member.

Self-care
Self-care means something different to everyone. Perhaps it’s cozying up to a cup of hot chocolate from Saratoga Chocolate Co. or making Earth to Mind’s CBD oil and rubs a part of the daily routine. There are many items at the farmers’ market to nourish and encourage self-care, like bee balm from Ballston Lake Apiaries and tinctures from Sweetbrier Farms.

Stocking Stuffer Ideas from Small Businesses
*Starred items are perishable and should be put into stockings just before gifting. 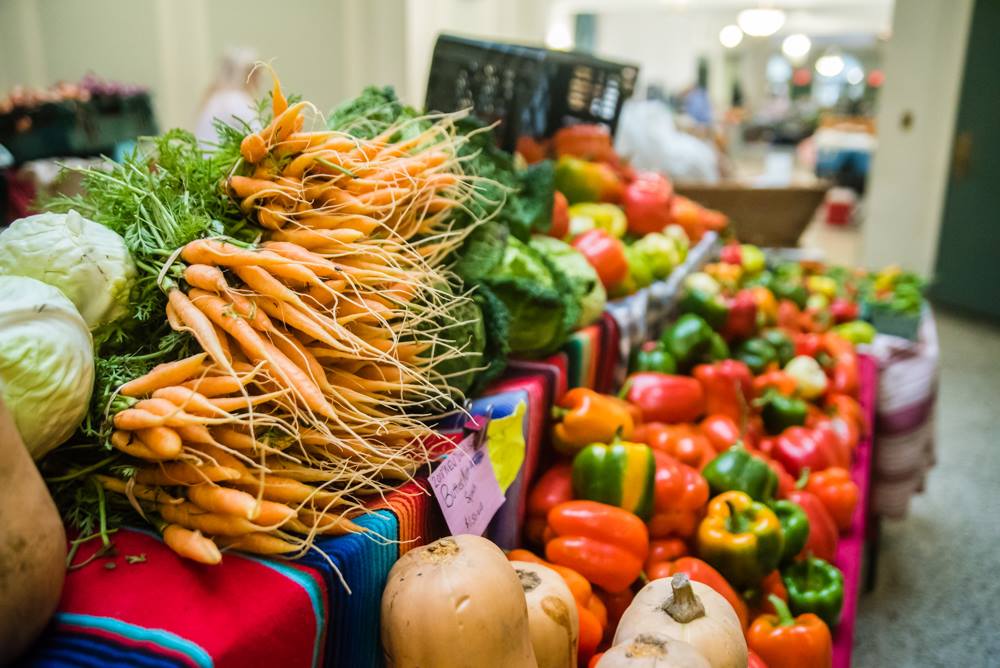 On Saturday, November 7th, the Saratoga Farmers’ Market will move back inside the Wilton Mall for the winter season. The farmers’ market will be located in the mall’s food court which is accessible by the Bow Tie Cinemas entrance and within the mall interior. Markets will run every Saturday from 9:30 am to 1:30 pm from November through April.

As days get a little shorter and a lot colder, the farmers’ market is grateful to take up our winter home in the Wilton Mall, moving indoors from our summer season in the mall’s parking lot. This indoor location will provide some much-needed warmth for vendors and shoppers alike and the convenience of one-stop shopping for a variety of products.

In order to accommodate proper COVID-19 social distancing and safety guidelines, vendors will be spaced accordingly, hand washing and sanitizing stations will be easily accessible, and crowds will be closely monitored by market representatives and mall management staff to make sure shoppers feel safe and have a pleasant experience. The Wilton Mall has also installed a hospital-grade air filtration system in its high-quality HVAC system. The farmers’ market ensures that only the vendors handle their products until they are purchased. And, masks are required to be worn by all.

While COVID-19 may have changed some of the ways we operate, we hope to offer a sense of familiarity and comfort to our community through the farmers market. The pandemic has posed some new challenges for us all but with the support of the community, we have remained a safe and reliable source for local foods and products. During these uncertain times, it is especially important to support our local farmers and businesses who are determined to bring their products to customers in the safest and healthiest way possible.

In addition to many familiar faces, we will also be introducing a number of new vendors including Fossil Stone Vineyards (wine), Bear’s Cup (bagels and other baked goods), Hebron Valley Veal (fresh meats), and Sweetbrier Farms (herbal wellness and body care goods). With 50+ vendors bringing a variety of fresh produce, ready-to-eat foods, and artisanal products each week we strive to remain accessible and affordable to our local residents throughout the winter.

Give your gut a little love during these cold, dar

Shop safely at the market! Please don't touch any

Are your healthy new year's resolutions already a