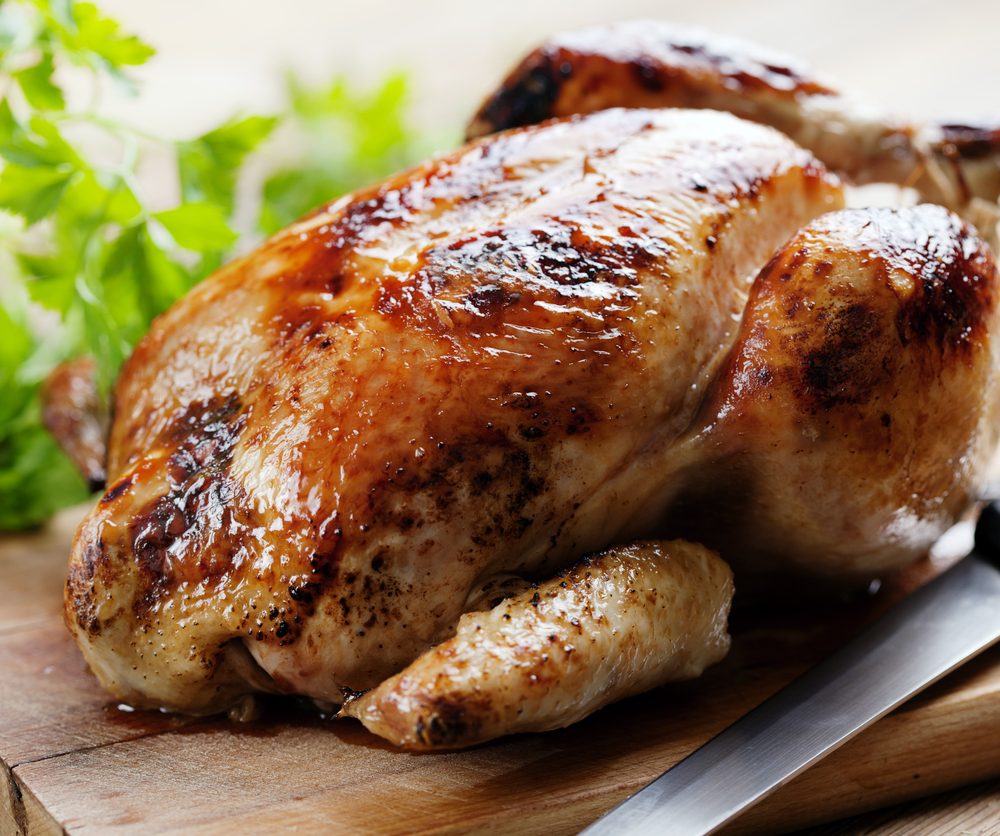 “Heritage breed chickens have well-developed flavor. Cooking them slower and at a lower temperature allows the legs and thighs to cook fully without overcooking the breasts.” 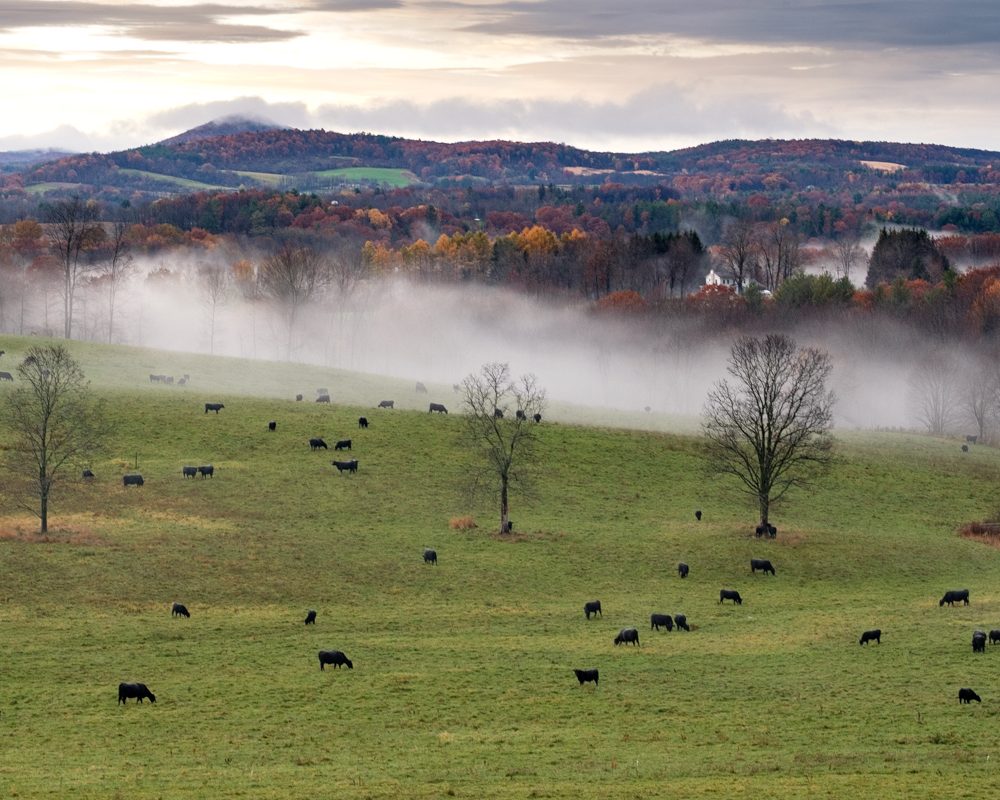 Local farmers, who offer their products at Saratoga Farmers’ Market, raise specific breeds of animals for various reasons: good temperament, ability to improve cropland and wildlife habitat, ability to produce high-quality meat and poultry, and to produce products such as wool.

Jim and Himanee Gupta-Carlson’s Squash Villa Farm in Schaghticoke is home to several heritage breeds of chicken, including Ameraucanas. This species lays remarkable green eggs and produces dark, lean meat, an attribute of its active nature.

“Ameraucana chickens take approximately six to twelve months to reach a harvestable size, compared to other breeds that can mature in just weeks,” says Jim. But Ameraucana chickens are well worth the wait. Their flavor is rich and complex and perfect for roasting and simmering in sauce or stew.

At Longlesson Farm in Buskirk, Angus cows happily graze on 450 acres, rotating between fields. One of the farm’s owners, Christophe Robert, explains that their cows breed with the best Angus bulls. Christophe bases bull selection on calving ease, growth, and meat quality, but they also focus on docility and maternal attributes.

Mary and Bob Pratt,  from Elihu Farm in Easton, have been breeding sheep for over 30 years.

“We realized that having a greater variety of fleeces would work better for our sales,” says Mary Pratt. “That meant we’d have long wool (from Romneys) and medium wool (from crossbred sheep).”

Pratt notes that the breed does not affect the taste of lamb, which mainly depends on what they eat and how long they hang at the butcher.

Hebron Valley Veal owners Ariel Garland and Matt Campbell attribute the remarkable taste of their products, in part, to their whole-milk-fed calves from the farm’s herd of pastured Holsteins. That breed is notable for its milk production.

At Pork and Greens in Castleton, pigs of various breeds spend their time rooting, grazing, and lazing through their wooded spaces. A mix of species ensures diversity in characteristics and genetics, according to farm owner Isabel Buenaga.

And, at Ramble Creek Farm in Greenwich, Josh Carnes takes pride in his herd of grass-fed Angus and Hereford cattle. It’s also home to forest-raised heritage-bred pigs and pasture-raised poultry. 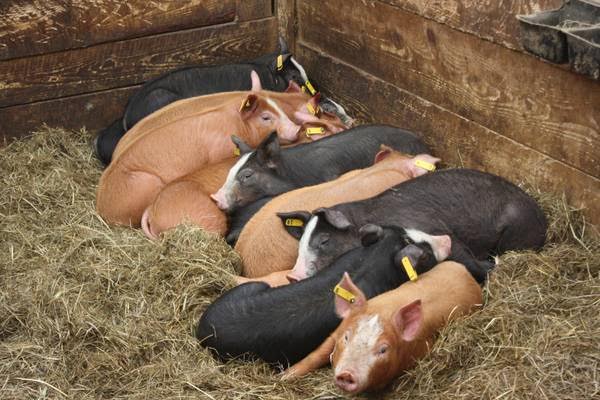 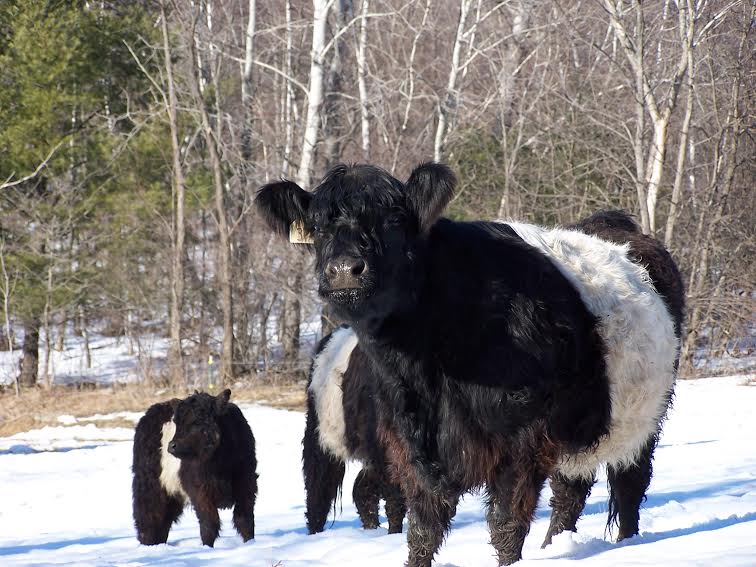 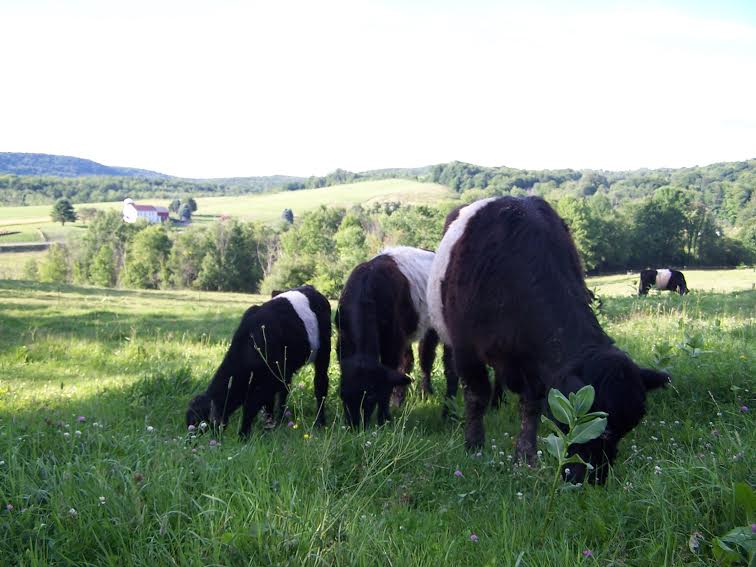 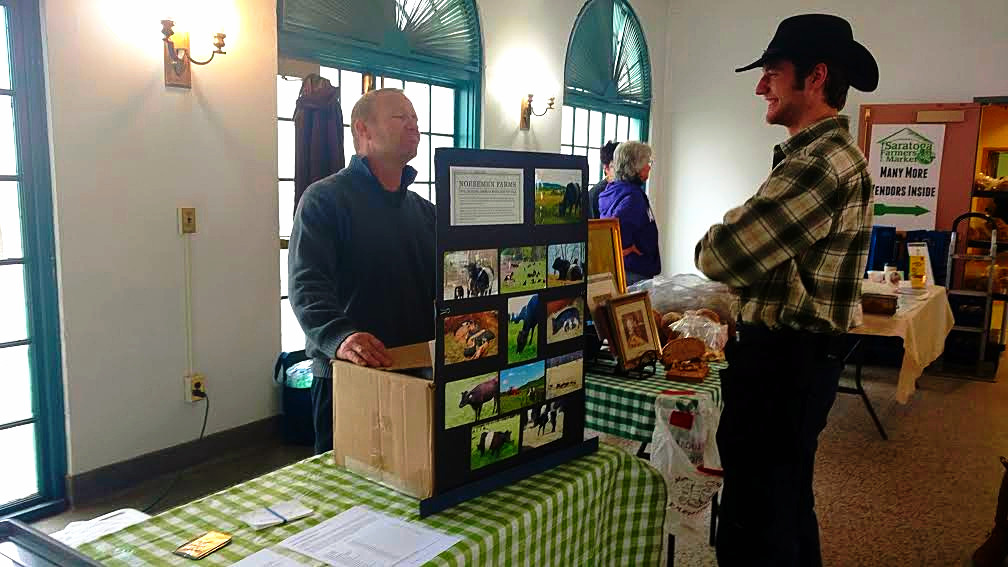 As interest in locally produced foods proliferates, many farmers who sell their products at the Saratoga Farmers’ Market are turning to “heritage breeds.” One such farm is Norseman Farms, which sells beef, pork, and poultry from a range of such breeds.

Heritage breeds are meats provide from livestock breeds that not only hold historical significance but also are bred to thrive in local environmental conditions. The rise of industrial farming limited the output of these older breeds, which makes the value of purchasing them at such venues as the Saratoga Farmers’ Market more important than ever. As a producers’ market, the Saratoga Farmers Market’s focus is on foods and other goods produced in Saratoga, Schenectady, Rensselaer, and Washington counties. This promotes local business while offering economical, ecological, and social support to the local community.

Norsemen Farms began as a small scale farming operation in 2008. Its owner, Bobby Grimm, describes the heritage breeds as producing a high-quality meat whose flavor is derived from farm stocks and practices that go back hundreds of years.

“We opened the farm in pursuit of a righteous life and to make available to the public a product that is extremely healthy and clean while also being opulent and exclusive at the same time” said Grimm. He added that the meat that Norsemen Farms raises comes “from some of the most sought after heritage breeds of animals available.”

The farm also offers grass-finished beef, which allows the cattle to subsist on a foraging diet and in turn results in a more flavor filled product that also provides 4 percent of the recommended daily value for Vitamin E compared to 1.5 percent for grain-fed beef.

In addition to offering heritage breeds of livestock, Norsemen Farms provides its providing customers cuts of meat that are free of hormones, antibiotics, and chemical herbicides. All of its animals that eat grains are fed grains free of genetically modified organisms.

Norseman Farms invites people to visit its Facebook book to learn about special events or to call 518-450-9062 to schedule a visit. The farm also sells its meat at the Saratoga Farmers’ Market at the Lincoln Baths Building in Saratoga Spa State Park every Saturday through April 30 from 9 a.m. to 1p.m.

*Some material from www.sustainabletable.org and www.beefboard.org was used in this article.

“The fresh ham is one of the finest and often least expensive cuts of meat on the pig. While there is not a lot of fat around the outside of the roast, the fat is marbled within the meat, making it juicy and delicious. Fresh hams come in all sizes, from an entire leg, weighing 12–15 pounds, to boneless roasts weighing as little as 3 pounds. The recipe below is for a 4-pound roast. If you need to cook a bigger fresh ham to feed more people, simply double the amount of herb rub, accommodate for the increased size in your cooking time, and be sure to double-check your work with an internal meat thermometer.”
– Shannon Hayes 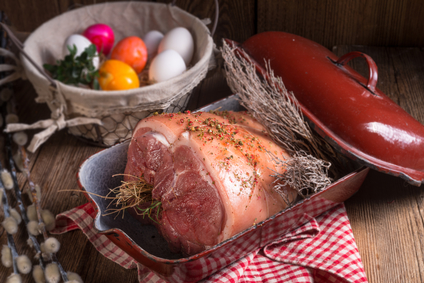 Massage the Herb Rub into all surfaces of the meat. If it has not been skinned, use a very sharp knife to cut a series of 1-inch gashes all over the skin, cutting down to the meat without piercing it. Stuff some of the herb rub into each of the cuts. Allow the meat to come to room temperature while you preheat the oven to 325° F.

Place the meat in a roasting pan, insert a meat thermometer, and roast to an internal temperature of 145–160 degrees—depending on how done you like it—about 22 minutes per pound for a boneless roast, 20 minutes per pound for bone-in. Allow the meat to rest for a few minutes before carving so that the juices can settle back down into the meat. Serve au jus (with the pan juices), or make a reduction as follows:

Remove the ham to a cutting board, then set the roasting pan over direct medium heat. Heat the pan drippings until they are bubbling. Add the shallots, Dijon mustard, and maple syrup. Continue cooking, stirring and scraping, until the shallots are clear and the browned bits from the pan are mixed into the paste with the mustard and pan juices. Add the broth and continue to simmer until the sauce is reduced by half. Add the butter one tablespoon at a time, stirring well after each addition. Drizzle the reduction over the meat and serve.