Holidays at the Market

Directions
In a saucepan, mix together the milk, sugar, vanilla and salt. Whisk over medium heat until milk steams and sugar dissolves. Whisk in chocolate pieces, stirring until dissolved. Top with a homemade chocolate marshmallow by The Chocolate Spoon. Enjoy! 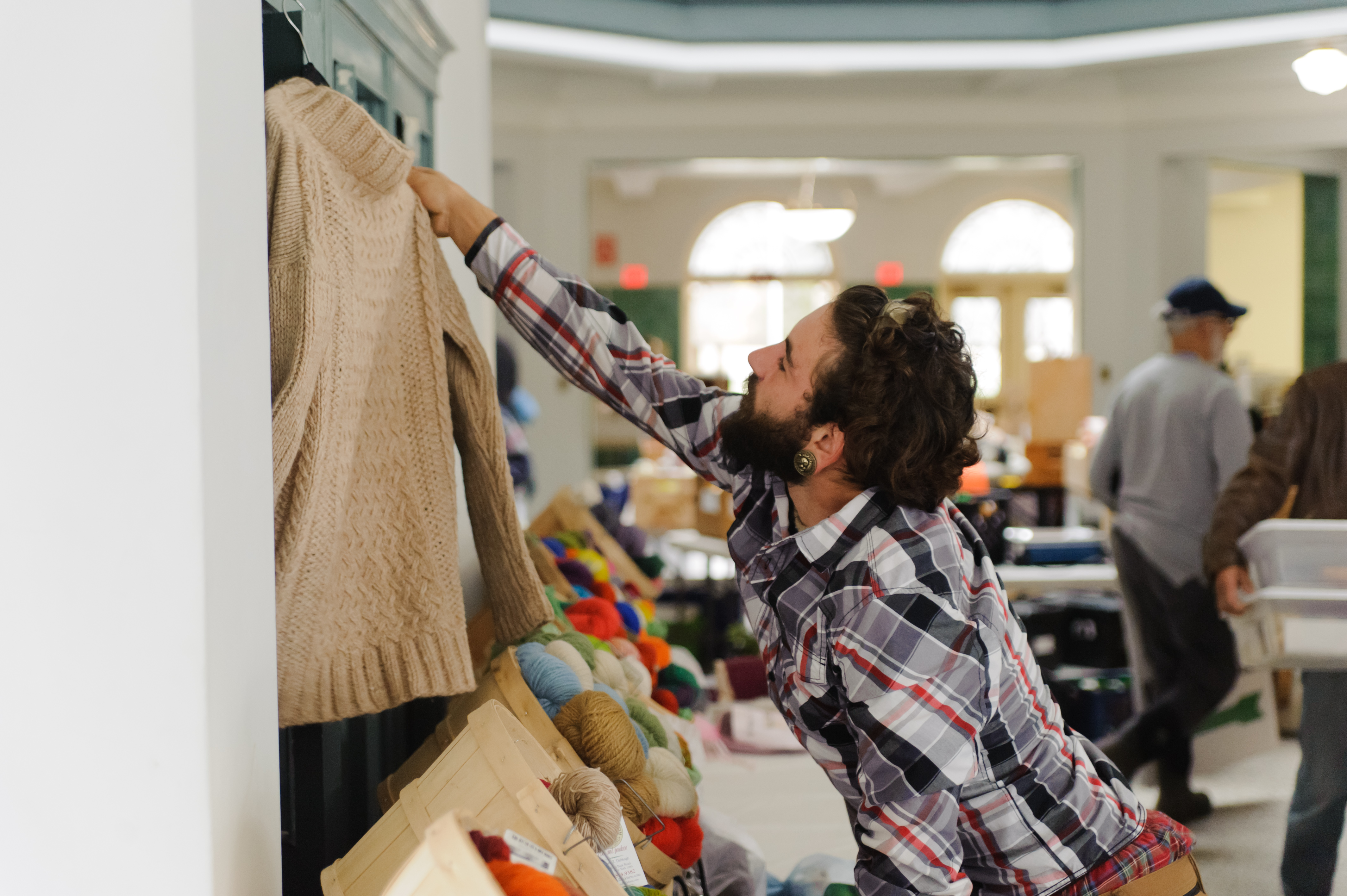 Farming and fashion are not exactly synonymous. Yet, as you visit the Saratoga Farmers’ Market tomorrow and on Christmas Eve, you might start to wonder why this is so.

In between carrots and chard, handcrafted cheeses and farm raised meats, milks and yogurts are artists who are also farmers or inspired by the agriculture around us. Their offerings of creative couture, hand-painted attire, hand-made jewelry, and warm wool items make a handmade holiday outfit entirely possible, in an innovative way.

Earrings, brooches, necklaces, and barrettes sit on Kate Brittenham’s table at Pocket Gardens. All of the items are made from native wood barks, mosses, and lichens that Brittenham gathered herself. They represent not only Brittenham’s creativity but also nature itself.

Nearby is Lubna Dabbagh’s collection of yarns, knitting and crochet kits, and hand-crafted scarves, hats, socks, sweater, and mittens from Blind Buck Farm. The wool comes from animals raised on the farm, which include Merino sheep, Angora goats and rabbits, and Luster long-wool sheep. The wool from the animals is processed in local mills, then returned to the farm for hand-dying. Local knitters and crocheters work with Dabbagh to produce her cozy creations.

Next to Dabbagh, Peggy Gray is offering her line of women’s clothing here through her Buskirk based business 22 Shades of Gray. Gray, a master seamstress, makes all of the items herself with a goal of creating clothing for women that is easy to take care of and fun to wear. Take, for instance, her circle vest – an upper body fleece wrap that can be worn two different ways.

In addition, Gretchen Tisch offers wearable art at Feathered Antler. The growing collection includes hand-painted boots, shirts, knit hats and sweaters, jewelry and dishware. Like Brittenham, Tisch draws her inspiration from nature, going out for walks, taking in seasonal changes in color and feeling, and capturing these interactions into her art.

In a way, Tisch and other artists evoke what the Saratoga Farmers’ Market is ultimately about. Like the fresh foods that farmers produce, their art is hand-crafted, eschews commonality, and is all about our relationships with the land around us.

The Saratoga Farmers’ Market will be open Christmas Eve and New Year’s Eve at its usual 9 a.m. to 1 p.m. Saturday location at the Lincoln Baths in the Saratoga Spa State Park.

Directions
In a saucepan, mix together the milk, sugar, vanilla and salt. Whisk over medium heat until milk steams and sugar dissolves. Whisk in chocolate pieces, stirring until dissolved. Top with a homemade chocolate marshmallow by The Chocolate Spoon. Enjoy! 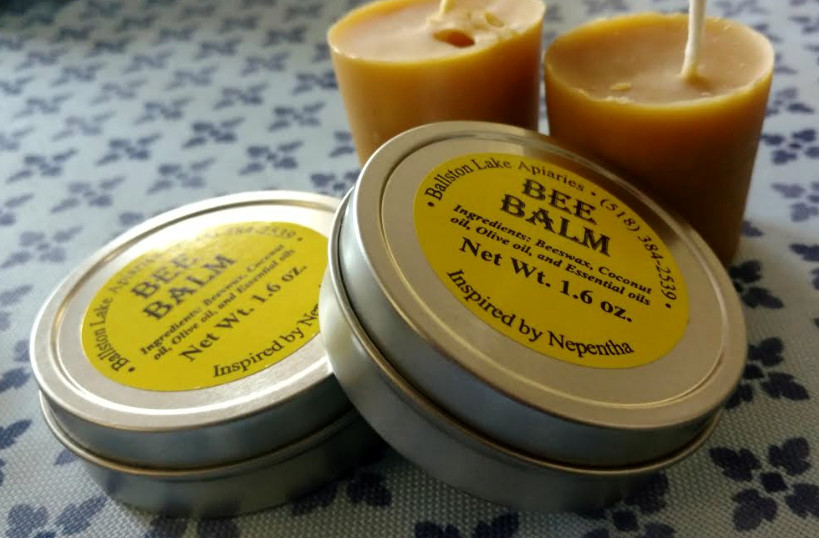 • ½ teaspoon coconut oil
• ¼ teaspoon almond oil or black seed oil
• 1 Tablespoon beeswax*
• Optional: For a colorful lip balm, use 1 whole crayon chopped into small pieces in place of beeswax. Use the color crayon of your choice

1. In a mason jar, slowly heat coconut oil, almond oil, and beeswax
2. Pour the liquid into small container(s). Try using your empty lip balm containers and make this a recycling project as well.

Note: Have paper towels or rags readily available because the process can get messy. 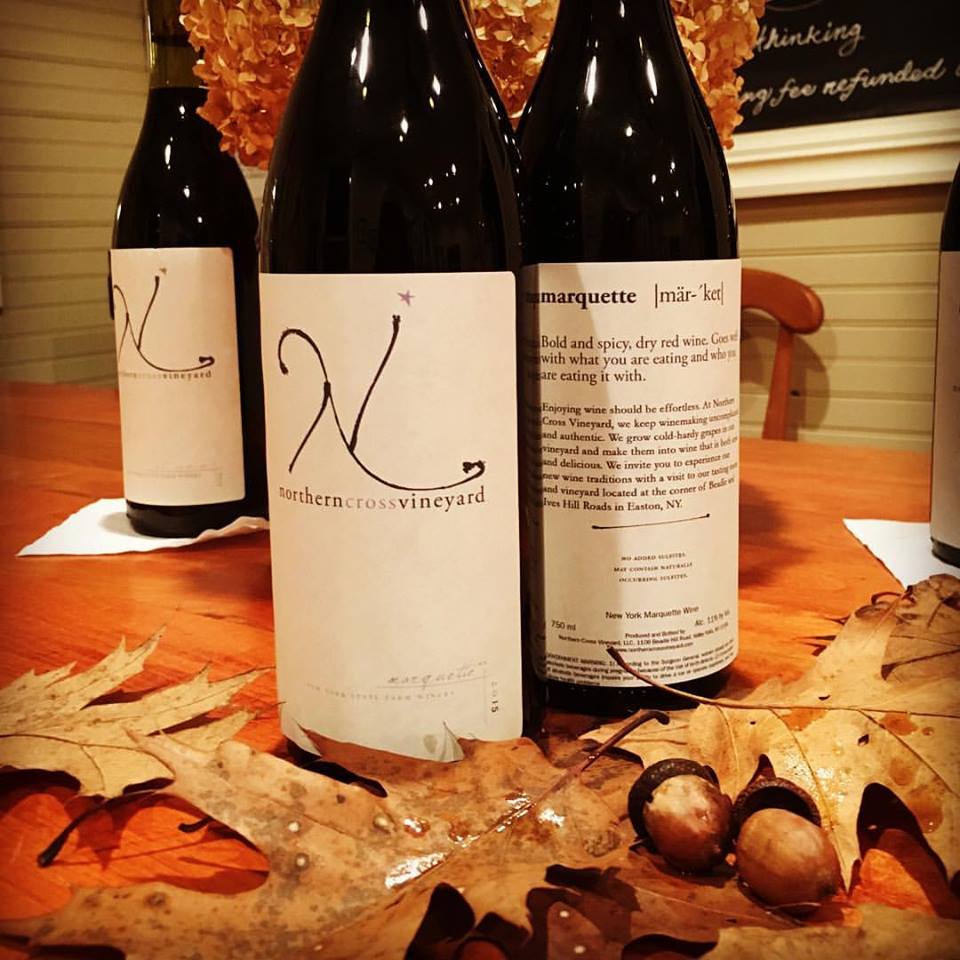 Walking outdoors in December carries a special allure. Often, it is cold – but not frigid; damp – but not soaking wet; gray but crisp. It is nature – like a cat – beginning to curl up for the winter’s nap, fully fed and content.

Much of what the Saratoga Farmers’ Market represents in its winter months interacts with this sense of nature. During December particularly, several farmers and vendors of handicraft items are offering special items that invite shoppers to join the indulgence with nature.

Check out the corn husk angels that Bliss White McIntosh has handcrafted from the husks of locally grown popcorn, goldenrod pods, and dried milkweed. Or the intricate “pocket gardens” for office desks, kitchen tables, or other tiny locations created by Kate Brittenham with native species as the focus. Consider the soaps, lip balms, and candles made by Megan Canell of Creations & Spells, and the nature-inspired designs of Gretchen Tisch with the Feathered Antler. And visit Kathleen O’Reilly’s Northern Star Vineyards booth for her Marquette red wine, aged in Washington County oak.

Many of these products come from found items. Behind each lies a storyline intrinsic to nature. McIntosh, for instance, is a gardener and basket maker. When she is not making corn husk angels, she is immersed in such projects as the community garden housed at the Cambridge schools. The garden includes a three sisters planting of the indigenous corn, beans, and squash companion combination. Her three sisters include Blue Hopi corn, red Vermont cranberry beans, and butternut squash. The students celebrated with a colorful harvest feast that included the blue corn, the red beans, and the glorious orange hue of butternut squash soup.

By making angels from husks and silks – essentially the throwaway parts of the corn we eat – McIntosh stretches the life of a plant longer.

That philosophy also infuses Brittenham’s pocket gardens. Brittenham is a Skidmore College graduate who majored in Environmental Studies. Her container gardens for homes, offices, and dorms are composed of native species grown often from seed she collected herself. “I’m a believer in genetic diversity and I want to perpetuate species,” she says. “Making these gardens is one way to prolong life and to build awareness among others.”

The Saratoga Farmers’ Market is at the Lincoln Baths Building in the Saratoga Spa State Park from 9 a.m. to 1 p.m. Saturdays through April.

1. Mix the mustard, brown sugar, thyme, ginger, and paprika in a bowl until well combined. Coat all sides of the steak cubes in the mix.

2. Remove and discard the stems from the mushrooms, clean and slice them ¼ inch thick.

3. Heat the oil in a large skillet over medium-high heat. When the oil is shimmering, add half the steak and sear them until nicely browned, 2-3 minutes per side. Transfer to a plate and repeat with remaining steak.

4. Reduce the heat to medium, add 1 Tablespoon of butter to the pan and let it melt. Add the mushrooms, the scallion whites and cook stirring occasionally until the mushrooms soften and brown, 4 to 6 minutes. Pour in the beer. Scrape the bottom of the pan with the spoon, raise the heat to medium high, bring to a boil and cook, uncovered until the liquid is reduced by half, about 4 minutes. Return the steaks and any accumulated juices to the pan, cover tightly with a lid and reduce the heat to a low simmer. Braise, turning the steaks after 8 minutes, until tender and cooked through about 16 minutes total. Transfer the steaks to a cutting board and slice them thinly. Cut the remaining 1 Tablespoon butter into four pieces and swirl them into the sauce. Stir in the scallion greens.