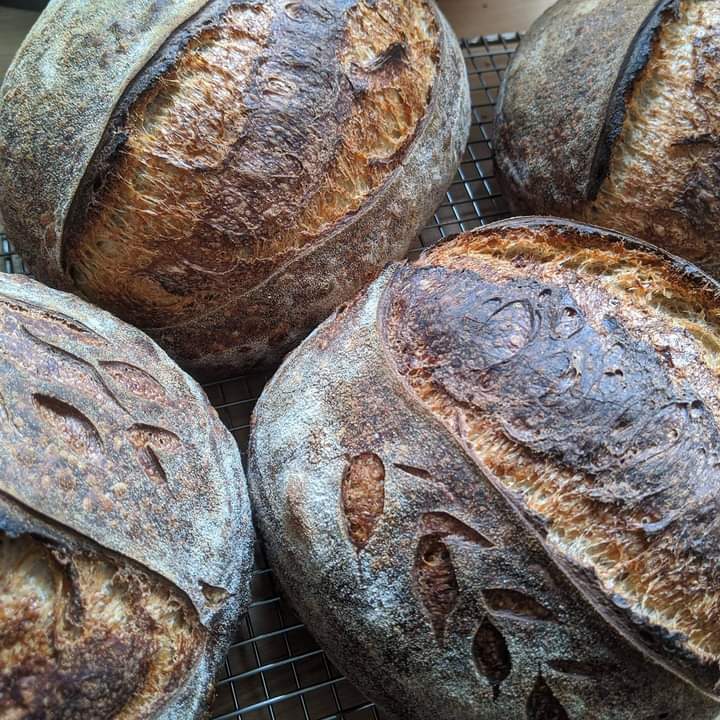 In February 2021, Leigh Rathner and his wife Cindy Rosenberg moved from Los Angeles to Saratoga Springs, where Rathner had lived earlier in life and raised his children. They had a dream: to feed people and build community. At the center was bread.

Rosenberg brings the bread to the Saratoga Farmers’ Market on Saturday mornings, where it sells fast. In seven months, Rathner has gone from making 25 loaves a week to 325.

Their feat is remarkable. Besides learning the basics of business and the many factors that influence the making of artisan bread, they have had to figure out how to build customer support as newcomers to a place where old loyalties run deep.

The secret is bread.

Rathner and Rosenberg lived in Los Angeles in a 145-unit condominium, where they knew three other people. Everyone was working or commuting. The COVID-19 pandemic brought people home, including Rathner who saw making bread as a means of calming the mind after his work dried up. As the loaves piled up, Rosenberg began distributing them. They met more people and in the once-lifeless building, a sense of community formed.

People began stopping in open-air hallways and other spaces to chat. Chats became meetups with food and drink. Neighbors began offering Rathner money to cover his bread-making costs. Then came preorders, and ultimately a product Rathner felt comfortable selling to others.

“That’s how we lived through the pandemic,” Rathner says. “Bread was a part of it.”

He and Rosenberg yearned to move to a smaller town with a strong farm-to-table ethos. Saratoga seemed like a good fit.

Rosenberg, an acupuncturist, learned how to use Instagram from one of her clients in her last days in Los Angeles. En route to Saratoga, she posted reports via Facebook and began friending people and businesses locally, including me after a mutual friend put us in touch.

Rathner’s past ties to Saratoga also helped. His children had attended the Waldorf School, and even after he left, his friendships with some Waldorf parents had remained strong.

NightWork Bread is now available at three farmers’ markets, including Saratoga, and Rathner and Rosenberg hope eventually to open a store.

Recipe shared by NightWork Bread, adapted from the recipe by Barefoot Contessa

Pro tip: You can add all kinds of great veggies from the farmers’ market to this salad, depending on your taste. Try some red or yellow bell peppers, red onion, lightly roasted summer squash, roasted beets, or microgreens. Enjoy!